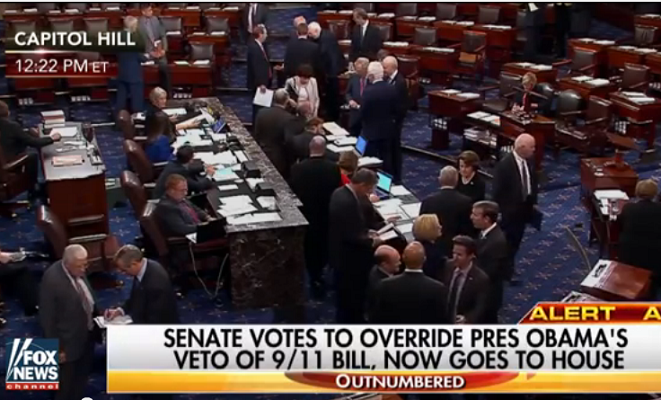 Yesterday, I wrote about today’s Senate vote expected to override Obama’s veto and today they voted overwhelmingly to do just that.

The Senate voted 97-1 to reject the veto. The measure heads next to the House, where lawmakers will need to muster a two-thirds majority, as in the Senate, to override.

Obama was fighting the override and sent a letter to Senate minority and majority leaders.

The White House was still fighting the override attempt in the final stages.

In a letter to Senate Majority Leader Mitch McConnell and Senate Democratic Leader Harry Reid, Obama warned the bill could cause chaos in U.S. foreign affairs, as other countries would use the measure to justify the creation of ways to target “U.S. policies and activities that they oppose.”

“As a result, our nation and its armed forces, State Department, intelligence officials and others may find themselves subject to lawsuits in foreign courts.” Obama wrote in a letter delivered Tuesday.

Defense Secretary Ash Carter, in a letter Monday to a senior member of Congress, said he’s sympathetic to the intent of the measure. But the legislation could lead to the public disclosure of American secrets and even undercut counterterrorism efforts by sowing mistrust among U.S. partners and allies, according to Carter.

There are similar slippery slope concerns about this bill amongst Republicans, as well.

Former ambassador to the United Nations John Bolton and former U.S. Attorney Michael Mukasey, both of whom served under President George W. Bush, warned in a Wall Street Journal op-ed earlier this month that the legislation could open Americans to such suits abroad.

“An errant drone strike that kills non-combatants in Afghanistan could easily trigger lawsuits demanding that U.S. military or intelligence personnel be hauled into foreign courts,” they wrote.

. . . . As the vote approached Wednesday, some members had said they may be wavering in their support. Sen. Orrin Hatch, R-Utah, a co-sponsor of the legislation, told USA TODAY on Tuesday that he was “thinking about it.”

Sen. Bob Corker, R-Tenn., said he had “concerns about what this bill’s going to mean to America.”

“This isn’t to me about Saudi Arabia, it’s the blowback to us because we’re the most involved in the world,” Corker said. “What you really do is you end up exporting your foreign policy to trial lawyers.”

Still, he conceded the veto would be “handily overridden” and said he hoped to revisit the issue when Congress returns from recess after the November elections.

Proponents of the bill, however, claim that the bill is sufficiently narrowly-written to apply only to terror attacks on U. S. soil.

Obama vetoed the measure last week, telling lawmakers the bill would make the U.S. vulnerable to retaliatory litigation in foreign courts that could put U.S. troops in legal jeopardy. The bill’s proponents have disputed Obama’s rationale as “unconvincing and unsupportable,” saying the measure is narrowly tailored and applies only to acts of terrorism that occur on U.S. soil.

Harry Reid was the lone hold-out in the Senate.

The White House whined once the Senate overturned Obama’s veto:

“I would venture to say that this is the single most embarrassing thing that the United States Senate has done, possibly, since 1983,” Obama spokesman Josh Earnest told reporters aboard Air Force One.

The House also voted this afternoon to override Obama’s veto.

Marking a significant defeat for the White House, the House ensured the bill will become law after voting 348-77 to override Wednesday afternoon.

I’d like to know who the 78 dirtbags were who voted not to override the veto! Sad that it has taken 7.5 years for Obama to finally get his pee-pee smacked.

Here ya’ go: Roll Call 564. Jason Chaffetz, Pete Sessions, and Daryl Issa voted no??? They got some ‘splainin to do!

Former ambassador to the United Nations John Bolton and former U.S. Attorney Michael Mukasey, both of whom served under President George W. Bush, warned in a Wall Street Journal op-ed earlier this month that the legislation could open Americans to such suits abroad.

“An errant drone strike that kills non-combatants in Afghanistan could easily trigger lawsuits demanding that U.S. military or intelligence personnel be hauled into foreign courts,” they wrote.
——————————————

No bill is perfect, and this one had some potential land mines in it.

Isn’t there a difference between uniformed military members deployed in a foreign country under a Status of Forces Agreement and a run of the mill terrorist?

To coin a phrase…

Still. You have to look at stuff very carefully. Writing a law is tricky, and even very good, very smart people can write a bad one.

Doesn’t much matter how well our law is written, they can write their own laws and if need be haul us into the world court using our own law as exhibit A.
Lawyers throughout the world are salivating.

Now, let’s leave Obama’s tiny microagression out of this. 😀

All that has gone over the dam and now, now when it seems hardly to matter, Congress delivers a first override. Did they travel to the White House, get on bended knee, and apology for taking such an action with just a few months left in his term. Heaven forbid they tarnish his legacy.

Moronic hysteria better suited to the Liberals. What the hell are these people thinking? That Saudi Arabia is going to ‘fess up and pay up? That we’ll henceforth be immune from every loony lawsuit from abroad? Vetoing this bill may be the only thing Comrade Obama’s gotten right since being greased into office.

So when the Obama led justice department, which has shown an amazing capacity to ignore written law, ignores the override, just what exactly are the house and senate going to do?

Wait, wait! I can answer that!

Absolutely not a (insert word of choice here) thing.

“An errant drone strike that kills non-combatants in Afghanistan could easily trigger lawsuits demanding that U.S. military or intelligence personnel be hauled into foreign courts,” they wrote.

What a load! Equating a terrorist attack—the deliberate massacre of thousands of harmless civilians in peacetime—and ordinary accidental collateral damage in a genuine war? People aren’t usually that dumb. How does one become so intellectually perverted? Is it law school which does it? Some weird Yale thing?

Obama again demonstrates his allegiance is with the Saudis over the American people.

Sadly, Obama’s predecessor did the same. But hey, it makes my Lockheed-Martin stock go up so I’m OK with it. /sarc

When I saw only one “no” vote in the senate I immediately thought it had to be Harry Reid. What a lame, grandstanding attention whore douche.

“I would venture to say that this is the single most embarrassing thing that the United States Senate has done, possibly, since 1983,”

When the globalists wanted to regulate the internet, the US courts kept slapped their hands saying: NO! NO!

Now our illustrious congress feels free to open a can of worms here while ignoring the globalists who will transfer regulation of the internet out of the jurisdiction of US courts.

It’s a two ‘fer: 1. our courts will no longer be able to defend freedom of speech and 2. African nations will be free to sue us for slavery.

Nice election year grandstanding but I can’t see how this will do anything but open Pandora box.

Hey, Laos still pussy about Air America? File a lawsuit. Yo, Mexico, unhappy about the 300 some odd citizens killed by weapons killed by weapons connected to Fast and Furious? File suit. Say, PI, Guam, Marshall Islands, Okinawa and wherever else, still red a** over the environmental damage done by the US military? Yep, you too can now call Saul!

Seems like Congress failed learning simple linear logic, imo. Then again, I’m not a lawyer so maybe there’s something I’m not understanding.