The problem is not Peled, but that BDS is a Settler Colonial ideology that thrives on negative stereotypes of Jews. 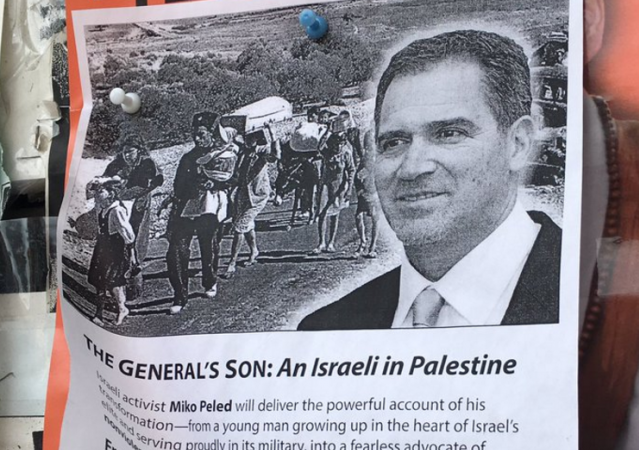 Local branches of JVP, such as the NYC branch that disrupted a City Council commemoration of the Liberation of Auschwitz and the Ithaca (NY) branch that conducted an anti-Israel event for public school third graders, often are even more radical than the national JVP.

Because BDS is a Settler Colonial Ideology which seeks alliances and to co-opt other movements through the concept of intersectionality, BDS of necessity singles out the Jewish Israeli as uniquely evil and the source of problems in the world. The distinction between Israelis and Jews quickly evaporates, as we witness in Europe where anti-Israel protests frequently use blatantly anti-Semitic rhetoric and where Jews are attacked on the street in the name of anti-Zionism.

So, it is no surprise that while groups like JVP disavow anti-Semitism, BDS attracts both open Jew haters and those who traffic in negative Jewish stereotypes in the anti-Zionist cause.

Others include BDS academic leaders like controversial hate-tweeting Professor Steven Salaita who, while professing love for Jews and only hatred for Zionists, trafficked in negative stereotypes and blamed Zionists in part for anti-Semitism. As if anti-Semitism did not exist prior to the creation of Israel in 1948. As a Salaita supporter, Prof. Feisal Mohamed, wrote (emphasis added):

My feelings on the tweets are not so different from yours. Those who brand them as anti-Semitic are wrong, but those who claim that they are completely devoid of anti-Semitism are not quite right, either. Salaita’s tweets frequently trade in a kind of anti-Zionist rhetoric that summons and sustains millennia of anti-Jewish sentiment hard-wired into Western culture. Nobody should be fooled when people adopt a posture akin to saying, “I am completely opposed to anti-Semitism, but I think Zionists would kill Jesus given half a chance.” There is a certain kind of person who, to paraphrase Marvell, doesn’t break his shins but by stumbling upon a Zionist. Steven Salaita may or may not be such a person; he certainly can tweet like one. But I hasten to add that this is a far cry from inciting imminent lawless action, or spreading hate speech, or any other form of expression that Western democracies have proscribed.

Attracting people who peddle in negative Jewish stereotypes — or worse — presents a problem for JVP which appears to be trying to mainstream itself. Thus, JVP felt compelled to disavow Alison Weir, though some of its chapters still welcome Weir.

We have not written before about Miko Peled, an Israeli who is an anti-Israel pro-BDS activist based on the West Coast.

His main claim to fame is that his father was famous Israeli General Matti Peled. Miko’s book, The General’s Son, is his talking point when he makes his frequently visits to campuses. Being Israeli and from such a prominent Zionist family gives Peled a seeming credibility on the stump that few other pro-BDS speakers have. But his rhetoric is every bit as vicious, nasty and inflammatory as just about anything we see.

The story is one that is reminiscent of the Weir disavowal. At some point, the rhetoric becomes just too toxic, too much playing on centuries old negative stereotypes of Jews as a means of making anti-Israel arguments.

This is the tweet that started the ball rolling down hill, saying that in light of the Memorandum of Understanding (MOU) recently signed for future military aid to Israel, Israelis should not be “surprised Jews have reputation 4being sleazy thieves….”

That tweet, and Peled’s defense of it, led to cancellation of a campus appearance at Princeton organized by the Princeton Committee for Palestine, which expressed its disgust on Facebook: 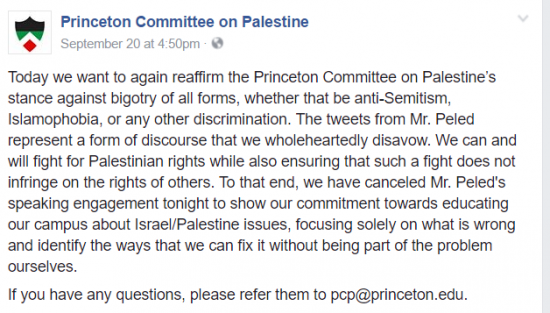 Here is the flyer posted announcing the cancellation: 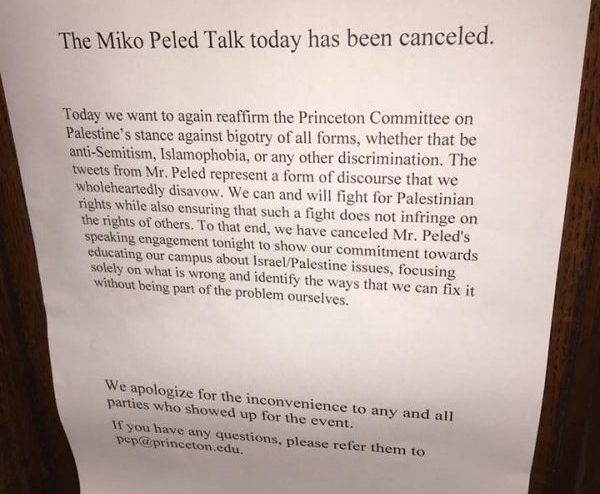 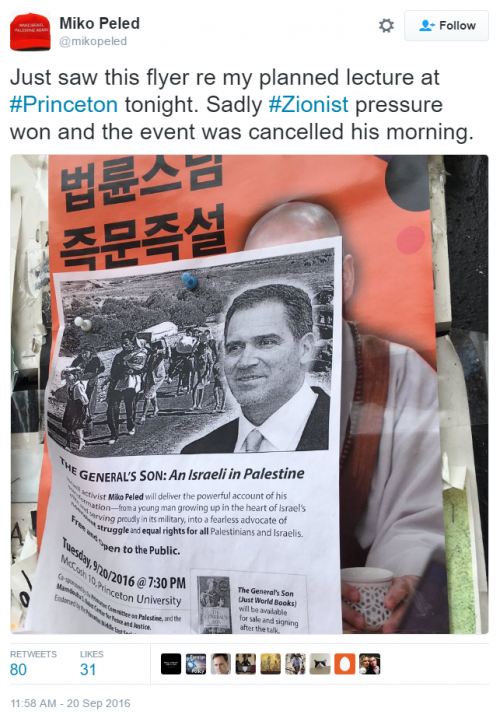 The cancellation received surprising support from JVP, which tweeted “antisemitic language is not acceptable in our movements for justice.” [If only that were true.] 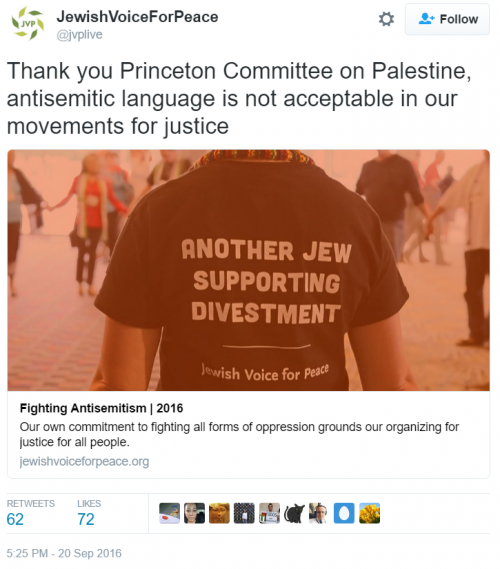 Rebecca Vilkomerson, Executive Director of JVP, tweeted that “Princeton group did right thing cancelling @mikopeled talk b/c of his tweets-no place 4 antisemitism in our movement.” 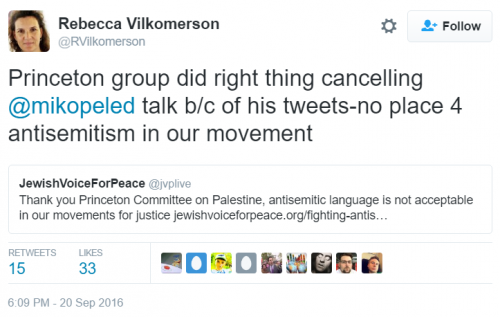 Peled rejected the accusation, as did Alison Weir when she was disavowed by JVP, in a series of Facebook posts and tweets which doubled-down on the rhetoric, including blaming Israel for “playing into the hands of racist antisemitism” — in other words, blaming Jews for anti-Semitism. 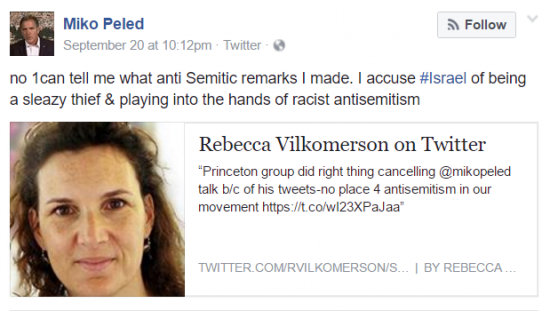 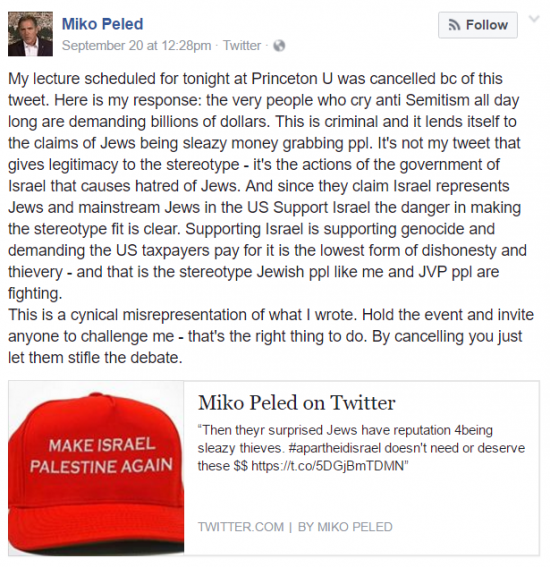 The lesson in this story is not that Miko Peled’s appearance at Princeton was cancelled, or even that his rhetoric caused JVP to disavow him. Peled is a symptom of a greater problem.

The problem is the gross demonization and dehumanization of Israelis by the BDS movement, which has consequences. One cannot engage in the hyperbole and slander that accompanies BDS, such as accusations of Israel organ harvesting, without both stoking anti-Semitism and attracting open and more subtle anti-Semites.

In order to truly purge its ranks of anti-Semitism, BDS would have to change its Settler Colonial ideology, and stop treating the Jew as the link to all evil in the world.

The Jew Washers suddenly discover that when you go to bed with dogs you wake up with fleas. And given borderline neo-Nazis like Weir, my apologies to fleas.

Actually, this is a win for Peled AND JVP. Peled gets to cry persecution, and JVP gets to look all sensitive to anti-Semitism. In reality, both are anti-Semitic through their long practice of anti-Israel slander. Let the anti-Semite speak, but make him defend his lies about Israel, captured and documented here: http://www.youtube.com/watch?v=nrC4lHD7Y6g

Miko Peled spoke at UC Irvine in 2013. He is a hot tempered jerk who tried to stop me (unsuccessfully) from videotaping his talk.

It’s gotta be pretty bad when you get disavowed from the anti-Israel movement by JVP.