There is no low too low for anti-Israel activists. 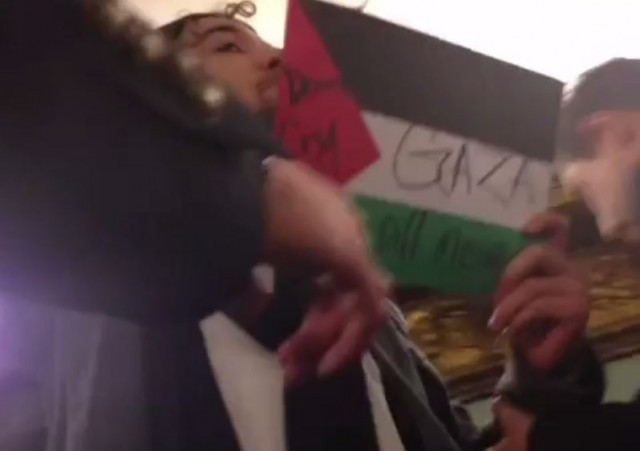 This has to be a new low.

Anti-Israel activists in New York City have started a campaign as part of the Boycott, Divest and Sanctions movement to try to prevent City Council members and other politicians from visiting Israel. A coalition of 40 groups, most of which are quite small but including the usual suspects like the inaccurately named Jewish Voice for Peace are leading the effort.

At a NY City Council meeting today, anti-Israel activists disrupted a vote commemorating the 70th anniversary of the liberation of Auschwitz, shouting for one of the council members not to travel to Israel, as reported by Jacob Kornbluh at Jewish Political News & Updates website, which has video:

Pro-Palestinian and anti-Israel activists disrupted the City Council’s stated meeting on Thursday while members were voting on a resolution commemorating the 70th anniversary of the liberation of Auschwitz.

The protesters started yelling, “shame on you, Melissa”, “why are you supporting an apartheid” and “Palestinian lives matter.”

After five minutes of yelling and screaming, the some 40 protesters were ordered to leave and escorted out the balcony.

Council member Cory Johnson called it “incredibly disrespectful and offensive. Simply awful.” Councilman Mark Weprin added, “The State of Israel has never supported the killing of innocent people, and they want to love in peace.”

“I am still shaken, upset and angry,” Councilman David Greenfield. “Shame on them for hating Jews.”

“But I’m pleased, because we can stop pretending that this is about Israel. What we saw here was blatant antisemitism, good old fashioned antisemitism,” Greenfield roared. “They were angry, you know why? because Hitler did not finish the job.”

The trip to Israel is a message that “we will not be cowered by this fear and hatred,” he added….

Speaker Melissa Mark-Viverito said in an emailed statement, “At a time when the Council was voting on a resolution commemorating the 70thanniversary of the liberation of Auschwitz, this outburst was offensive, outrageous and counter to the values of the City Council.”

One of the people in the protest recorded Vine loops(h/t Gothamist).

Greenfield reacted in an impassioned speech from the floor of the Council:

Jewish Voice for Peace is trying to claim it meant no disruption of the Holocaust memorial — really, they just happened to be there at that moment and choose that time to disrupt? 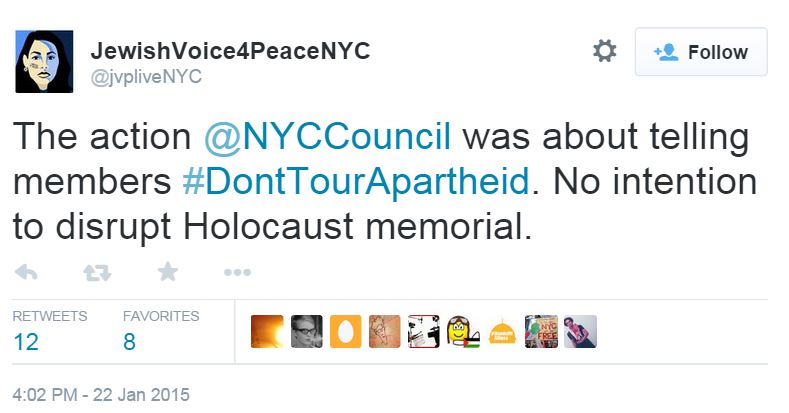 The NYC2Palestine movement was credited with the disruption. This is the same movement I have written about extensively as trying to hijack the Ferguson, Eric Garner and Black Lives Matters movements: 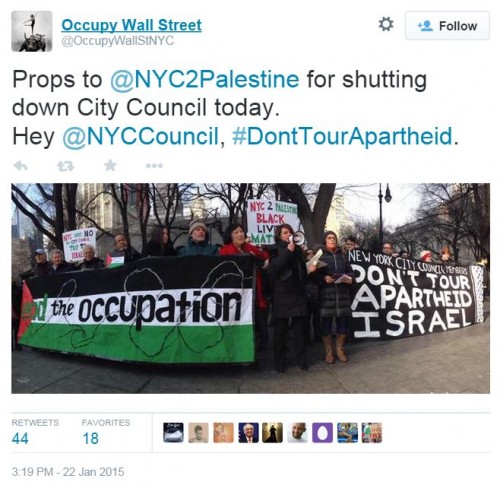 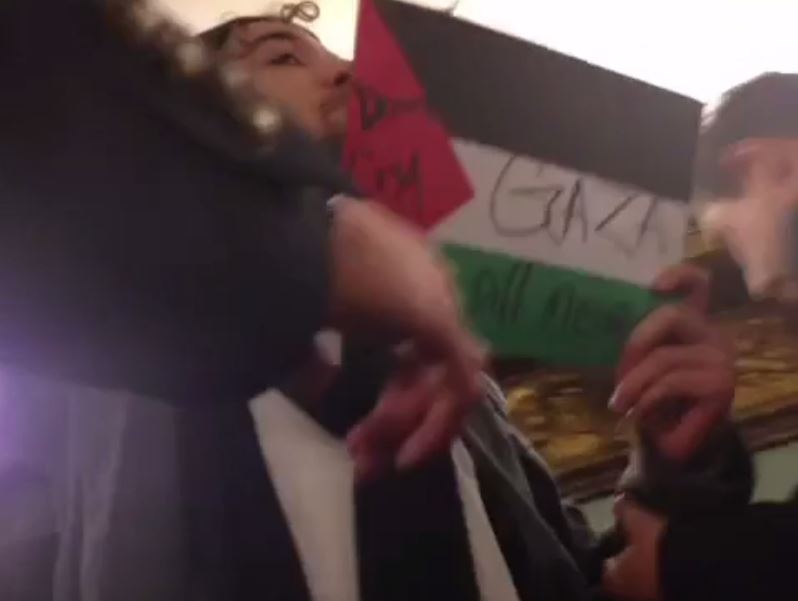 On one hand, it is good that they are exposing themselves for what they are, but on the other, it is disturbing they feel comfortable in doing that.

I love how they are claiming that they “shut down” the council meeting, funny all it looked like to me was they made themselves look like morons and than were lead off like spoiled children.

“No intention to disrupt Holocaust Memorial.”

Ooooooh, NO! Why, you just tripped, and BAM! there was this room full of people, and these funny, crap-tac-ular exclamations came busting out.

While you were carrying Palestinian flags.

Who are they trying to kid?

It might be fun to publish a list o the usual suspects and their group names, and then watch where they pop up.

Was this covered by the NY Slimes?

Not only do these infantile leftists have no respect for the memory those who were murdered at Auschwitz-Birkenau, but they also show no respect for the soldiers of the Red Army’s First Ukrainian Front, who liberated the camps after advancing over 120 miles from their bridgehead across the Vistula in fifteen days.

It’s time to step back and take a look at where we are: we are far down the road to chaos. We need to act like it. So do the idiots running the GOP.