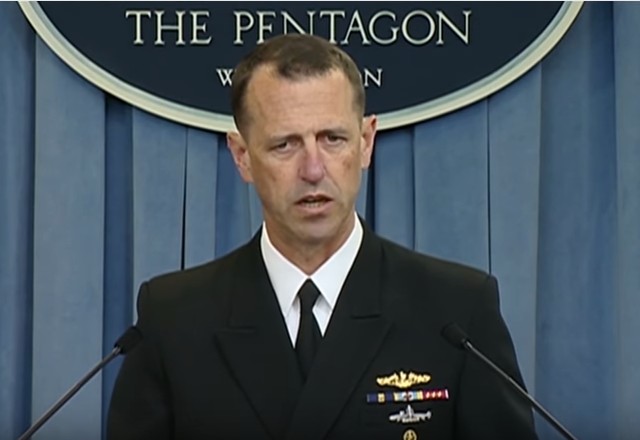 Numerous news reports have covered the Navy’s report on the capture of ten U.S. sailors in January by Iran, notably the Navy’s decision to discipline nine officers and sailors over the incident. But the media buried a bigger part of the incident in the Navy’s report. Here’s Politico, quoting from Chief of Naval Operations Admiral John Richardson:

Richardson said a number of serious mistakes contributed to the sailors’ capture, but he reiterated they broke no international laws and “had every right to be where they were on that day” because the laws of the sea allow for what’s called innocent passage.

“The investigation concluded that Iran violated international law by impeding the boats’ innocent passage transit. They violated sovereign immunity by boarding, searching and seizing the boats and by photographing and videotaping the crew,” Richardson said.

Also note that in Richardson’s prepared remarks, the statement about Iran’s violations of international law is the first topic he covered.

If the Iranians had behaved in the proper manner expected of them under international law – the way the U.S. behaves, the way most other nations behave – there would have been no incident. Period, full stop. Because there was no reason for one.

But of course this isn’t how the media has reported the incident or how the U.S. will treat Iran because of this incident. That’s because, as Dyer writes, “that it’s not up to Richardson … to raise them with Iran. It’s up to John Kerry and Barack Obama.”

Contrast Adm. Richardson with a former member of the U.S. Navy, Secretary of State John Kerry. Kerry has maintained that the channel that was opened to Iran over the course of last year’s nuclear deal has been helpful to U.S. interests. He’s mentioned that his ability to communicate directly with Iranian Foreign Minister Mohammad Javad Zarif prevented the seizure of the sailors from becoming a bigger crisis. It’s a point he again made last week at the Aspen Ideas Festival:

There’s not – there’s no question that it opened up the opportunity for communication. I mean, when our sailors stumbled into Iranian territory and got held, two years ago we wouldn’t have known who – we would have called the Swiss. We would have called some other country and said, “Can you help us?” And enough time would have gone by and there would have been sufficient level of enmity that those guys would have probably been hostages and we’d have had another situation. But within 30 minutes I had my counterpart on the phone. Within an hour and a half we had a deal. It was clear they were going to come out and we were going to not make this a bad moment in what we were trying to achieve. So that’s a benefit that came out of the whole process.

In contrast to Kerry’s description of the incident as a diplomatic victory, Iranian leadership has portrayed the capture of the sailors as a military victory over the United States. Iranian Supreme Leader Ayatollah Ali Khamenei called the capture “God’s deed,” and later gave awards to the commanders involved. Iran plans to build a statue to commemorate the event.

One of the most damning points of the now famous profile of Deputy National Security Adviser Ben Rhodes by David Samuels in The New York Times Magazine published two months ago was Rhodes’ reaction to the capture of the sailors.

Standing in his front office before the State of the Union, Rhodes quickly does the political math on the breaking Iran story. “Now they’ll show scary pictures of people praying to the supreme leader,” he predicts, looking at the screen.

The timing of the sailors’ capture was all too inconvenient. It was the day of President Barack Obama’s final State of the Union speech and just days before the United States was to announce Implementation Day, the confirmation that Iran was now to be considered a good actor in nuclear matters and the end of U.S. imposed nuclear sanctions on Iran. Rhodes’ first reaction was not outrage provoked by the illegal Iranian capture of ten U.S. sailors, but how can we hid the story from the American people. As I described his mindset at the time.

It isn’t outrage, but maybe people will misunderstand. Of course the problem is that when fed the news straight people understand too well; it is Rhodes’ job to obfuscate what happens so they don’t question the administration.

When it wasn’t possible to hide the story, Rhodes, the frustrated novelist, rewrote it. It wasn’t an Iranian provocation, but a chance to build on the success of the nuclear deal.

Richardson repeated the point made by Sen. John McCain immediately after the incident and later by Secretary of Defense Ashton Carter that Iran violated international law by seizing the sailors. That has not been the dominant news about the incident because of the administration’s very effective echo chamber.

Maybe mistakes were made in handling the capture of the sailors, but as Richardson said the sailors “had every right to be where they were that day.” Without Iran’s actions there would have been no crisis. Richardson’s charge that Iran violated international law is one more reminder that after the incident Kerry thanked Iran for resolving a crisis it created.

Perhaps next time the Administration should convey its message in a language the Iranians speak: rapid armed intervention.

Rapid Armed Intervention. You mean like we did in Benghazi? Oh wait…

I’m sorry and I mean no disrespect, but Admiral Richardson is dumber than a post. These people — our Mussulmen enemies — don’t acknowledge or follow Western laws. It’s total huff-n-puffery to say that they broke the law. That’s naive and parochial. The Iranians are probably laughing their asses off at that remark.

The Iranians “broke the law” when they took over our embassy in 1979. Law? Law? We don’t need no stinkin’ law.

It’s a real shame that a man as powerful as the CNO has so little perspective as to accuse our enemy of breaking the law. It’s clear that he — and by definition — the folks under his command think that our enemies play by the rules. Richardson has so little understanding of other cultures and the global environment that he thinks that accusing Iran of breaking the law has ANY meaning whatsoever. It just makes him — and the United States — look stupid.

It’s easy to understand why there was such a failure all down the line on this incident. These guys are so insular and have such a a narrow world view that they don’t realize that we’re not in Kansas anymore.

Now I ask you: will you sleep well knowing that our CNO is so out of touch with reality?

That is all … oh, and happy Fourth of July.

This is nonsense. Moslems are not some sort of monster. Iran is a sovereign nation, well aware of “international law” (and of its non-binding nature) and paying it the same lip service that we do. In this instance they made a deliberate decision to break it and see what the response would be, and it was exactly what they expected, which confirmed what they thought was the situation in Washington.

The administration pretended that the seizure was lawful, and therefore we had no right to retaliate, and had no choice but to negotiate for the sailors’ return. Therefore we should be grateful that we had this improved relationship which saw them returned so soon and with so little damage. Had the public realized that this was not the case then it would not have bought that narrative, and would have demanded to know why we had not responded with arms, either to rescue our sailors or to capture some Iranian prisoners who could be exchanged for them.

The public would also demand to know how we could go on trusting the Iranians to keep their word when they flouted the law like that. A bank robber’s pinky swear isn’t worth anything. These were all questions the administration would rather not have faced, so they put up this act that the capture had been lawful.

“Dumber than a post” and “I mean no disrespect” usually don’t appear in the same sentence, so your opener is creative I suppose.

Iran should be on the same path that Iraq was in – UN resolutions, coalition of the willing, etc – but neocons aside, there’s not much appetite here for another Iraq war. Maybe sanctions would have helped, but we’ll never know since Obama took us off that path and put us onto another based on wishful thinking. We’ll see how that works out – spoiler alert, it won’t – but in the meantime its perfectly reasonable for Adm Richardson to give us an early indication of whether Iran is living up to international expectations or not.

Also your comment implies that the US is in a declared war with all muslim countries, which it most certainly isn’t. The US wouldn’t be able to function in the middle east without the support of countries like Qatar, Kuwait, Bahrain, UAE, etc. The dream scenario for ISIS is that all 1.6 billion muslims in the world do come to believe that the US is at war with them.

Believe me, I gag on Bush’s “religion of peace” rhetoric just as much as anybody else, but I also know its a calculated move to placate 1+ billion muslims into, if not joining us, at least staying on the sidelines. What Obama is missing is that the other part of Bush’s strategy was to blow the hell out of Al Qaeda in the meantime to discourage any perception that they’re making or could ever make any headway. That strategy’s as old as Alexander, and that’s obviously the part that Obama’s not doing, which is why ISIS is getting new recruits and doing those “assisted lone wolf” attacks.

Obama et al are Pro-choice. It’s the “secular” equivalent of the Islamic doctrine. Iranians privately select and choose what suits them in the moment.

Bottom line: for the most part, (1) the American news media is on the Iranian side, and (2) so is Obama.

Today, the vast majority of American news and media exists as a propaganda machine for the left. Remember that next time you watch one of their tv shows, or pay to go to their movies.

John Kerry thanking the Iranians reminds me of the masochistic patient thanking his dentist in “Little Shop of Horrors.” Now that I think about it, that title fits this administration’s State Department to a “t.”

Wow, you folks totally missed the parts of the report about how the Navy sailors were astonishingly incompetent, and allowed by their commanders to be incompetent, in the carrying out of their duties before and after capture. Other websites actually reported on that, but not this one! Why, the spin seems to be that the administration failed the Navy.

Be that as it may, the Navy also failed itself and America, simple and plain facts that deserve better than to be buried under an avalanche of spin, Iran’s bad faith action notwithstanding. (It’s Iran! Shouldn’t the Navy expect bad faith?)