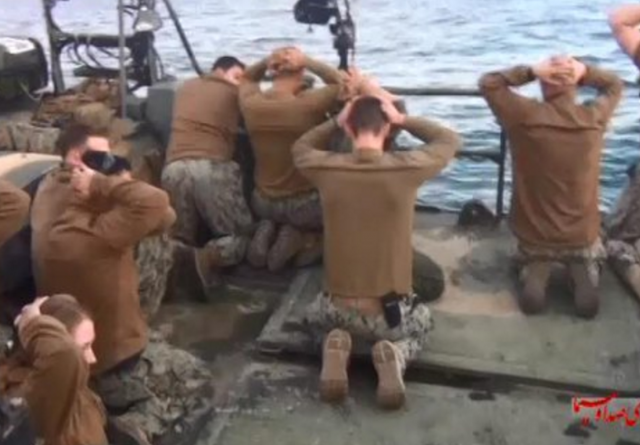 It seems that Iran is having trouble getting the Obama administration to understand just how little it respects or fears Obama’s America.

They do keep trying, though.  They bully and cajole the Obama admin while dangling empty promises and outright lies before them, and they repeatedly declare that their goal is, first, the destruction of Israel (wipe Israel off the map), and second, the destruction of the United States (we’re the “big” Satan after Israel’s “little” Satan.).

That’s okay, the Obama admin assures us, Iran doesn’t mean what its leaders say (there may be a certain amount of projection here).  Iran does love and respect—if not America then—its fearful leader.

Iran’s theocratic leadership shakes its head in disbelief  . . . and pure joy.  How weak! How malleable! How ineffectual!  Iran loves a weak American president as Jimmy Carter found out to the detriment of his second term dreams.

Pushing the envelope, Iran has. without much notice and with zero rebuke, flown a drone over a U. S. aircraft carrier , test-fired multiple-range missiles, and recently, somehow managed to capture 10 American sailors.  The subsequent world-wide humiliation of our sailors was clearly meant to serve dual purposes: convince the Iranian people that the U. S. is a paper tiger that will bow and scrape . . . no matter what Iran does.  The second purpose was to undermine the American president and his grovelling Secretary of State who had the temerity to thank Iran for the treatment of our sailors.

There was a lot of outrage about Iran releasing photos of American sailors on their knees.  This photo release was not necessary, and it was clearly intended to poke Obama and Kerry.  Obama and Kerry, though, didn’t see a problem with these images.  Iran decided to up the ante, get a bigger stick with which to poke lame and passive American leaders.

Last month, they reenacted the capture and humiliation of our sailors in a “Revolutionary Day” parade:

Yesterday was Iran revolution day and their parade included a reinactment of the capture of American soldiers. pic.twitter.com/mrm5c85U3t

As David has noted here at LI, Obama’s passivity and weakness puts Iran in the driver’s seat.  And Iran knows it.

What’s next?  Iran is building a statue of the ten captured sailors, on their knees, as a propagandistic tourist attraction.

Iran’s Revolutionary Guard is planning to build a statue of the US sailors who were captured in Iranian waters earlier this year, a senior officer said.

The provocative proposal is likely to cause outrage in the US and be seized on by Republicans opposed to President Barack Obama’s nuclear agreement with Iran.

Commander Ali Fadavi, the head of the Guard’s naval forces, said the monument of the surrendering Americans would be a “tourist attraction”.

“There are very many photographs of the major incident of arresting US Marines in the Persian Gulf in the media and we intend to build a symbol out of them inside one of our naval monuments,” he told Iran’s Defense Press news agency.

. . . .  The statue is likely to be built on Kharg, a small Iranian island in the Persian Gulf not far from where the sailors were captured.

The monument could feature as a stop for travelers on the Rahian-e-Nour, a semi-mandatory pro-regime pilgrimage that takes visitors to historical spots from the Iran-Iraq war and extols the virtues of the Iranian military.

“Iranian society is divided into three groups: the Hizbullahi believers, those in the middle, and those who don’t believe in and protest against the system because of small problems,” says an intelligence officer in Ahvaz who volunteered for the war effort at age 11, and could not be named. “If there is a war [against the US], the believers will fight, and many in the middle and some in the third group will join them.”

Such beliefs are particularly potent at this time of year, as Iranians celebrate their New Year, and students and families take organized trips, steeped in ideology and patriotism to the former front lines, called “Rahian-e Nour,” or “Followers of the Light Path.” Pilgrims climb on old tanks and hear of miracles, sacrifice, the power of prayer and selflessness – all of which aim to reinforce commitment to Iran’s Islamic system.

At the battlefields, witnesses say that some people fill small plastic bags with front-line soil as a reminder of their journey to the root of “sacred defense.” Officials say 600,000 Iranians visited last year; the figure this year is up 20 percent.
http://www.csmonitor.com/2007/0327/p01s03-wome.html

Not so much a “tourist attraction” as a station on a religious pilgrimage that I expect the aspiring Basiji
pretty much HAS to enthusiastically throw themselves into.

“Wars are won in the will”, according to the old crone in “The Thirteenth Warrior”, and nobody has done more to encourage Iranians than Barracula.

Bet they figure out a way to get Obama to pay for the statue.

Like the Iranians will have to work overtime at that. Like Obama won’t be eager to pay as long as he can come up with a fig leaf of an excuse.

And He’ll send Kerry over for the unveiling/@[email protected] ceremony.

Kerry seems to enjoy it.

Maybe someone else who has operated in the Gulf can weigh in. Because, oh by the way, I have absolutely no clue how this happened.

I think I’ll end it there as otherwise I’d write a book. And yes I have some authority on the subject as at least I worked with small boats while in harbor defense.

How does this happen? So many things would have had to have failed.

Yes, I have not seen an explanation, either. What the heck happened? How did this occur? Why aren’t we being told or did I miss the memo?

The movement of a small boat from Kuwait to Bahrain is a planned evolution. Down to the gnat’s @$$.

It’s not like tossing your keys to the valet and saying, “park the Land Rover anywhere.”

It would be a statue to the epic failure that is iran. It is a country held hostage to a sorry excuse for a religion, run by hate filled mullahs who export destruction. The sad thing in all this, is not that the iranians will erect a stature but that our gov didn’t make them suffer any consequences of that capture.

Shared responsibility has a liberal interpretation with a progressive consequence.

They don’t need to bully or cajole Obama. He is their ally, and all Iran’s evil just find with him and his puppeteer, Valerie Jarrett.

John Paul “Don’t Give Up The Ship” Jones would be appalled at the American military of today.