Once again we’re reminded that the seizure of the American sailors two weeks ago was not some misunderstanding, it was a purposeful attack by Iran on the American navy. 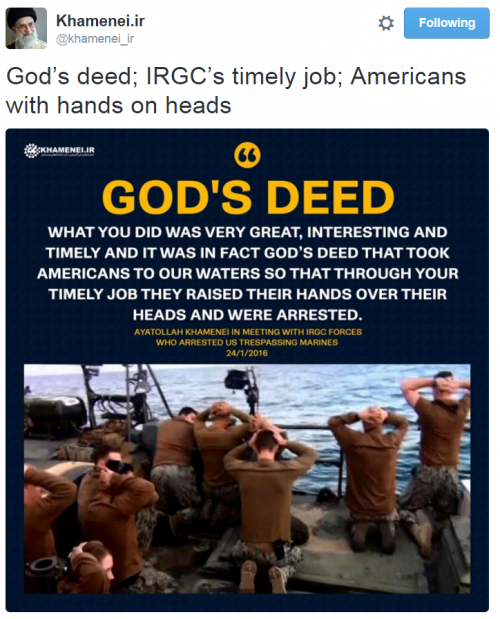 Khamenei’s comment was part of a a series of tweets praising Iran’s Islamic Revolutionary Guard Corps (IRGC) for seizing American naval vessels and taking their crews hostage two weeks ago. In one tweet he is seen congratulating the IRGC troops who captured the Americans.

Photos of meeting between Leader and IRGC forces who arrested US intruding marines.https://t.co/hEKxRmaxLp pic.twitter.com/etGej5L09H

This kinds of pokes a hole in Secretary of State John Kerry’s claim that the episode, in the context of the nuclear deal, shows the diplomatic gains made with Iran are paying off.

Our sailors, regrettably, inadvertently went into Iranian waters. The challenge is that three or four years ago, you mentioned, we wouldn’t have known who to call. We would have probably had to call the Swiss or maybe we would have called the British. There would have been no direct communication, and it could have grown into a major kind of hostage confrontation the way it had previously. And there were people, by the way, in Iran now who certainly would have argued to hold onto them longer. But it was because we built a relationship, because we are working at this nuclear effort, because we are trying to turn a corner, as President Rouhani said, and Iran has joined into the Syria talks and Iran agreed to a formula for a ceasefire, for a unity government, for a constitutional reform, and for an election in Syria. That could not have happened were we not building on this path with respect to the nuclear program.

If rapprochement with the United States was what was important to Iran’s Supreme Leader, that’s what he would have highlighted on his Twitter account. But it wasn’t. It was the humiliation of the United States.

It’s worth recalling how the seizure of the sailors was portrayed in the media. It was consistent with Kerry’s emphasis on the sailors’ release.

These are a sample of the headlines from two weeks ago.

They are all focused on the wrong story. The main story two weeks ago wasn’t about diplomacy or about the sailors’ release. The main story was about their capture by an increasingly aggressive Iranian regime that has little regard for international norms or international law. A related story was the way the administration, in the words of the headline to Eli Lake’s analysis, “[Thanked] Iran for Resolving the Crisis It Created.”

Lake wrote that there’s no arguing with the end of the story, “The sailors are freed and safe,” but:

Let’s start with the incident itself. Two small U.S. sea craft transiting between Kuwait and Bahrain strayed into Iranian territorial waters because of a mechanical failure, according to the U.S. side. This means the boats were in distress.

That is hardly unprecedented. International maritime law spells out the appropriate response — and in a situation like this, it does not give Iran the right to board these boats or detain the sailors, as the Iranian navy did. And yet Vice President Joe Biden on Wednesday morning described the incident at Farsi Island as “standard nautical practice.” On CBS, he said: “One of the boats had engine failure and drifted into Iranian waters. The Iranians picked up both boats, as we have picked up Iranian boats that needed to be rescued.” Biden added, “That is the way nations should do it.”

(It’s worth noting here that though a U.S. government source told the Associated Press initially that a mechanical failure was at fault for the incident, the Defense Department, according to The New York Times, then blamed it on a navigational error. The latest official report from CENTCOM is back to mechanical failure.)

It wasn’t just the arrest of the sailors that was likely in violation of international law, it was the broadcasting of the images of them surrendering on Iranian websites and and television which has prompted Rep. Mike Pompeo to demand an investigation into whether in doing so Iran violated the Third Geneva Convention. In 2007 the government of Tony Blair of Britain considered the broadcast of its sailors and marines captured by Iran to be a violation of the convention stating that “prisoners of war must at all times be protected, particularly against acts of violence or intimidation and against insults and public curiosity.”

Kerry congratulated himself on his top-notch diplomacy, “It is clear that today this kind of issue was able to be peacefully resolved and officially resolved, and that is a testament to the critical role that diplomacy plays in keeping our country safe, secure and strong.”

But the seizure of the sailors and their boats was a situation that shouldn’t have happened in the first place. Iran knew that the administration was desperate for a nuclear deal and would do anything to prevent the deal from being implemented. America’s diplomacy lately has been deployed to protect Iran, not further American interests. That is no way to keep America “safe, secure and strong.”

(Let me add here, as you might guess from the parenthetical observations above, I don’t believe that the boats strayed into Iranian territorial waters. Former naval intelligence officer J.E. Dyer explained why the story was not believable at first. Her latest, based on the CENTCOM report reflects the changes in what’s been reported, but still brings up serious credibility issues with what’s been reported.)

The sailors were not released, by the way, due to Kerry’s dazzling diplomacy, but as Dennis Ross pointed out in The Washington Post article reference above, “The Iranians had about $100 billion reasons why they might not want to be holding those sailors right now.” With the lifting of sanctions, the United States has no more leverage to exert on Iran.

In addition to the seizure of the sailors and their treatment there’s another part of the story that its mis-reported and that it is the “moderates” in Iran who prevailed here. Former Iranian President Akbar Rafsanjani, current President Hassan Rouhani and Foreign Minister Mohammad Javad Zarif are often described as “moderates” or “reformers.” They’re not. The reason they are so described is because they are competing against hardliners. But that reasoning is faulty. Different factions of hardliners can compete because they have different interests. Or as Lee Smith recently explained:

What is far more likely is that there is no such split between moderates and hardliners. The two camps—if there are indeed two camps—work in tandem. The hardliners take prisoners and the moderates negotiate the price of their release. Iran’s moderates are a ministry of bagmen sent out to collect on behalf of the hard men.

In short, the regime with which the White House has negotiated the future of American national security is still a regime that takes Americans hostage. Unless you believe that hijacking a U.S. Navy boat, humiliating its crew, photographing them with their hands above their heads, and broadcasting their apologies on state television is a demonstration of peaceful, moderate intentions.

In a similar vein Michael Rubin wrote a few days ago:

The White House and State Department might celebrate the release of American hostages, but in reality the release is less an epiphany on the part of Iran that hostage-taking is wrong than it is that hostage-taking is profitable. Not only does Iran effectively get $25 billion per hostage, but it also wins the release of seven Iranians imprisoned in the United States. Iranians who were detained not for the “crime” of being a newspaper reporter, as in the case of Jason Rezaian, or a Christian, as in the case of Saeed Abedini, but because they actively sought to smuggle sensitive technology in circumvention of sanctions and law.

Make no mistake: we negotiated with terrorists, and the terrorists won. There is no change of heart among the Islamic Republic leadership. Neither Supreme Leader Ali Khamenei nor his “Mr. Fix-It,” President Hassan Rouhani, have changed their tune and foresworn the behavior which led Iran to become an international pariah. Rather, what we see is a pragmatic desire in Tehran to profit and to imply moral equivalence between the American hostages held in Iran and those Iranians caught seeking to subvert the United States. The only question now is how long it will be before the next American is seized in Iran and whether, with the precedent set by Obama and Kerry, the United States will be able to afford the price.

(The answer to Rubin’s question has already been answered with the abduction of three American contractors in Iraq by Iran-backed Shiite militias according to Iraqi security officials.)

Keep in mind that whenever the administration or the media emphasizes how important diplomacy with Iran is, the diplomacy is not changing the regime. The price paid for the release of innocents from Iran only encourages more bad behavior. And the “moderates” just smile more, but work hand in hand with the hardliners. (And even if one believes that there are moderates in positions of power in Iran, the current power structure is ensuring that they stay on the margins.)

The dynamic at play in Iran’s relationship with the United States is not how diplomacy has resolved crises, but how appeasement of a lawless regime has bred even more crises.

Khamenei is wrong. Him receiving an American h3llfire missile enema would be ‘God’s Deed,’ but we would need an actual commander in chief who doesn’t roll over and show his &ss every time Islam makes demands.

With all the sarcasm I can muster, thank you Queen Barry and John F’ing Kerry.

I have a child in the Navy on a [ship] in [this region].
Every time I see that picture I feel nauseous.

It was not God’s deed, it was obama’s,and Kerry’s prearranged deal to humiliate the marines, the navy, and the USA. obama prevented the navy from stopping them and arranged for them to be in harms way. Then to add insult to injury the traitorous swine pass it off as a diplomatic victory.