Navy Officer Fired Amid Fallout from U. S. Sailors’ Arrest by Iran

Navy Officer Fired Amid Fallout from U. S. Sailors’ Arrest by Iran 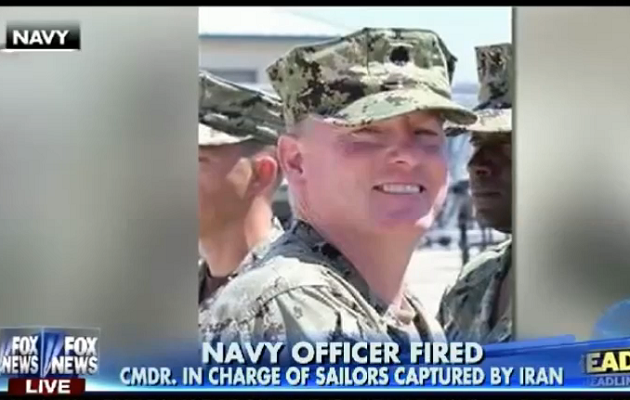 Back in January, Iran seized two U. S. Navy vessels and detained 10 of our sailors, and though they were released amid a flurry of genuflections and gushing gratitude from John Kerry, our sailors were purposefully and publicly humiliated by Iran.  Not only did they release photos, but they are going so far as to erect a statue to memorialize their “victory” over the United States.

The Navy announced that Commander Eric Rasch who was the executive officer of the riverine squadron has been fired as a result of the Navy’s “lack of confidence in his ability to command.”

The head of a riverine squadron at the center of an international incident in January was fired Thursday, the first officer to be publicly disciplined for errors that led to 10 sailors being captured by Iran after getting lost in the Persian Gulf — a debacle that nearly scuttled the U.S.-Iran nuclear deal at the 11th hour.

Cmdr. Eric Rasch, who at the time of the Jan. 12 incident was the executive officer of the Coastal Riverine Squadron 3, was removed from his job by Capt. Gary Leigh, head of Coastal Riverine Group 1, for what a Navy Expeditionary Combat Command release said was “a loss of confidence” in his ability to remain in command.

It appears that Rasch’s firing may be only the first of the Navy’s disciplinary actions related to the January debacle.

Cmdr. Gregory Meyer, who was commanding officer at the time of the incident, is currently with Coastal Riverine Group 1, and has been put on “administrative hold,” meaning the Navy will not transfer him out of the unit, while a high-level review of the Navy’s investigation into the incident continues, said two officials familiar with internal deliberations.

The move is the first in what sources expect to be a series of disciplinary measures for what was a high-profile embarrassment for the U.S. Navy.

The Washington Times has more details:

A Navy official says the Navy lost confidence in Commander Eric Rasch, who was the executive officer of the squadron that included the 10 sailors at the time of the Iran incident. He was responsible for the training and readiness of the 400-plus sailors in the unit.

The official says Rasch failed to provide effective leadership, leading to a lack of oversight, complacency and failure to maintain standards in the unit. Rasch has been relieved of his command duties and reassigned.

The official was not authorized to discuss the details publicly so spoke on condition of anonymity.

The chain of accountability goes straight to the White House.

But alas, the blame always stops mid-level once a suitable scapegoat is found.

The Iranians probably spoofed the American’s GPS locators so they thought they were somewhere else. But, someone has to pay. And it is not hard to imagine the men have lost confidence in this officer.

I am reminded of the old fitness report that said “enlisted would only follow this officer through sheer curiosity.”

They didn’t need GPS. All they had to do was keep the coast on the starboard side of the boats in sight and they would have been successful. There has always been something fishy about this whole incident.

Agree 100% and have thought so since the outset of the fiasco.

Blame is easy to assign, but hard to ascribe.

I wasn’t there but I was taught in the USMC to resist any and all attempts at humiliation and any show of cowardice before the enemy. Of course, torture would rule that out depending on the degree. What these sailors did was an embarrassment to themselves, their service and their country. But then look at the Army going after a Ranger who intervened against an Iraqi police commander who was raping a small boy repeatedly. The boy’s mother asked for help and got it from this fine man. But the Army decided to give him a dishonorable discharge. After many thousands of letters and e-mails the DoD decided that maybe they were wrong and rescinded the discharge order although his career is now ruined. This is what obama has done to our military. He has thrown the warriors out and placed bureaucratic yes-men in their places.

My son is an E6 MP. He has horror stories to tell about what is going on in the Army these days. He says they are soft and getting worse since he first joined. Political Correctness and Sensitivity, thanks to the Progressives, is evidently winning the day.

Same here, I was with the 1st Ranger Bat. in the early 90’s and up until the past couple of years still had many friends in different branches of the service that I had worked with as a part of my time in the Army. Now maybe a half dozen or so of them are still in the military and all of those are just hanging on for retirement purposes at this point and we are talking about guys that made a career out of the service who want nothing more than to just be out now, because it is not he same Army anymore. One told me that the term ‘Professional Fighting Force’ no longer applies.

As for the XO who was fired, the Captain will be next they have chosen their scapegoats.

There was getting in the way of getting captured, getting captured, and looking bad while captured. Three different items.
There is always something that’s against regs that everybody does because it works. If you didn’t do it, you wouldn’t do well,or as well, or even succeed, given the parameters. Then, one day, it doesn’t work. That guy gets the chop. That it was, as a matter of practicality, required prior to that, even though skirting the regs, is irrelevant.
That would be a question as to the first item. Was he taking an unauthorized short cut that everybody else took with no trouble?
Resist? Commo to support? Destroyer someplace? Couple of Sea Cobras on short alert? No? That’s somebody needs hanging.
Behavior after capture? Not in a position to cast blame, although I could wish it had gone differently.