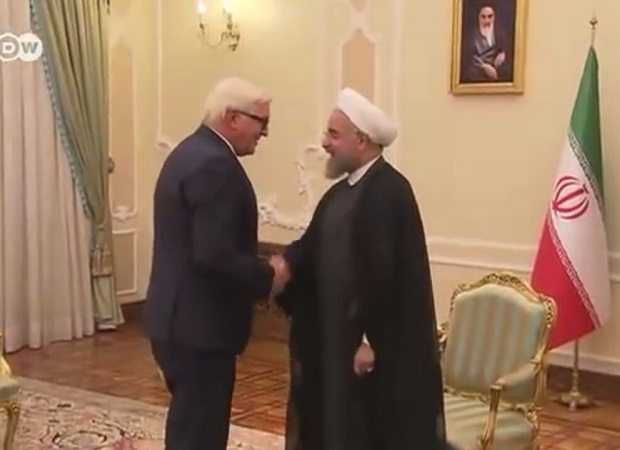 Iran has been making repeated attempts to acquire nuclear-, chemical- and biological weapons technology from Germany, reveals the annual domestic intelligence report published by the German State of North Rhine-Westphalia (NRW) last week. According to the report, last year Iran made 141 attempts to illegally secure technologies related to [nuclear, chemical, biological] proliferation in the state of NRW alone. This indicates an almost 100 percent rise compared to 83 such attempts in 2014.

If this intelligence report is to be believed, than German government was aware of Iran’s continued efforts to acquire Nuclear and WMD technologies while it was pushing for a Nuclear Deal with Tehran 0n the world stage. Chancellor Merkel’s Government enthusiastically backed Obama-sponsored Nuclear Deal and was one of the six countries that worked out a nuclear agreement with Iran last year.

The leading German newspaper Süddeutsche Zeitung proudly noted after the conclusion of the Iran Deal last year, “Germans many not have been at the centre of the talks, but as go-betweens for Iran, they were considerably important. Amongst all parties working to bring about a negotiated deal, Germans enjoyed [Tehran’s] special trust.” [Author’s translation]

This however begs the question; did German intelligence agencies failed to communicate to their government the extent of Iran’s WMD-related activities inside their country while top German diplomats sat negotiating the Iran Deal, or where these security concerns brushed aside in the hopes of securing lucrative business deals tied to a successful Iran Nuclear Deal?

Eminent counter-terrorism expert and Fellow at the Foundation for Defense of Democracies, Benjamin Weinthal wrote in Jerusalem Post:

Germany’s Federal domestic intelligence agency said in its newest report in late June that Iran’s “illegal proliferation-sensitive procurement activities in Germany registered by the Federal Office for the Protection of the Constitution persisted in 2015 at what is, even by international standards, a quantitatively high level. This holds true in particular with regard to items which can be used in the field of nuclear technology.”

The agency said there was “a further increase in the already considerable procurement efforts in connection with Iran’s ambitious missile technology program, which could, among other things, potentially serve to deliver nuclear weapons. Against this backdrop, it is safe to expect that Iran will continue its intensive procurement activities in Germany using clandestine methods to achieve its objectives.”

Both German media and big businesses have been unequivocal in their support for the Nuclear Deal that promised big rewards in return for Germany’s favourable attitude towards Iran. In April 2015, Bavarian Chamber of Commerce (BIHK) noted in its official communique that “German media landscape agrees on one point: lucrative deals worth billions are waiting to be made in Iran. As soon as the sanction are lifted, the run on the markets begins.”

According to German media reports, Iranian President Hassan Rouhani is expected to visit Germany later in this month. The high-level visit in Berlin is expected to boost German-Iranian bilateral trade relations. Germany’s Vice-Chancellor Sigmar Gabriel and Foreign Minister Frank-Walter Steinmeier have already visited Tehran since the conclusion of the Iran Deal.

Apart from investing tens of billions of Euros in Iranian oil fields, Germany hopes to secure its position as the leading supplier to Iran’s manufacturing sectors — elbowing out the established Chinese and Korean suppliers in the Iranian market. European aircraft-maker Airbus, in which Germany holds a controlling stake, just secured a $27 billion contract to supply 118 planes to Iran.

These and other trade deals worth billions of Euros could explain Germany’s unwillingness to get tough on its new trading partner. It could also explain way Germany has failed to act against estimated 1,000 known members of Iran-backed terrorist group Hezbollah operating freely in the country.

Alarmingly, the intelligence report also identifies Pakistan as another rogue state shopping for WMD technologies in Germany. In 2015, The state of North Rhine-Westphalia uncovered 49 such attempts by the Islamic Republic of Pakistan. The real extent of recent Iranian clandestine moves to secure nuclear and other WMD technologies in Germany could be much higher, as several German states are yet to release their annual intelligence report.

With terrorist rogue states like Iran and Pakistan shoplifting their way to more deadlier nuclear, chemical and biological WMDs in Germany, only raises the stakes in the ongoing global Islamic Jihad that threatens to engulf the entire civilised world. Perhaps the leaders in Berlin would be well-advised to wake up to these facts before it is too late.

NATO’s 28-member bloc has agreed to station four battalions of as many as 1,000 soldiers each (the United States, Germany, Canada and the United Kingdom will each lead a battalion) in Poland, Latvia, Lithuania and Estonia on a rotational basis starting in 2017.

…so, while the U.S. and Germany “stage” a military show of force at Europe’s eastern flank portraying deterrent strength to Russia, Iranian weaponization has been effectively left undeterred and even indirectly promoted by Obama lawlessly looking the other way and Germany lusting for new markets and new Capital.

NATO has been stationed to provide safe passage to an invasion and defend the subversion of their homeland from within.

Merkel seems to pray for “death by Islam”. Hitler must be rolling in his bunker.