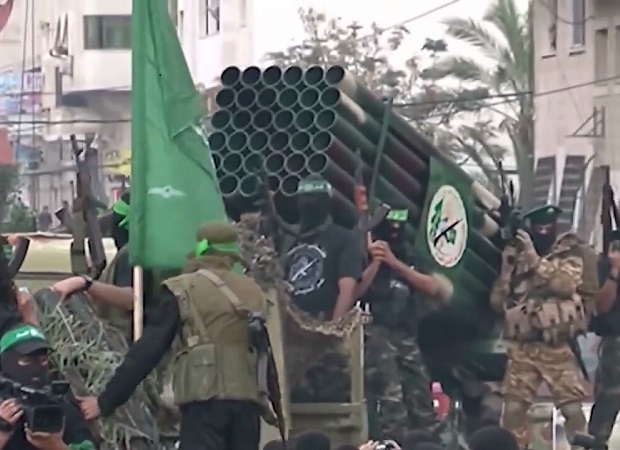 According to a latest intelligence report, Germany harbours an alarmingly large number of Islamic terror operatives on its soil. Germany is home to about 300 Hamas and 950 Hezbollah members, the annual report of Germany’s domestic intelligence agency — the Federal Office for the Protection of the Constitution (BfV) — reveals. The report was released last week by German interior Minister Thomas de Maizière and President of BfV, Hans-Georg Maassen.

“The supporters of Islamist-terrorist groups like Hamas and Hezbollah, who aim is to destroy the Jewish State of Israel, are focused on their region of origin [Middle East] and primarily conduct acts of terrorist violence there [Authors translation],” says the 317-page long annual intelligence report.

What is surprising is not the high number of Hamas, Hezbollah or other Islamist groups operating in Germany — intelligence reports have been confirming that fact for some years now — but rather the inability and the unwillingness of the Germany authorities to clamp down on their activities.

Iran-sponsored terrorist group Hezbollah has made no effort to hide its presence in Germany. According to Jerusalem Post, “An estimated 800 pro-Hezbollah activists and Iranian regime supporters marched in the annual al-Quds Day march in Berlin on Saturday.”

Noted counter-terrorism expert and Fellow at the Foundation for Defense of Democracies, Benjamin Weinthal writes in Jerusalem Post:

It is unclear why Germany is harboring Hamas members.

The EU classifies Hamas’s entire organization as a terrorist entity. (…)

According to [Federal Office for the Protection of the Constitution’s] reports in 2013 and 2014, the number of members and supporters of Hamas and Hezbollah remained 300 and 950, respectively.

The 2015 reports said 360 members and supporters of the group Turkish Hezbollah are active in Germany.

Such statistics can be hard to square with the administration of German Chancellor Angela Merkel, who declared in 2008 Israel’s security to be “non-negotiable” for the Federal Republic. Israel and Germany wrapped up a packed year of events in 2015 celebrating 50 years of diplomatic relations.

In 2014, Germany banned a ‘charity’ raising funds for the Iran-backed terrorist group Hezbollah. However, Hezbollah’s continues to raise funds and operate in Germany and Europe behind the façade of its ‘political wing’. Hezbollah has also been using Europe as a base for its money laundering operation and drugs trade.

The German intelligence report did not give any details on the number of Islamic State and Al-Qaeda operatives in Germany, but estimated 8,350 Salafists (radical Islamists) and more than 1,000 Muslim Brotherhood members were known to be operating in country, according to this year’s figures.

Till December 2015, around 800 German nationals had travelled to Syria and Iraq with intent to join the Islamic State. Estimated 20 percent of these ISIS aspirants where women. About a third of these ISIS combatants have returned back to Germany, many of them battle hardened and with terrorist training.

Equally disturbing is the extent of the Jihadist infiltration of the German army, Bundeswehr. Up to 29 former Bundeswehr soldiers are among those who have joined the ranks of Islamic State. As many as 320 active duty soldiers of the German army have been under investigation for having Islamic terrorist links.

Despite all the happy talk and the positive spin given by the German media and the government about the migrant influx, the intelligence report once again confirms a freighting reality that “in light of continuing migration to Germany, it is to be assumed that also active and former members, supporters and sympathisers of terrorist groups … (such a Islamic State) as well as individuals with extremist inclinations and/or Islamist-motivated war criminals could be among the refugees [Author’s translation].”

Just because groups like Hamas and Hezbollah are primarily targeting Israel, should not be a source of relief to the German and European security agencies. Terrorist outfits consolidation their foothold in the heart of Europe should be a matter to them as well. As the recent wave of terror attacks in Turkey have shown; sooner or later Islamic terrorists turn of the host country as well.

Does Germany do anything besides monitor and report? If not, why? Banning the raising of funds is pathetically weak.

Western countries seem to simply just monitor the progress of the fire as they watch their houses burn to the ground. Yep! Looks pretty bad. Let’s check again later. UFB.