What I saw at the San Diego Clinton Rally Today

What I saw at the San Diego Clinton Rally Today

Bill Clinton: “We’ve got to run this race to the end.” 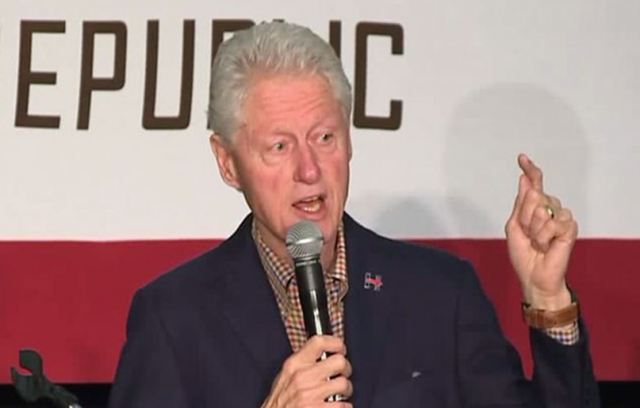 In the wake of Bernie Sanders’ shock win in Indiana, and now substantially narrowed GOP field, the center of the Democratic Party’s political universe is now California.

Since there is currently a mere two point poll gap between Bernie Sanders and Hillary Clinton, every vote in this state is critical. So, both Clintons will be in California for various events over the next few weeks.

Yesterday, I read that the former President would be in San Diego’s Balboa Park Club for a speech. So I donned by Star Wars t-shirt (May the Fourth be with you) and attempted to blend in with Clinton fans for a on-scene report.

The Balboa Park Club is not a large venue (normally, it has a 500 person capacity). I found parking easily, and made it in time to be about the last a line of what is reported to be 850 attendees (Note: This is less than half of the attendance for the Ted Cruz and Bernie Sanders rallies).

While Hillary Clinton supporters were signing in (i.e., giving the campaign contact information), a group of Bernie Sanders supporters were there to entertain them with signs and songs.

Here are the signs: 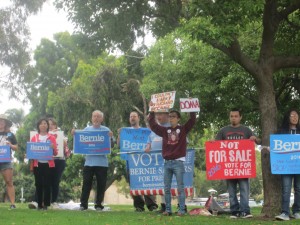 My camera doesn’t have great video, so here is the song…which apparently is popular with Sanders supporters.

I will note that there were no Mexican flags visible anywhere.

A few joyous Trump supporters were on hand to wave to the crowd as well. 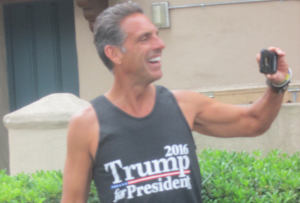 The doors were open at 9:00 am, and the event was slated to go until 11 am. I was a little surprised that the local Democrats had not arranged a few speakers for the first hour, because the most thrilling moment during the first 60 minutes was a sound check. File this under wasted opportunity.

As I waited for the speech, I noticed that a favored Clinton rally tactic had been used: Herding attendees so that it appears that the crowd is larger than it is. That 500 capacity room was about 2/3rds full at 9:30 am, when I took this shot: 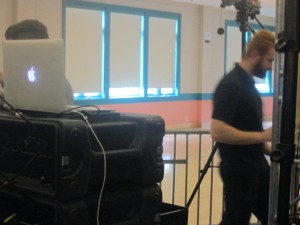 I used the time to talk to a few likely Hillary Clinton voters. One enthusiastic young woman cited Clinton Foundation successes in New York as the basis for her support. I overheard many Trump jokes as well.

Shortly after 10 am, the introductory speaker made his way to the stage. Bill York, founder of the San Diego Veterans Coalition, was there to show the Clintons’ bone fides, in terms of supporting the military.

Then the former President took the stage. Some reports covering previous events described him as hoarse or ill-looking. Whether the results in Indiana lit a fire in his belly, or he recovered from an illness, Clinton was engaging and entertaining as he offered a laundry list of reasons why his wife should be elected president.

Clinton spoke for the full 45 minutes, and to his credit there was little Trump-mocking. Much of the speech covered his successes (including his support of the Human Genome Project, designed to appeal to an important biotech area).

However, his remarks clearly indicate the direction the campaign will take to claim the Oval Office. Some highlights:

Compared to the Cruz rally I attended, the applause was tepid… except when someone suggested Bill Clinton should run again.  That was the single, biggest response I heard during the entire event.

There were only two interruptions. Before the speeches, some Sanders supporters got into the venue and started chanting.  That did not last long.  Then there was one young man that was yelling “tax the rich” at various points during Clinton’s presentation…as if that were the sole solution to all the country’s problems.

Bill Clinton noted how important the California results will be in the campaign narrative: “We’ve got to run this race to the end.”

I suspect that Team Clinton did not anticipate to be running this race all the way to the Golden State.

Thanks for the eye-witness report.

Thanks! The things I do for Legal Insurrection….:D

I saw elsewhere a suggestion that Republicans in California change their voter registration to No Party Preference so they could vote in the Democrat primary.

I’m just afraid that casting a ballot for either Sanders or Clinton, even in their primary, would cause me to burst into flames.

I asked someone to take me down to the registrar’s office so I could change my registration and cast a ballot for Bernie Sanders in the California primary.

Video of the trip:

I’ve been there; I once registered Deemocrat to vote in a primary. It was a non-fun experience I will not repeat.

“We’ve got to run this race to the end.”

Interesting. I usually hear that phrase used by people who believe that they’re losing.

We can certainly HOPE…

i jut sent in my confirmation forms, changing my affiliation to NPP, so i can vote for Bernie in June.

other conservatives here in #Failifornia should too

Well it certainly sounds like a civilized rally, no major disruptions or physical confrontations or vile personal attacks – the kind of environment you’d expect at old time Republican events.

I lived in CA all my life until a couple years ago. Bernie should do well there.

The phrases “shared prosperity” and “inclusive society” will be heard frequently.

Hey, Hillary! How about sharing some of your prosperity. I could sure use a nice new truck. It’d only take about 10% of what you get for one speech.

I would have been tempted amongst other things to yell in response to the guy yelling “tax the rich” with “Yeah, let’s start with taxing that rich b**ch!” while pointing at the stage.

Leslie :
Didn’t you do a report some years ago of a lefty group who trashed a garden exhibit or some such at Balboa park?

Yes..I do believe so.

My unofficial, unscientific poll of bumper stickers in and around San Diego put Sanders WAY ahead of Clinton.

One REAL reason why Bubba thinks Shrillary Shrooo should be POTUS: this time, we’ll SUCCEED in stealing the White House China!