What I saw at San Diego’s Ted Cruz Rally

What I saw at San Diego’s Ted Cruz Rally

Light on drama, heavy on message. 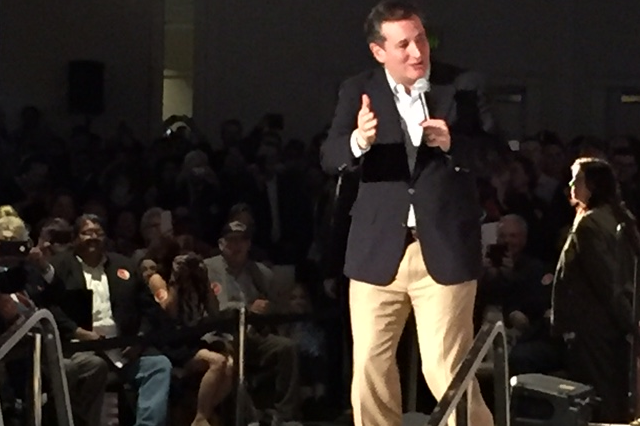 Californians are thrilled at the prospect of having their votes actually matter during the presidential primary season, especially when every delegate is critical.

So many Republicans in the southern California area headed to various rallies yesterday to see aspirant Senator Ted Cruz. I joined two of our local Tea Party bloggers (W.C. Varones and Left Coast Rebel) and 2000 other interested voters at his San Diego event yesterday.

Both of my Tea Party compatriots are unhappy with the thought of Donald Trump’s nomination. However, they had reservations about the Cruz style of speaking, and whether he could put a “human touch” on his policy proposals. Both were pleasantly surprised by the Texas Senator’s speech, rich in humor and insights on his platform of “Jobs, Freedom, Security.”

I must admit, my favorite portion of the speech was when he talked about dismantling the Environmental Protection Agency. However, the proposal to go to a flat tax and jettison the Internal Revenue Service was a very close second.

Having the quintessential Tea Party presidential candidate shutter the IRS would be a dream-come-true.

However, Cruz still needs to win the Republican nomination. To do so, he is going to have to face a gauntlet of Trump supporters. About two dozen protesters, a blend of Trumpsters and the usual progressive suspects, were stationed in front of the Town and Country Conference Center, expressing their disdain. 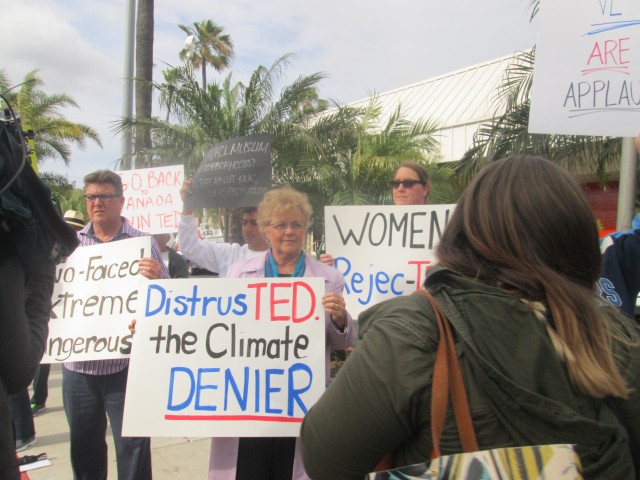 I was curious to see if the Craigslist hire-a-mob gang would show up, or of there would be any #BlackLivesMatter drama. There was an interruption about half-way through Cruz’ address, but I couldn’t determine which set of nuts had been unleashed. Someone who had a vantage point had this to report:

[Cruz] didn’t hear what was shouted, but the 45-year-old Tea Party favorite responded to the crowd’s drown-out chants of “Ted Cruz, Ted Cruz” by saying: “Apparently there’s a Bernie Sanders rally outside. By the way, you know the easiest way to clear out a Bernie Sanders rally? Just tell them they’ve gotta get a job.”

Vanessa Murguiax, working for I Heart Radio and a Carl DeMaio KOGO show, said she and a colleague saw a group of one man and four women yelling “Undocumented, undocumented” before leaving of their own accord.

Talking to the participants prior to the speech, several of the attendees were undecided between Trump and Cruz. I chatted with a couple in line, and the husband said he came to “get the measure of the man.” While he was impressed with Trump’s leadership skills and willingness to battle race-baiters, he wasn’t sure about the depth of his conservatism.

The wife had nothing but contempt for the Trump style, calling him “rude.”

I also talked with an avid Cruz supporter, Rebecca. She has been a fan of the Senator since the start of his campaign.

“What impresses me about Cruz the most is how he has acted as Senator,” she explained. “There were many who came in as Tea Party, but they fell away, one-by-one. Cruz has been the most consistent, the most willing to directly challenge the establishment. I feel that I know who I am voting for, and that he is a great strategist who can figure out how to get what needs to be done actually done.”

In fact, the Cruz strategy of working on the delegate counts and developing robust state organizations shows that long-term planning and strategic thinking.

At this point, Cruz as well as many parts of the GOP establishment aren’t trying so much to clinch Cruz the nominee as deny it to Trump.

If they’re successful, in most cases after the first round of voting at the convention Trump’s pledged supporters can change their vote to other candidates. Cruz has been working the states to find delegates who, if they must go for Trump at the outset, will back him in subsequent convention votes.

The crowd who listened to the speech was very diverse, in terms of age and ethnicity. Once fascinating moment came when I observed members of the local press try to interview every non-white person in line, skipping over those who didn’t meet their racial template.

Yes, the press has a gift of making everything about race, which has been honed to perfection during the nearly eight years of Obama’s “Reign of Error.”

The success of Cruz in connecting with people during the rally was shown by observing the young son of one of my fellow bloggers. He listened intently during the entire address, and was clearly excited that dad was going to vote for Cruz after.

Out of the mouth of babes!

Good field report. It’s heartening to see that one GOP candidate understands the process and has a team in place to get things done.

What’s amazing about Cruz is that he’s truly the outsider GOP voters claimed to crave in the run up to the election cycle. Yet so many sought out Trump instead.

Trump satisfies an emotional need for revenge that Cruz doesn’t. Cruz isn’t about punishing “enemies” so much as fixing problems. For people who have become cynical and hopeless, they can’t imagine that Cruz actually means what he says.

I can’t project this on all Trump supporters, but over about 3 months I’ve spoken to a couple that chose him over the others (more than two at that time) because they believe he is the least likely to succumb to Washington-itis. And they think Trump’s harshness and unwillingness to be a “traditional candidate” are part of the evidence. It’s more than just giving the finger to the corrupt system maintainers. He’s his own man and his campaign mistakes only make them feel more confident he doesn’t give a rat’s behind about “the way politicians have always done it”.

Both thought Cruz had some great ideas. But they pointed to his position changes within the campaign timeframe as evidenc3 he already has the disease.

“But they pointed to his position changes within the campaign timeframe as evidenc3 he already has the disease.”

I agree. Trump does have the disease. Just look at all of his position changes. Maybe one day the Trump supporters will wake up and hold him to the same standard they try to hold everyone else.

He even got through the protesters’ disruption without having them beat up by a goon squad, impressive!

Not that Trump is capable of learning, or he would have ditched the orange pancake makeup years ago.

So I guess Jan Brewer’s endorsement wore off?

Nope. I will happily pull the lever for either Cruz or Trump! 😀

Awesome read, thanks for sharing the experience!

I was able to see him locally about a month ago now myself, and it was great. What stuck me was, like you said, the variety of people in attendance – he truly has been able to unite much of the people the Establishment insists he flat out cant.

And to this
About two dozen protesters, a blend of Trumpsters and the usual progressive suspects, were stationed in front of the Town and Country Conference Center, expressing their disdain.
…isnt it pitiful that the TrumpCult is literally becoming the BLM of the Right, despite claiming they somehow hate such tactics and whining? I mean seriously, why not just get it over wit and make up their “TrumpsFeelingsMatter!” banners.

I thought this was about Cruz not “karate chop Kasich”
(his dad was a mailman dontcha know.)

While funny (esp the Mailman nod), Scott may have been referring to Trump with the “slap chop” line. (Ive seen someone else use that term about Trump, although I will admit I have no idea what it is in reference to) It is what lines up with the “nothing particularly conservative” portion of his post, and the candidates supporters I made mention of

Could be wrong, but I believe thats how to take his post

Donald Trump is exactly a third-rate infomercial salesman. I peg him behind Billy Mays and Vince, the Slap Chop and Sham Wow guy.

“Sham Wow” seems a little on the nose for Donald, so… Slap Chop

Got it, and makes sense!

Glad to see Cruz doing well ….
I have seen reports that Trump started this
as a self promotion (something he does really well)
and as a protest movement and it took off.

I love this report, Leslie! Thank you so much for sharing it.

I am so glad, too, that people are starting to see how likable Cruz truly is. He’s not only incredibly intelligent and articulate, but he has a great sense of humor. He’s at ease speaking to and meeting with people, and he’s incredibly approachable and genuine.

Not only that, but Cruz is a strong, reliable conservative straight to his very core. That’s one of the things the GOPe can’t stand about him, btw.

I’ve done a couple of posts that have shared his speeches or his Christmas ad, and it always warms my heart when commenters say they hadn’t realized he had a sense of humor, etc.

Should he win the nomination, more and more people will hear him and watch him and come to the conclusion that he’s not some sort of boogie man hiding under the bed but is a genuine, intelligent, articulate, and strong conservative.

He has a lot of the qualities I’d like to see in our President, again. Hillary only has one.

No, wait. Actually, she doesn’t have any redeeming qualities. Zero. Zip. Zilch. Nada.

I saw all, except for Carson and Trump, of the Republican candidates in Atlanta at Red State and of the ones there Cruz was not only the best speaker but the one that actually has stayed on his message and has not waivered. He showed good humor but told us in less than 15-20 minutes what he stood for and what he was going to get done. I am sorry that the Trump – Cruz crowd has become so divisive but when one candidate offers solutions and one offers insults then the decision becomes easier.

Is Ted for real or will it be more of “meet the new boss same as the old boss”?
Why can’t America and Americans come first?
Trump might be a clown, amateur, and a fraud but at least he’s not so cowardly that he can’t name the problem.
Not saying Ted’s a coward. Just haven’t heard him call for a moratorium on muslim immigrants or to seal the border or to stop propping up a failed state known as Mexico. How about trade policies that benefit America?