Democratic Party race is still very much on! 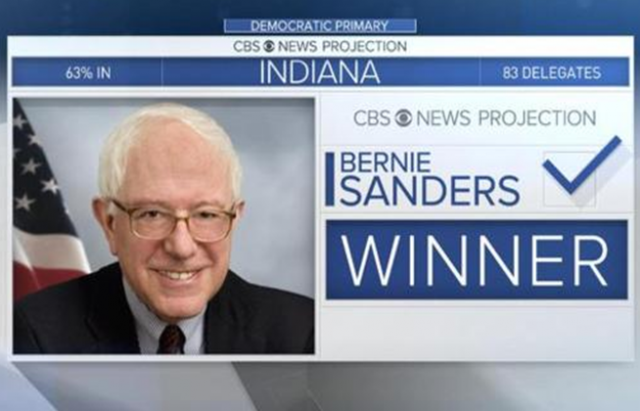 When the primary season started, there were 18 Republican candidates and 3 Democratic hopefuls.

In a twist of irony of roller-coaster-sized proportions, the Republicans have their presumptive nominee while the Democrats are still engaging in an intense ballot battle.

The fight for the nomination continues with Senator Bernie Sanders’ upset win in Indiana.

Bernie Sanders triumphed over Hillary Clinton in Indiana’s open primary Tuesday, boosting the grassroots candidate’s argument that the party’s superdelegates should flip their support to him in July’s Democratic convention.

Sanders spoke to thousands of supporters in Louisville, Ky., before Indiana’s results were in. He called for an end to closed primaries and criticized Clinton for her ties to Wall Street and paid speeches to Goldman Sachs — a sign the heated rhetoric on the Democratic side shows no signs of cooling down.

This win is critical, because Hillary cannot quite create the narrative that Donald Trump now can about being the likely nominee. That is, unless she relies on those superdelegates.

But doing so is not enhancing her popularity among Sanders supporters.

Find superdelegates from your state and let them know why Bernie should be the nominee! #FeelTheBern #BernieOrBust https://t.co/7TqGwryb6Y

Superdelegates, wake up to the future! Come on and #FeelTheBern https://t.co/BQd826jOCD

Attn All SuperDelegates: We Are #BernieStrong & We Pledge To Vote Out Those Who Are Not With Us #FeelTheBern pic.twitter.com/TWwmMjGEfb

Political analyst Nate Silvers sympathizes about how unfair the superdelegate system is, and offers those who #FeelTheBern a little hope:

Superdelegates were created in part to give Democratic party elites the opportunity to put their finger on the scale and prevent nominations like those of George McGovern in 1972 or Jimmy Carter in 1976, which displeased party insiders.

Here’s the consolation, however. Unlike elected delegates, superdelegates are unbound to any candidate even on the first ballot. They can switch whenever they like, and some of them probably will switch to Sanders if he extends his winning streak into more diverse states and eventually appears to have more of a mandate than Clinton among Democratic voters.

Sanders may capture a couple of more primary wins in Oregon (where he enjoys a large margin in the polls) and West Virginia (where Clinton’s statements about coal mines have hurt her chances).

Significant momentum for the Vermont Senator could be gained if he takes California in the June 7th primary. Unfortunately, Bernie Fever does not seem to have reached the Golden State…yet. He has just narrowed the margin to 2 points:

Hillary Clinton’s lead over rival Bernie Sanders in California has shrunk to two points, bringing to a screeching halt any momentum she hoped to gain from her 16-point win in New York.

The Fox poll out Friday night showed Sanders surging in the Golden State, where two earlier April polls had him 6 and 12 points behind.

Finally, Sanders’ Indiana win means Clinton can not entirely focus her attacks on Trump, because she has to watch her left flank. The struggle in the Democratic Party could provide some useful weapons for Trump during November’s epic battle.

“He’s been tough on her,” Mr. Trump said. “In fact, I’d like him to keep going, because the longer he goes, the more I’m going to like it.”

“What he’s saying about her … he said she suffers from bad judgment,” Mr. Trump said. “Now, I don’t know. I think she’s qualified, I guess, but that doesn’t mean she’s good.”

Honestly, who would have thought the more exciting ride would have been on the left this primary season?

He’s not actually a member of the Dem Party? Surreal. I knew their bench was shallow …

So what happened to the wide Republican bench, touted here and elsewhere as the deepest roster of Republican competence ever?

Empty now but for Trump and invisible Kasich.

“Going to the candidates debate
Laugh about it, shout about it
When you’ve got to choose
Ev’ry way you look at it, you lose…

Vote for the Socialist. It’s important.

Seriously, if we wind up with a Trump vs. Bernie election, both major political parties will have to take a long look at their values.

They’ll keep doing what they’ve been doing before, but at least they’ll look. Heck, maybe they’ll find some.

Man, without those super delegates… Well, when Hillary finals gets over their magic number, what are Bernie supporters going to do? If they feel cheated or disenfranchised they won’t come out in droves for Hillary. Last night proved that, there were twice as many Democrat voters in 2008 than there were in 2016. The excitement just isn’t there (twice as many Republican votes than Democrat votes this year though).

There is only one Donald, and will only be one Donald. He’s bringing an interesting level of excitement to the table. That being said, Bernie is also exciting the base, but it is the base that is on the far left. Hillary excites no one (sorry Bill).

If people aren’t invested in who wins this election at all and are willing to stand back and take a look at what has happened, this has been one heck of a fascinating year.

So two upstart candidates might infiltrate the major parties and become the nominees?

The polling has had Sanders beating everyone badly.

This would be fun to watch if it weren’t real life.

I am planning on voting for Barney the Communist in the primary. At least he appears to have some integrity which makes him a thousand times better than the Hildabeast.

Had this primary season been fiction, no one would have believed it – too unreal.

A lifelong Socialist is gaining traction in the Democratic party and a lifelong Democrat has taken the Republican party. Our nation is going down the porcelain facilities.

Both parties have been defining themselves with social issues for a long time and the hell with the budget and the economy. As I recall my youth, I remember having a job and supporting my family was the top issue with me. Now that most blue collar jobs have been regulated to death, it’s time for a big change in Washington. politicians have been getting rich squandering our money for too long.

Male Vanity Hairdooooooooo
Versus Shrillary Shrooooooooo–
What is this country coming tooooooo?