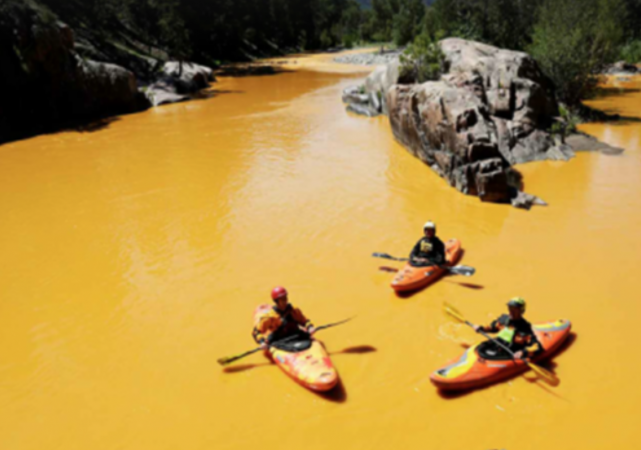 The last time we checked the regulatory runoff from the Animas River spill, a 132-page report by the Interior Department and Bureau of Reclamation laid the blame for the contamination at the doorstep of the Environmental Protection Agency.

Now, the legal runoff is about to hit.

New Mexico is seeking more than $136 million from the Environmental Protection Agency and the owners of Colorado’s Gold King Mine, noting that dangers from contaminants spewed into the Animas River by the Aug. 5 mine spill are still lurking in New Mexico waters.

In a lawsuit filed Monday in federal court, Attorney General Hector Balderas and the New Mexico Environment Department cite economic setbacks and environmental damage suffered by the state after more than 3 million gallons of toxic waste was dumped into the river.

It demands reimbursement of $889,327 for short-term emergency-response costs paid by the state, more than $6 million to pay for long-term monitoring of the Animas and San Juan rivers and $130 million for lost income, taxes, fees and revenues suffered by the state because of the spill.

New Mexico isn’t the only entity planning to slam America’s most aggressive agency with a lawsuit, either.

The Navajo Nation also said after the spill they are readying a lawsuit against the federal government.

And Utah also has a lawsuit in the works.

Two U.S. Senators have introduced legislation [Gold King Accountability and Compensation for Taxpayers (ACT)] requiring the EPA to “fully and expeditiously” compensate all communities impacted by the Gold King Mine spill. The bill, offered by Cory Gardner (R-CO) and Orrin Hatch (R-UT), was created after reports surfaced that La Plata County (where the spill originated) will not receive full reimbursement for the costs for dealing with the disaster.

Currently, there are more than 60 federal tort claims relating to the Gold King Mine spill totaling nearly $5 million that the EPA has not yet paid. The Gold King ACT holds the EPA fully accountable by requiring the EPA to pay for these claims out of its own budget. Additionally, the legislation expedites the payout of emergency response costs assumed by tribes, counties, and local governments.

Additionally, two other U.S. Senators are asking the Justice Department to launch a criminal investigation into the Gold King Mine spill.

“We believe that sufficient information exists to warrant an investigation by the Justice Department of whether EPA employees or contractors may have committed crimes in connection with the spill, including but not limited to criminal violations of federal environmental laws, criminal negligence and obstruction,” the senators wrote.

It will be interesting to see if the EPA officials take these investigations more seriously than bureaucrats in the IRS or State Department are treating checks into their dubious activities.

They should mandate that assessed penalties be paid from current budget allocations; that the EPA (or other offending agencies) do not get to soak the taxpayers for their crimes. Further, Congress should be deaf to requests for increases in future allocations that stem in any way from assessed penalties.

Make the agencies figure out how to get by with less – the same as we peasants have to do it.

((dream on, he says silently to himself))

They should mandate that assessed penalties be paid from current budget allocations; that the EPA (or other offending agencies) do not get to soak the taxpayers for their crimes eliminate the EPA.

I like the trust of your idea, but it still leaves US paying for agency screw-ups.

Here’s a notion for kicking around…

UNTIL we can kill or greatly reduce the Agency State, every mid-level and above bureaucrat should be required to post a multi-million-dollar bond, paid for out of their own pocket, and rated by the bonding company.

Take it out of the pensions of the EPA brass and then keep going lower until the figure is met.

Pensions? take it out of their pay. Current Federal minimum wage for ALL EPS employees and appointees until it’s paid for. No pension fund, no paid vacation or sick leave. No paid Holidays.

It is a good dream, but only a dream.

I’ve been on the Republican party over this since it happened. Especially Cory Gardner & the rest of the state Republican delegation. Till now they’ve not done a damn thing except use it as a political platform to promote themselves along with Democrat senator Michael Bennet as a part of the parties message of bipartisanship to get things done.
I’d not hold my breath this is anything but more of the same. Fire breathing Republicanism less than 6 months away from the election.

Judging from the color of the river, I believe the pollutant is at least 50% butter nut squash.

My wife’s high school biology teacher’s (who we still see regularly) brother owns the mine. I’m pretty certain he didn’t even know what was in there when he bought the land long after the mine was sealed off. How much do you want to bet the EPA blame’s the whole thing on him?