Or what’s left of them after redaction 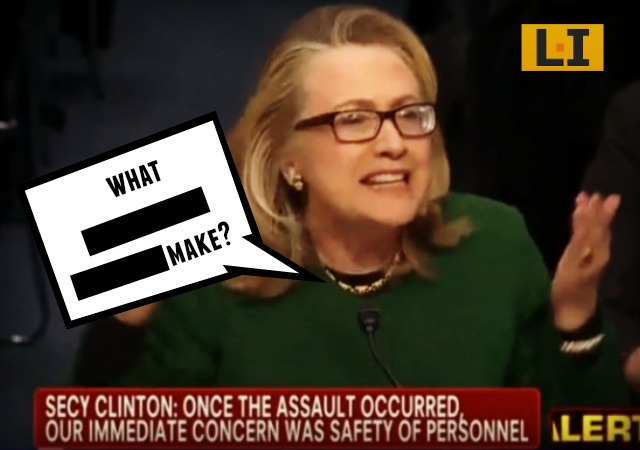 The emails we release today do not change the essential facts or our understanding of the events before, during, or after the attacks.

We’re sifting through the emails one at a time, but this is what we’ve found thus far:

Based on this chunk of emails, the majority of Mrs. Clinton’s communications with her staff involved abreviated printing directive, “Pls print.” “Heavily redacted” is a generous description of this Friday document dump. 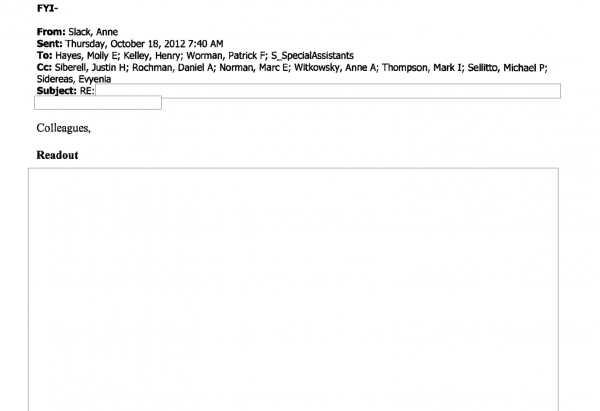 Two days after the Benghazi attacks, a Clinton aid sent an email summarizing the President’s phone conversations with Libyan and Egyptian presidents. But we’ll never know what those conversations entailed because, well… 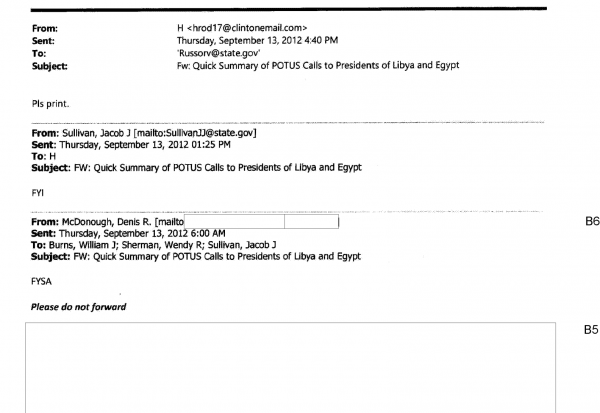 FOIA exemption B1 means info is classified. And numerous emails show HRC received such info on her personal address pic.twitter.com/Z1V90TSYsj

As we noted at the time, how Mrs. Clinton was able to function as the Secretary of State and not transmit classified information via email as she claimed is… suspect. Further, if this email sample is indicative of what the State Department does on a daily basis, then we must wonder what they actually do, aside from passing around Politico articles.

Immediately after the 9/11 attacks on the U.S. Consulate in Benghazi, there are multiple references to an anonymous, “sensitive source” who claimed the now famous YouTube video agitated demonstrators and ultimately resulted in the attack. 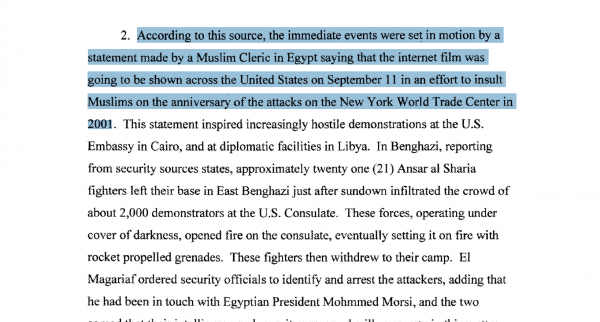 Here, the source is listed as a senior security officer, and multiple causes — not one, were said to be the reason for the attacks. 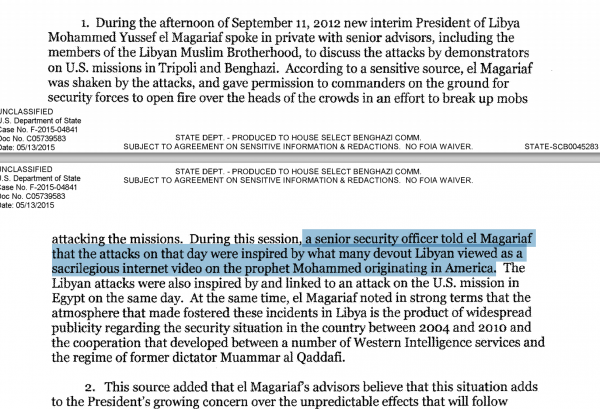 That morphed into the State Department’s position that the YouTube video was solely responsible despite other evidence to the contrary.

Hillary Clinton appears to confuse Chris Stevens and Sean Smith, both of whom were killed in Benghazi pic.twitter.com/3rx62URAhy

We’ll keep you posted as we and others are able to dig through these more thoroughly.

No, for two reasons:

1) If classified, they weren’t classified until later.

2) It doesn’t have to be “classified” to be redacted.

Annnnd, I would believe her for what reason?

It really doesn’t matter if Hillary sent “classified” or not. Of course, any “classified” would be gravy, but there is no government on earth which wouldn’t be slobbering buckets over the thought of having access to the U.S. SecState’s private email.

If you think all classified info resides on its own special, secure network like its supposed to you’re obviously ignorant of what the biggest loophole in the system is…the user. Classified doesn’t have to cross networks between SIPR and NIPR, any known classified info can be typed up on a NIPR email and sent to literally anyone, including the guy who sends you emails for Canadian Viagra. Know what you’re talking about before you make nefarious statements like there’s no possible way classified info could be on her server.

But we’ll never know what those conversations entailed because, well…

Not never, but it’s not very likely before the 2016 election. At least without a leak or somebody’s testimony to which executive privilege is waived.

AIf all else fails, eventually you’ll be able to find the answer to that question in the Obama library in Chicago, at least if you get a special waiver. Or maybe trhough the FVoiA after it gets declassified.

I understand there is software that can undo the redacted cover up – no?

If they used Microsft Word maybe.

The Cairo demonstration was planned at least a month in advance by Muslim Brotherhood leaders. The demonstration was boosted by spontaneous demonstrators because Egyptian national TV broadcast part of the offensive video the night before, claiming it was being broadcast nationally in the US.

Egyptian national TV is controlled by the government, then controlled by Obama’s MB pal, Morsi – who coincidentally released one of the ringleaders of the Benghazi attack from a Cairo prison just over two weeks before the assault.

It’s not illegal to possess classified information if it was acquired before it was classified.

We have to be careful about trying to find technical violations. It will play into the Clintons’ hands. They are very experienced at handling scandals, being lifelong criminals.

The Cairo demonstration was planned at least a month in advance by Muslim Brotherhood leaders.

I didn’t know this, but this is considstenmt anyway – I just didn’t know they left behind evidence – taht the video was publicized, and probably uploaded and probably made at the expense and by an agent of the Moslem Brotherhood or allies of it.

Here, the source is listed as a senior security officer, and multiple causes — not one, were said to be the reason for the attacks.

Peobably Wanis al-Sharif, then the Libyan deputy minister for the Interior in charge of eastern Libya, whose name is spelled in the Latin alphabet in a variety of different ways.

The account by the official, Wanis el-Sharif, given to a few reporters here, was the most detailed yet of the chaotic events on Tuesday in this eastern Libyan city that killed J. Christopher Stevens, the first United States ambassador to be killed on duty in more than 30 years.

Mr. Sharif, a deputy interior minister, said Mr. Stevens and a second American diplomat, Sean Smith, were killed in the initial attack, which began as a disorganized but angry demonstration by civilians and militants outside the American Consulate on Tuesday, the anniversary of the Sept. 11, 2001, attacks. The protest escalated into an assault by as many as 200 people, some armed with grenades, who set the building on fire.

Mr. Sharif said the second attack was a premeditated ambush on the convoy by assailants who were armed with rocket-propelled grenades and apparently knew the route the vehicles were taking…..

…“The first part was chaotic and disorganized. The second part was organized and planned,” he said. The ambushers in the second assault, he said, apparently “had infiltrators who were feeding them the information.”

Parts of Mr. Sharif’s account were not consistent with what other Libyan witnesses have said, and his version has not been corroborated by American officials, who have said it remains unclear how and where Mr. Stevens was killed….

All this was on page A10 of the Friday, September 14, 2012, New York Times, under the the headline: In Libya, Chaos Was Followed by Organized Ambush, Official Says

“Hillary Clinton appears to confuse Chris Stevens and Sean Smith, both of whom were killed in Benghazi”

Ha! Little people. Pieces on a chess board. I mean, how much could they do for Ol’ Walleyes, really? When did she ever pay any attention to these nothings?

After he was dead, both Hillary Clinton and Barry Obama were referring to “Chris” (Stevens) as their “friend” or even their “good friend.”

Apparently Ambassador Stevens just wasn’t a good enough “friend” of Hillary’s for her to keep details about his whereabouts secure, even though she knew he was in a very dangerous place and had been begging her for better security for months.

Hillary Clinton appears to confuse Chris Stevens and Sean Smith, both of whom were killed in Benghazi

.
Not necessarily Hillary Clinton. Her close aide, Cheryl Mills, may have supplied it to her.

Somebody, at least, seems to think only one person was killed, and doesn’t have his name down solid. But anyway, however the name “Chris Smith” started, whether Cheryl Mills or somebody else said that to Hillary, or Hillary misremembered the name, that’s right in one respect – Hillary does not seem to know the name of the Ambassador by heart.

She seems to be the first one on that e-mail thread.

Sopmeone apparently heard both names and thought they were one person.

Jake Sullivan: “our view that this started spontaneously and then evolved”

That means the U.S. government position. Jake Sullivan may believe it to be, if not certain, possibly true. He was not really all that familiar with the events.

To now classify Hillary’s emails, after the fact, does not excuse her from breaking the law while sending or receiving the same information. The criteria for deeming something “classified” (as outlined by Executive Order 13526) is met when “unauthorized disclosure of the information reasonably could be expected to result in damage to the national security.” If Hillary didn’t understand when she conducted writing and conversing with emails that are “now” (since being released) classified then she was clearly unqualified to be allowed access to any sensitive information much less classified information!

Did any of you know Hillary and Obama were behind Fast&Furious in a clear attempt to undermine the 2nd Amendment?

Get this: Hillary spoke in Mexico City in March of 2009 and she said “Our inability to prevent weapons from being illegally smuggled across the border to arm these criminals causes the deaths of police officers, soldiers and civilians.” http://www.nytimes.com/2009/03…

On May 3rd of 2009, Obama spoke in Mexico City and said “We recognize that most of the guns used to commit violence here in Mexico come from the United States. In America, our Constitution guarantees our individual right to bear arms, and as President I swore an oath to uphold that right—and I always will. At the same time, as I’ve said back home, I will continue to do everything in my power to pass common sense gun reforms that keep guns out of the hands of dangerous people—reforms that will save lives in both our countries. Meanwhile, we’ll keep increasing the pressure on the gun traffickers who bring illegal guns into Mexico, and we’ll keep putting these criminals where they belong—behind bars.” http://blogs.wsj.com/washwire/…

“From 2009 – 2011, under Operation Fast and Furious, the Bureau of Alcohol, Tobacco, Firearms and Explosives (ATF) Phoenix Field Division, along with other partners, allowed illegal gun sales, believed to be destined for Mexican drug cartels.” http://www.cnn.com/2013/08/27/…

Funny thing about timelines. They tell a factual story you can’t argue with. . .