Michigan Attorney General: “No one is above the law, not on my watch.” 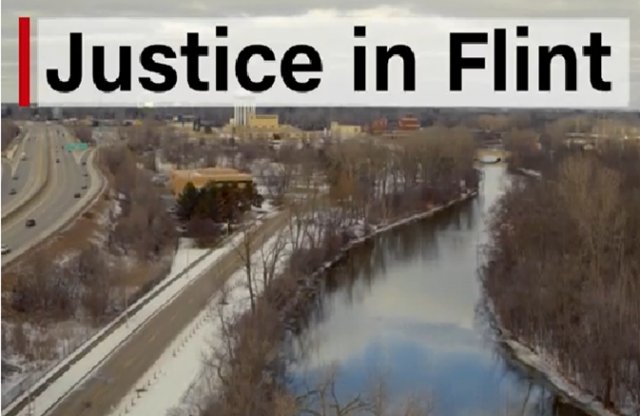 The #FlintWaterCrisis, which we have been following closely, has formally become a criminal case.

Three government employees are now facing serious charges for their alleged involvement in perpetuating conditions that led to the elevated levels of lead in the public water supply.

The charges, a mixture of felonies and misdemeanors, stem from an investigation led by Schuette’s office into how Flint’s water system became beset with lead leaching from pipes into tap water — a public health emergency that has roiled Gov. Rick Snyder’s administration.

No word if Susan Hedman, the former director of EPA’s Region 5 (which oversees much of the Midwest including Michigan), will be facing charges. Hedman was blasted by House Committee on Oversight and Government Reform Chairman Jason Chaffetz during a portion of a congressional hearing on this matter that focused on a memo revealing officials didn’t think “Flint is the community we want to go out on a limb for.”

However, Michigan Attorney General Bill Schuette is heading the investigation and he says more charges will be coming. Schuette doesn’t seem particularly impressed with government titles:

Three government employees charged in connection with the Flint water crisis “failed Michigan families,” and the charges against them “are only the beginning” of a lengthy and exhaustive probe, state Attorney General Bill Schuette said Wednesday.

While Flint residents have said they feel the criminality that led to poisonous water being pumped into their homes stems from the top, namely Gov. Rick Snyder’s office, Schuette promised that no one guilty of wrongdoing would escape justice, no matter “how big a shot you are.”

Specifically, the charges against the three are as follows:

• Glasgow is charged with tampering with evidence, a felony, and willful neglect of duty, a misdemeanor. The tampering charge carries a maximum sentence of four years in prison and a $5,000 fine…

• Busch is charged with misconduct in office, tampering with evidence, conspiracy to tamper with evidence — all felonies — and two misdemeanor violations of the Safe Drinking Water Act, one involving treatment, the other involving monitoring…

• Prysby faces the same allegations and charges as Busch, plus an additional felony charge of misconduct in office. That count states he authorized a permit to the Flint Water Treatment Plant knowing it “was deficient in its ability to provide clean and safe drinking water for the citizens.”

Flint residents have strong opinions on which government officials should be charged next:

Laura McIntyre said it would be a “miscarriage of justice” if Gov. Rick Snyder isn’t charged, and she worries that Wednesday’s announcement of charges represented “just two to three people who will take the fall for actions that have included many, many more people. It definitely goes much higher.”

…In addition to Snyder, she would like to see former Flint Emergency Manager Darnell Earley charged for the decisions he made — or precautions he didn’t take — in switching the drinking source.

I will say this for Schuette: He is currently doing the real work of an state Attorney General, instead of conducting a political persecution. Let’s hope it stays that way.

Lead in our drinking water. The whole point of having a government is to avoid this kind of danger.

The whole point of having small localized government with an invested and involved citizenry is to avoid this kind of danger.

The EPA should be dissolved in its own waste.

The EPA has suffered from lack of direction by Congress, ever since the US substantially met all of its initial pollution goals.

It started looking for something else to justify its existence and salaries, and came up with the regulation of non-pollutants essential to life on this planet, instead of something straightforward, like continued enforcement of the laws in place, hence disasters such as the BP oil spill, the Animas River spill, and the Flint lead scandal.

The common element in each of these stories is failure by a government decision-maker to pay attention to well-known technical information and violation of known contemporary engineering principles.

The whole point of having small localized government with an invested and involved citizenry is to avoid this kind of danger.

The EPA is a cabal of non-elected, non- personally obligated federal employees who have no vested interest in Flint MI or in any other entity. It interests lie, as you have mentioned, in its preservation of its existence and its continued employment (and its proximity to the government trough).

There are multitudes of private PEs who can be held legally accountable for water purity in Flint MI.

So, only three people?
Is that all?

I don’t know about criminal charges, but everybody involved should, at least, be fired; all the way up the “command” chain, all the way to the top.

this guy sounds like a good one to charge.
former Flint Emergency Manager Darnell Earley charged for the decisions he made — or precautions he didn’t take — in switching the drinking source.

not sure why they want Snyder’s head other then he is a hated Republican.

I guess the Flint City Council is blameless in all this.