The first victim of the Environmental Inquisition? 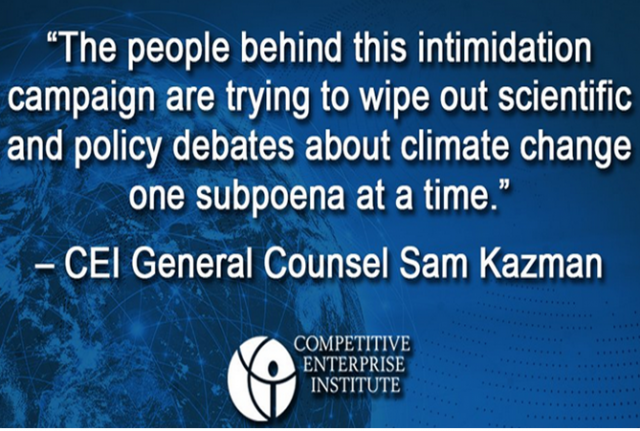 Last week, I noted that a coalition of 17 state attorney generals had formed, which intended to promote the climate change agenda by targeting the fossil fuel industry.

The first victim of the Climate Change purge is the Competitive Enterprise Institute (CEI), a wonderful non-profit organization dedicated to protecting free enterprise from being undermined by progressive activists of all stripes. Attorney General Claude E. Walker of the U.S. Virgin Islands has issued a subpoena in an attempt uncover the content of CEI’s comprehensive work on climate change policy.

“CEI will vigorously fight to quash this subpoena. It is an affront to our First Amendment rights of free speech and association for Attorney General Walker to bring such intimidating demands against a nonprofit group,” said CEI General Counsel Sam Kazman. “If Walker and his allies succeed, the real victims will be all Americans, whose access to affordable energy will be hit by one costly regulation after another, while scientific and policy debates are wiped out one subpoena at a time.”

The subpoena requests a decade’s worth of communications, emails, statements, drafts, and other documents regarding CEI’s work on climate change and energy policy, including private donor information. It demands that CEI produce these materials from 20 years ago, from 1997-2007, by April 30, 2016.

The questionable rationale for the subpoena comes from the legal attempt to attack ExxonMobil using civil racketeering statutes, likening the petroleum company’s use of climate data it collected to the tobacco industry’s suppression of cancer data.

A CEI senior attorney said the organization has received money from Exxon years ago but couldn’t say how the organization might be connected to Mr. Walker’s civil racketeering inquiry. The organization, which argues that the consequences of climate change have been exaggerated by alarmists, is also defending itself in a defamation lawsuit brought by a prominent climate scientist.

A spokesperson for Exxon declined to comment. Exxon has previously assailed the climate change probes. Its vice president of public and government affairs said it was “preposterous” to suggest that the company suppressed climate change research and called the investigations “politically motivated” and an “attempt to limit free speech,” according to the Washington Post.

Megan McArdle, is a Bloomberg View business news columnist, believes man-made global warming is occurring. However, she sees this as an unfair tactic being used to silence debate on the subject.

We are committed to ensuring a fair and transparent market where consumers can make informed choices about what they buy and from whom. If ExxonMobil has tried to cloud their judgment, we are determined to hold the company accountable.”

That wasn’t much of an explanation. It doesn’t mention any law that ExxonMobil may have broken. It is also borderline delusional, if Walker believes that ExxonMobil’s statements or non-statements about climate change during the period 1997 to 2007 appreciably affected consumer propensity to stop at a Mobil station, rather than tootling down the road to Shell or Chevron, or giving up their car in favor of walking to work.

If the AG’s involved in the “United for Clean Power” movement were truly concerned about average Americans instead of political power, they would read the real science data contained in the CEI materials. Conveniently, no subpoena is needed. They need only click to this link…I did the search for them.

I would also suggest that if the Virgin Islands AG really wanted to help his citizens, then following up on the potential credit card abuse of its Governor might be a more worthy target of legal efforts.

The results were not ideal for Mapp — or the taxpayers of the Virgin Islands.

Last year Jonathan Austin of the Daily News documented, through public records requests, how Mapp used the credit card for personal purchases. According to Austin, this included “beer and groceries, late-nights at a local rib joint, lunches, dinners, $1,200 New York City meals, upgrades to first class for his flight to Guam. [Mapp] also dropped $5,000 at Macy’s in Miami for sheets, towels and bath accessories.”

The next phase in a political witch-hunt would typically be burning at the stake….but it would probably emit too much carbon dioxide.

So, they are not concerned about the toxic and obfuscated consequences of non-renewable technologies that implement low-density energy conversion of renewable, intermittent drivers. The toxic byproducts in China etc. are beside the point, and the mass environmental disruption, destruction, and corruption are too.

It irritates the crap out of me that they use our tax money to pay for this. That in itself should be illegal.

It’s kind of difficult to have an economy without any fuel to run it.

That is precisely the point of all of this.

Yes many of the greens are just reds in disguise. They are ANTI-capitalists in their mindsets.

The American VI would be Haiti without the modernity that simple electricity provides.

I would think that the last place the warmists would want to contest the “deniers” would be in court. A court fight would present the “deniers” the opportunity to present their case against AGW, which is formidable. They would even have to disprove AGW, all they would have to do is demonstrate that the science is not “settled” and that what is happening is a scientific debate. Or do the warmists think that the courts will criminalize some forms of scientific debate, depending on the opinion being promoted? I’m sure they’d like to see that.

Should have been “They would NOT even have to…”

Unfortunately, your argument depends upon a neutral, unbiased judiciary. I’m not sure that exists anymore.

There 17 State Attorney Generals in the United States that think it is ok to engage in law fare, namely the filing of lawsuits for the purpose of imposing costs on non-profit entities engaged in public debate.

I am not surprised that bonehead from California, Kamala Harris is involved.

Here are the most easily available names of some of the others.

It’s only a matter of time until they march out #-type race-based street thugs to augment the legal Hillaryhunt.