Graduate of Catatonic State U 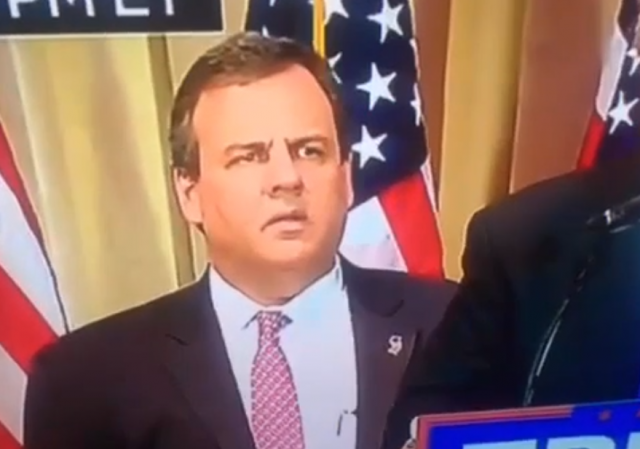 If you liked Trump treated Christie like a one-night stand: 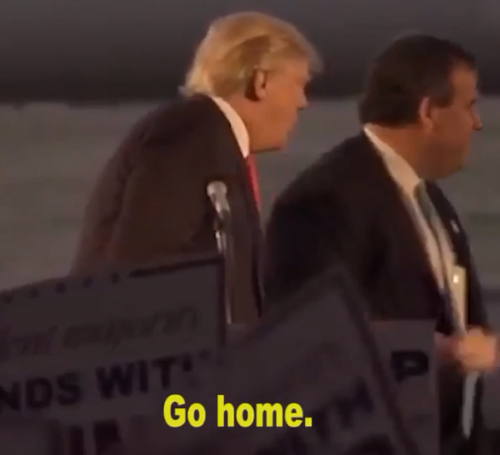 Ok this is my favorite #FreeChrisChristie post – 6 million loops!! https://t.co/BgvsrHmoaK

I can't be sure, but I think @ChrisChristie was blinking Morse Code for "Send. Help. Now." #FreeChrisChristie pic.twitter.com/2AQ1bBqTLU

The “go home” nonsense already has been debunked.

Not to mention the immediate post-primary behind-the-scenes threats to officials wishing to endorse Trump. Not unlike the crap in this post. Like this:

The Washington Examiner Promises To Destroy Any DC Politician Who Supports Donald Trump.

Not a fan of Christie, but my first reaction was low blood sugar. Having lap-band surgery, means you have to eat many small meals due to the size of your stomach. Being a long busy day, he may not have had time to eat something prior to that event. I have no evidence this is true, it’s what first came to mind the other night.

Oh Professor, you’re being naughty! You’re going to get all the humorless Trumpkins’ knickers in a knot again 😀 😀 😀

The seismographs are red-lining…

I’m currently a Cruz guy.
Regarding The Donald, I’ve gone from being vaguely supportive (“hey, he’s getting lots of votes from non-traditional voters”) to worried (“this could be like the disaster we had with Ah-nold here in CA”) to seriously concerned (“Trump U? The guy is a crook!”). Now I’m feeling a certain grudging respect:
1) He’s built a pretty strong movement
2) He energizes the common people who don’t have a voice
3) He’s batted away the GOPe challengers like light weights
4) He can’t possibly be as bad as Hillary will be, if only because the Dems and RINOs in Congress and MSM won’t allow it
Add to this two more factors: we elected a Repub House and a Repub Senate. Repubs governors and legislatures are record highs…yet…where are Dem policies being rolled back? I give Trump this: he fights.
And finally, give The Donald credit: he’s willing to stand up and take the abuse. It can’t be easy to have so many committed to insulting you and tearing you down. No one forced him to take the heat, he stood up.

Needless to say, if he wins the Repub nom, I’ll vote for him. With trepidation, but proudly.

jim – i could have written that, just not as well.
I hope, forlornly, for a trump/cruz ticket.

Very kind, and while I agree that Trump/Cruz is likely a forlorn hope I do think a Trump Admin will pull in some excellent people though also its share of charlatans.

Events are on the move, all over the world. It’s going to get messy, I think.

Speaking of people who actually say things well, I still feel like this blog post hits the right balance for people like you and me.
http://admin.americanthinker.com/blog/2016/01/a_plea_to_conservative_voices.html
“… conservatives, and I include myself, are wedded to what we could call a conservative victory script – i.e., elect a strict constitutionalist president, Tea Party majorities in both houses, the right Supreme Court appointees, and so on down our flower-strewn imaginary road back to the former Republic. … Something different is going on in America … Start thinking about a new victory script.”

I noticed all that Trump love again tonight. Trump only loves Trump.

Christie was never on my radar – his gun control history is concerning, his Obama embrace during Sandy before the 2012 vote disturbing (especially when you consider FEMA had more supplies prepositioned & deliver aid faster to Katrina victims than Sandy victims). Now he’s dead to me.

The Trumpkins’ refusal to condemn and expel the neo-nazis, white supremacists, Stormfronters, and antisemitic conspiracy nuts from their midst is too widespread to be ignored. I can only assume they accept them. I not only will never vote for Trump, I will never hire or do business with anyone I know to have supported him.

Although I thought Christie might have been in a catatonic fugue, I soon realized he was thinking “What in the hell have I done? I am totally toast in NJ and probably everywhere else except on the “Apprentice”. If the Don doesn’t win I am going to lose weight big time!”

Maybe you should save the Slow News Friday silliness for, you know, like … Friday.

He’s just practicing his mean face for when he gets to prosecute Hillary.

I noticed and he did have an odd expression, kinda tired looking. I thought it rather funny when trump mentioned NJ…

He came alive a bit for that.:)

My New Jersey cousin just sent me this link: http://doyourjoborquit.com

New Jersey Governor Chris Christie looked nothing so much as a member of Soviet Politbuto standing on Red Square on on May 1 or November 7 (the anniversary of the October, 1917 Bolshevik Revolution converted to New Style) especially in Stalin’s time.

Chris Christie denied that there was anything special, i.e. he wasn’t being held hostage and he wasn’t thinking “What ahve I done, by endorsing Donald Trump?”

Maybe looks don’t reveal so much. I think like this: What he has in common with the Soviet apprachniks is that he was very disciplined.

If it had been a diffferent situation, he would have either been walking around in the background, acting at ease, loose, or else he would have gotten off the stage after introducing Donald Trump. He wouldn’t just stand there, right behind him, stone-facedly, like there’s nothing for him to do, but he has to be there and he can’t say anything. He really looked like he was afraid of making a wrong move.

Doubling down on this nonsense, eh Professor?

You will, some day, look back on this primary season with, at best, embarrassment.