After 7 Years of Failure, Obama Plans One More Push for Mideast Peace

After 7 Years of Failure, Obama Plans One More Push for Mideast Peace

Pressuring Israel while forgiving Abbas is a recipe for failure 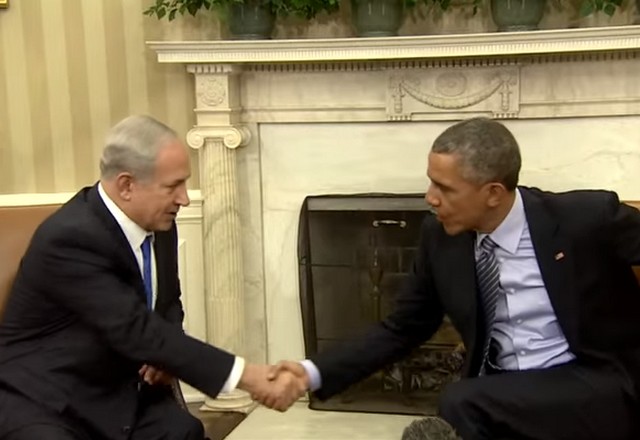 Ahead of Vice President Joe Biden’s trip to Israel, The Wall Street Journal reported earlier this week that the White House is considering new efforts to revive the Middle East peace process.

The internal discussions are aimed at offering a blueprint for future Israeli-Palestinian talks in a bid to advance a critical foreign-policy initiative that has made little progress during Mr. Obama’s two terms in the White House, the officials said.

The strongest element on the list of options under consideration would be U.S. support for a Security Council resolution calling on both sides to compromise on key issues, something Israel had opposed and Washington has repeatedly vetoed in the past.

Other initiatives could include a presidential speech and a joint statement from the Middle East Quartet, an international group comprising the U.S., the United Nations, the European Union and Russia.

According to the Journal, the President Barack Obama hasn’t made up his mind but “is considering a range of options.” In any case no decision is expected until later this year.

The administration’s last efforts came to naught two years ago, according to the Journal,  “amid arguments over land swaps and prisoner exchanges.”

This is misdirection. It is far from the whole story. Tzipi Livni speaking to columnist Roger Cohen in December 2014 said that Obama had presented a framework agreement that Prime Minister Netanyahu had accepted with reservations. Palestinian Authority President Mahmoud Abbas never responded to the president’s initiative. Then he signed on to 15 international conventions in violation of the stipulation that peace and statehood be achieved through bilateral talks and subsequently made a reconciliation agreement with the terrorist group Hamas, effectively ending the peace process.

Of course a different remark made earlier by Kerry got a lot more attention. Eran Lerman in an interview last month described what happened:

In this context, Lerman refers to last year’s article in Walla! by Amir Tibon, which published a joint investigation with American journalist Ben Birnbaum on the collapse of negotiations in March 2014. Tibon and Birnbaum revealed that Netanyahu had been prepared to carry out very large withdrawals from Judea and Samaria if his terms were met, but the process died because Abu Mazen did not respond to Kerry’s proposed outline of a deal. “The article was excellent, and I have nothing to add,” says Lerman.

Lerman is angry with Kerry, who was aware of the positions Netanyahu had expressed in confidence and yet publicly blamed Israel for the breakdown. “I’m not one of those who think that Obama is innately hostile,” he says. ”The president thought there was an opportunity, because Abu Mazen is a reasonable man who opposes terror, and Netanyahu has enough political power. When it didn’t happen, he was frustrated. But I do ask myself why John Kerry had to pull that ugly stunt with the ‘poof’ speech.” Lerman is referring to the secretary of state’s comment to the Senate that the sides were about to reach an agreement, “but then 700 units were approved in Jerusalem and then ‘poof’—that was sort of the moment.”

“Kerry knows the truth,” says Lerman. “He knows that he was pacing around here like a caged lion, and that the Palestinians were the ones who got up and left. I was given an order—and my friends at the Foreign Ministry were angry with me because I did what they believed should have been their duty; perhaps they are right—to share with the international community a paper called “Dirasa (study) number 15,“ written by Saeb Erekat before Obama’s meeting with Abu Mazen at the White House [at which Abbas was presented with Kerry’s proposal – AK]. The paper contains an entire strategy of making a pact with Hamas and appeals to international bodies, and was written with the clear advance knowledge that the Palestinian Authority would say no to the Americans, or at least wouldn’t say yes.”

It should be noted that later on after the PA-Hamas agreement, even Secretary of State John Kerry acknowledged that it was appropriate for Israel to suspend talks with the PA.

Now two years later, the administration is still fixated on settlements and Israeli concessions. (According to the Journal any demands on the Palestinians, such as renouncing the right of return, are just words.) In other words despite being stiffed by Abbas, the Obama administration wants to pressure Israel to give the Palestinians everything they demand.

At the beginning of Obama’s presidency, Washington Post editor Jackson Diehl wrote one of the most revealing columns on the administration’s Middle East policy called Abbas’s Waiting Game on Peace with Israel.

Until Israel meets his demands, the Palestinian president says, he will refuse to begin negotiations. He won’t even agree to help Obama’s envoy, George J. Mitchell, persuade Arab states to take small confidence-building measures. “We can’t talk to the Arabs until Israel agrees to freeze settlements and recognize the two-state solution,” he insisted in an interview. “Until then we can’t talk to anyone.” …

What’s interesting about Abbas’s hardline position, however, is what it says about the message that Obama’s first Middle East steps have sent to Palestinians and Arab governments. From its first days the Bush administration made it clear that the onus for change in the Middle East was on the Palestinians: Until they put an end to terrorism, established a democratic government and accepted the basic parameters for a settlement, the United States was not going to expect major concessions from Israel.

Obama, in contrast, has repeatedly and publicly stressed the need for a West Bank settlement freeze, with no exceptions. In so doing he has shifted the focus to Israel. He has revived a long-dormant Palestinian fantasy: that the United States will simply force Israel to make critical concessions, whether or not its democratic government agrees, while Arabs passively watch and applaud. “The Americans are the leaders of the world,” Abbas told me and Post Editorial Page Editor Fred Hiatt. “They can use their weight with anyone around the world. Two years ago they used their weight on us. Now they should tell the Israelis, ‘You have to comply with the conditions.’ “

What’s important here is not just that Obama signaled his policy of mostly pressuring Israel early, but that he communicated to Abbas, letting the Palestinian leader know that he had no incentive to compromise.

Obama likes to boast that he has found new ways of looking at things in foreign policy because the old ways no longer worked, but according to Diehl he’s been taking the same approach of pressuring Israel first for the past seven years and achieved nothing. But he insists on continuing to pressure Israel and letting Abbas get off scott-free for his intransigence.

It’s not just that Abbas, as noted above, has been working against Obama’s efforts diplomatically but he still incites violence and has failed to build the necessary institutions to make a Palestinian government viable.

After the killing of an American graduate student near where Biden was, it would have been appropriate for the administration to condemn incitement unconditionally and immediately. He finally condemned the Palestinians for their failure to condemn the terror attack somewhat belatedly.

The Lerman interview was interesting and he made observations in line with what Arsen Ostrovsky blogged earlier this week regarding Israel’s foreign policy. Lerman said that “In most of the world, the situation has improved,” and in answer to whether Netanyau’s efforts were underappreciated in the media Lerman said, “In terms of foreign relations, yes.”

Failure implies that what’s happening is contrary to Obama’s goals.

I’m sure he considers the continued existence of Israel as a failure of his middle east policy.

I don’t know if there is a leader and follower, but it seems like the current presidential administration and most academic administration have the same philosophy. They treat the most radical elements with a respect and decorum that is better than most other groups of ideas/ethnicity, etc. As if it is earned or merited and their grievances are 100% acknowledged. Or in some cases perhaps either administration agrees fully.

Such a change in such a short time.

People everywhere in the Middle East, from Israelis to ISIS, must be thinking to themselves,”Oh no, here he comes again.”

Pressing Israel won’t work. They are not the impediment to peace.

This is the impediment to peace. It is real, it is active, and until it is repudiated by Muslims, there will be no peace.

Sorry to sound like a broken record, but I do not believe that current conflicts have anything to do with Israeli behavior. There is nothing Israel can do to put an end to this conflict. Rather, current events are pushed by other current actors. Hamas is busy training up about the third generation of cannon fodder, and the appalling results are open and obvious. Placing pressure on Israel is not going to address this problem: it will exacerbate it.

Pressuring the civilized to cater to the savage is the only tool they know or want to use. Why they are so willfully blind is anyone’s guess.

There is nothing Israel can do to put an end to this conflict.

Oh, yes there is.

Start interfering in Arab, Moslem and Palestinian internal affairs (intelligently, and not for minor gain.)

Support their friends and oppose their enemies.

Start making true the accusations that some important people are agents of the Zionists. Getting them to the point where they are not afraid to admit it.

Leaving the countries around Israel to stew in their own juice hasn’t done Israel any good.

Being the security guarantee for the Kingdom of Jordan only goes so far.

The only issue that matters is terrorism, and a determination to fight terrorism.

There can be no peace until there is an end to Arab self-righteousness, and an abundance of Arab goodwill.

He can see the end of his presidency around the corner and he is becoming desperate.
This man cares about one thing and one thing only: himself.

He wants to leave a legacy, but time is running out on him. He would never admit it to others, but he knows that his baby obamacare is a monumental embarrassment. Now Iran is laughing and making a mockery of us, thanks to him.
Also, America is more divided than ever, and though the price of gas came down, it means very little to the millions who can’t find a full time job.

So he’s trying more crap: shaking hands with the Cuban murderers, and now meddling in the Middle East again.

King Midas backwards; that’s his legacy: Turn everything he touches into excrement.

That is an insult to excrement.

That traitorous piece of garbage never wanted ‘peace,’ but wanted bringing Israel to its knees, along with the US.