Madeleine Albright: “special place in hell” for women who don’t back Hillary

Madeleine Albright: “special place in hell” for women who don’t back Hillary

Women who #FeelTheBern may Feel the Burn! 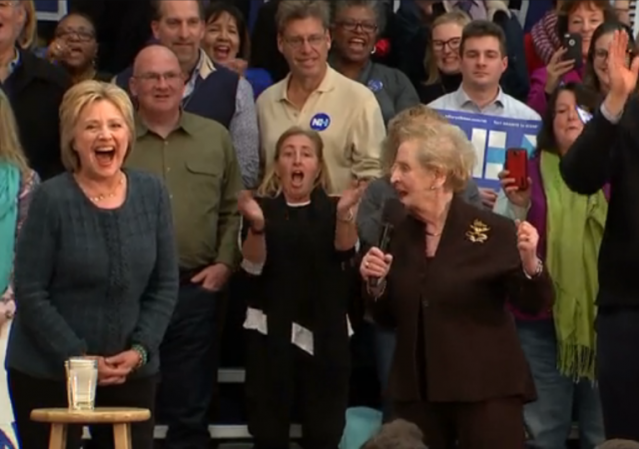 There is an old adage that bad things come in threes.

Today, there are three omens showing that Hillary Clinton’s campaign may be floundering worse than previously imagined.

We have covered two of those signs already: Donors wanting to Draft Vice President Joe Biden for the party’s nomination and Gloria Steinem indicating women who vote for Senator Bernie Sanders are actually after men.

Unexpectedly, that last bit is not playing too terribly well among progressive women.

Now comes the third sign of the potential Clinton Apocalypse! Former Secretary of State Madeleine Albright implies that women who #FeelTheBern really will!

Former Secretary of State [Madeleine] Albright on Saturday said there was a “special place in hell” for women who backed Sen. Bernie Sanders over Hillary Clinton in Tuesday’s primary.

Albright, who served as secretary of state under former President Bill Clinton, came here to make the pitch for fellow former Secretary of State Clinton.

During her remarks, Albright made it clear to women in attendance in the Granite State’s capital city — especially those backing Bernie Sanders — that they need to help out Clinton because they have a duty to do so. The former secretary repeated her often-used line that there is “a special place in hell” for women who don’t help out other women.

“I see a lot of young women in this audience. And you that are here cheering understand this: There is some few I heard somewhere out there that don’t understand the importance of why young women have to support Hillary Clinton,” Albright told attendees. “The story is not over. They are going to want to push us back. Appointments to the Supreme Court make all the difference.”

#FeelTheBern Madeline Albright, you can't shame me into voting for Hillary. I'm with Bernie!

We don't have to do anything you say #Albright, you are NOTHING to us, UR NOBODY to us.
#HillarySoEstablishment #FeelTheBern #Bernie2016

Predicting the outcome on the Democratic race in Tuesday’s New Hampshire primary is far easier than the Republican one: In current polls, Sanders tops Clinton by a two-to-one margin.

It will be interesting to see of Sanders out-performs Clinton in this state, especially among women. There will be no coin tosses that will save the former Secretary of State from a stinging loss. Interestingly, Sanders’ supporters are skeptical about the results of the coin flips that determined delegates from the Iowa Caucus, and have some clever memes underscoring their ire:

It will be fascinating to see if the upcoming loss has been worse by the statements of two icons of feminist activism, Steinem and Albright.

I disagree with Jonah Goldberg: Clearly, irony is alive and robustly healthy!

Albright: ‘Special place in hell for women who don’t help each other’

Although considerably further from the fire than for a woman who won’t even abide by the rules and procedure when defending a man accused of raping a child.

And Hellary’s earned both positions. Who says she’s not “accomplished”…?!?!

Voting for Sir Edmund because she’s a woman is like eating a turd because it looks like a Tootsie Roll.

So, Madam Secretary, tell me more about your efforts to get Carly Fiorina a spot in the debate last night, and what it was like campaigning for Sarah Palin.

scrmndemon: This is my official “Comment of the Day”. Thank you!

The liberals are always pushing their SECULAR version of religious tenets.

One can certainly believe that the US should have a female President as a general rule and still believe that Hillary is not that person.

We elect INDIVIDUALS to office not shibboleths, yet liberals do not want anyone to actually think through the natural logic of their mantras.

‘Special place in hell for women who don’t help each other’
Gloria, Maddie, Hillary and the rest will be there for abandoning millions of women to Sharia.

Okay, so change around the identity group and see how the MSM reports it. Republican: There’s a special place in hell for Latinos who don’t support Rubio. Every headline for the next month would scream about it.

I thought lefties were against theocracies who oppressed and intimidated the masses with God-sanctioned policies. Are there any intelligent Democrats left who can see through this nonsense, and who have the courage to call their party out on it?

I love it when the shrillster cackles.

What special place in hell is reserved for a woman who aided and abetted in the rape and molestation of women? A woman whose only goal was power and protected her husband from all accusations to get where she is today.

I’m sure Dante is smiling knowing the lowest place in hell is reserved for Hillary and all those who enable her.

Honor your father and mother, Albright.

Two of the three worst secretary of states (and biggest schmucks) in American history – if not world history – right there on stage together.

Clinton gave terrorists sworn to kill us an entire nation (Libya) and Albright gave us a nuclear North Korea.

Missing was the third train-wreck, John Kerry. Probably was bust getting his toenails done.

It doesn’t make sense to me.

I assume, therefore, that Maddy would support Carly over Bernie.

There is a “special place in hell for women who help other women” get there by telling them it’s ok to kill an unborn child and they will help them do it.

And who made her the arbiter of who goes to Hell and where?

Yeah….her own hubris, that’s all.