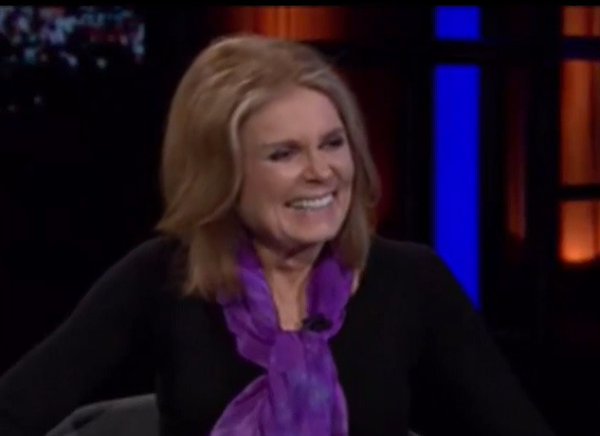 Although she appears to be supporting Hillary this election cycle as she did in 2008, Gloria Steinem endorsed Bernie Sanders in 1996, calling him an “honorary woman.”  This is a common, if bizarre, tactic used by progressives to include whites, particularly white males, in their isolated, divisive little groupings of human beings (remember Toni Morrison calling Bill Clinton the “first black president“?).  This works in reverse, too, as we see with attacks on black, female, Hispanic, etc. conservatives:  they aren’t “authentic” black people, women, Hispanics, etc.

In an interview with Bill Maher, Steinem—a purported feminist and icon among some on the feminist left—has found a new and exciting way to diminish women who don’t think as she does:  she explains that the support of young women for Bernie is actually rooted in their desire to attract boys.

She argues that Bernie’s female supporters are boy crazy and appears to be doing so as a means of demeaning these women.  They’re just silly little girls who aren’t clever enough to understand politics and are only interested in his candidacy because “that’s where the boys are.”  Clearly, if they had more sense, they’d support Hillary as she does.

Jonah Goldberg wins the internet with his response:

If Gloria Steinam say something, you can bet the exact opposite is true.

Ironic from the woman quoted as saying, “the truth will set you free, but first it will piss you off”

This is along the lines of being an honorary lesbian.

These girls that Steinem refers to as supporting Sanders are not boy crazy they are just plain crazy just as those supporting Hillary are.

Who’d have guessed the “Burn” was runnin’ a steamy lil love nest to fuel his campaign? Someone ask Steinem if they aren’t also attracted by Bernie’s pioneering work in rape fantasy theory.