It’s not an easy task 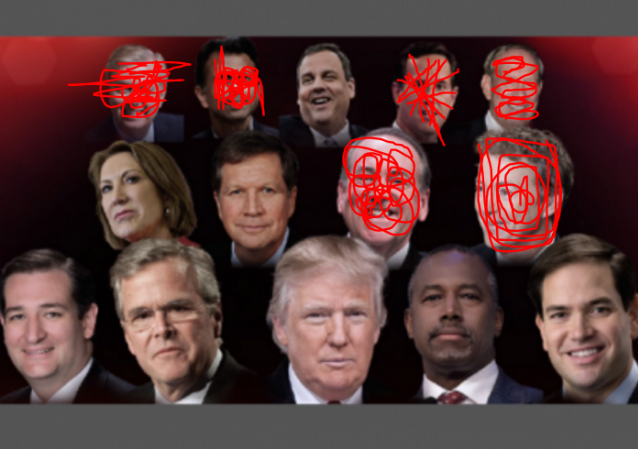 Iowa and New Hampshire could hardly be more different in the composition of their Republican voting population.

For example, evangelicals make up a huge percentage of the Iowa GOP voters—well over half. Although there are some evangelicals in New Hampshire, it’s a lot smaller group than in Iowa:

Four years ago, just 22% of the state’s primary voters described themselves as evangelicals, well below the 57% in Iowa and the lowest rate among swing states. A 2013 Gallup poll ranked New Hampshire as the second least religious state in the country, behind Vermont, based on churchgoing and the importance of religion in daily life.

“Candidates definitely tone things down regarding social issues when they come to the state,” said Stephen Scaer, a 52-year-old special-education teacher who helps run a prayer vigil outside a Planned Parenthood clinic in Manchester, N.H., and favors Republican Carly Fiorina. But, he said, “that’s simply pragmatic. If candidates want to win, they have to.”

The common wisdom on New Hampshire is that it’s fiscally conservative and socially liberal; there are a lot of libertarians there, too (“Live Free or Die” is still alive in New Hampshire).

So when New Hampshirites vote, they’re not necessarily purposely differentiating themselves from Iowans and how that state voted—they just are different from Iowans.

Historically, New Hampshire has tended to favor local New Englanders when they’re running: Romney and Henry Cabot Lodge for the GOP (and Romney came close to McCain there even back in 2008); Tsongas, Dukakis, Muskie, and Kerry for the Democrats. New Hampshire also has tended to favor moderate Republicans more often than conservatives (although Pat Buchanan did edge out Dole there in 1996).

Since there’s no New Englander this year, that would seem to make New Hampshire fertile ground for relative moderates Christie or Kasich or Jeb Bush (who also has very tenuous ties to Maine, although he’s not really thought of as a New Englander). And indeed, those candidates have all had surges in New Hampshire polling, and some (Bush and Kasich, for example) are still doing considerably better in New Hampshire than they’re doing in most other states.

That’s not to say that Trump can’t or won’t win there; he most definitely could, and he’s been leading big for many months in New Hampshire state polls. That’s why a lot of people seem to think he’s got the state sewn up, and that the only question is who will come in second.

Which brings us to the post-Iowa polls in New Hampshire. New Hampshire’s primary is February 9, which is next Tuesday, but the situation in the state still appears very fluid, according to the most recent polls.

Let’s look at the recent CNN/WMUR poll, a rolling poll in which 2/3 of its likely-GOP-primary-voter respondents were polled before Iowa and 1/3 after, 362 and 209 respectively. The questions were asked by landline and cellphone, and note the margin of error: plus or minus 5 for the first group, and plus or minus 6.8 for the second. That’s an enormous margin of error, and that’s not all that’s problematic in the results of the poll. We also learn that only 41% of respondents have definitely decided on a candidate, with an additional 25% only leaning and a full 34% totally undecided.

Makes me almost want to give up even looking at the poll. But hey, I’ll soldier on.

Another recent New Hampshire poll was taken by UMassLowell/WMUR, which also contains both pre-Iowa and post-Iowa results. In that poll, 2/3 were interviewed after Iowa, and there were only 487 likely GOP primary voters, with a margin of error set at plus minus 4.87, not as high as the previous poll but still fairly high.

This poll also shows a post-Iowa uptick for Rubio, but not as big a jump as the other one. For respondents who were polled on 2/4 (the final day of the poll), it shows Trump leading by 34 to Rubio’s 15 to Cruz’s 13. But once again, there are a lot of waverers, with 41% of all respondents saying they could change their minds. The highest “could change mind” responses were for Rubio, Bush, Christie, and Carson, but even Trump had 28% who could change their minds.

So it seems to me that the most valid things these polls reveal are (1) Trump has a strong lead right now, in a race where the vote is split many ways; and (2) so many people say they are still not sure that it remains anybody’s race.

This Politico article focuses on New Hampshire’s late deciders and how often the polls in that state have been just plain wrong for that reason:

“These people really are volatile,” added Monmouth University pollster Patrick Murray. “They really are undecided. Even if they pick a candidate today or tomorrow, they can change their mind.”

According to Politico, New Hampshire’s closeness in time to Iowa traditionally has presented problems, too, because a bounce right after Iowa doesn’t necessarily last till the voting occurs in New Hampshire. What goes up may come down. What’s more, in New Hampshire those who are registered as “Undeclared” can vote in either party’s primary, and there are a lot of “Undeclareds” there, constituting 44% of voters. In addition, voters are so heavily surveyed that they get tired of answering polls, and that can skew the population of respondents.

The biggest factors are that so many primary voters make up their minds the last day or so and there are three days to go, plus there’s a Republican debate tonight. Given the often volatile candidates on stage and that it’s ‘moderated’ by agenda-ridden ABC people, anything could happen. Trump’s demeanor and maturity will be tested – by other candidates, but the moderators will undoubtedly try to wind him up to draw a damaging Trump outburst – and his reactions will be scrutinized by voters. Rubio in particular will be attacked by just about everyone, whether as the second place guy in ‘polls’ or as the frontrunner among GOP moderates (Bush, Christie, Kasich, et al). Conservatives, especially fiscal conservatives such as Cruz, rarely win in New Hampshire, so that pressure’s off and though every candidate is a target of every other candidate, there’s less reason to spend camera time attacking Cruz as opposed to ‘poll’ leader Trump or ‘poll’ up ‘n comer Rubio.

But it’s the GOP debate where most NH voters will get their last dose of the candidates before Tuesday’s NH primary, and given the potential for a rowdy debate plus the unpredictability of several candidate’s reactions and behavior, it is indeed very difficult to forecast.

In both 2008 and 2012 the exit polls in NH claimed that over 20% of primary voters had made up their minds just that day. That’s a very fluid electorate.

There Be Drama For The Progressive Grand Mama

Watch: Donald Trump OWNS A Heckler Who Said Illegal Immigrants Are The Backbone Of America

[email protected]: No distance between @HillaryClinton, Lindsey Graham, and @marcorubio on foreign policy:

I retweeted this to my followers…

(I retweeted this one also)

CNN owes Cruz an apology … and so does Fox, with its wall-to-wall attacks http://fb.me/36pCxLOhq

Well… the big guns are officially out now for both Cruz & Trump for the preservation of a Rubio v Hillary general election.

Rubio is feeling the coming ‘Colar,’ he tells Univision

Translated from Spanish by Bing

Note: Tweetdeck provides an inline translation by Bing if selected on the ‘…’ menu for the tweet.