“Our debate process is broken,” writes Fiorina in letter to RNC. 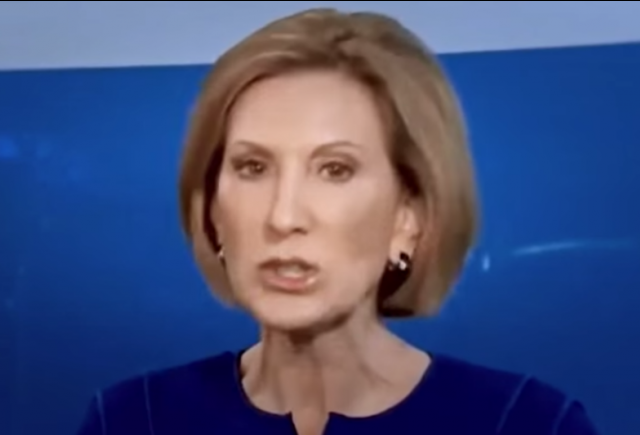 Republican presidential candidate Carly Fiorina is fighting to get on the debate stage on Saturday, the last one before the New Hampshire primary next Tuesday.

Current rules will issue invitations to the Republican candidates who finished in the top three in Monday’s Iowa caucus — that would be Sen. Ted Cruz (R-TX), Donald Trump, and Sen. Marco Rubio (R-FL) — or who rank in the top six in averages of the latest national polls, or in averages of Granite State polls. As The Hill notes, the final decision will be made on Thursday.

After Sen. Rand Paul (R-KY) and former Sen. Rick Santorum (R-PA) announced on Wednesday that they were suspending their campaigns, only Fiorina and former Gov. Jim Gilmore (R-VA) would be left on the sidelines of Saturday’s debate. Former Gov. Mike Huckabee dropped out Monday after the caucus results were reported. For the first time this election cycle, there will be no undercard debate.

Gilmore had a total of twelve supporters — yes, as in just twelve people — in the entire state of Iowa on Monday, and efforts to track down any of those twelve Gilmoreans created the most press attention he had received in months. In contrast, Fiorina has some arguments that are not without merit.

“Our debate process is broken,” begins the open letter that Fiorina sent to the Republican National Committee (RNC), who she implores “to act in the best interest of the Party that it represents,” instead of allowing the television networks “arbitrarily to decide which candidates make for the best TV.”

Fiorina points out that in 2012, all declared candidates still in the race were invited to the debates, and allowing her to participate would mean the same number of candidates (eight).

She also argues that she beat Gov. Chris Christie (R-NJ) and Gov. John Kasich (R-OH) at the Iowa caucuses, and has twice the cash-on-hand as either of them, but they were both invited to the debate.

In a conference call earlier Wednesday with media, donors, and supporters, Fiorina pointed out that she “tied with Jeb Bush in delegate count” at the Iowa caucus, even though Bush poured tens of millions of dollars more into the state. Kasich also earned one delegate.

Fiorina was able to successfully argue her way into a main stage debate back in September. Legal Insurrection reached out to the Fiorina campaign for further comment, and deputy campaign manager Sarah Isgur Flores replied that they did not have any updates yet. The Washington Examiner reported earlier that the RNC had not responded to a request for comment.

The next Republican debate, sponsored by ABC News and IJ Review, is scheduled for Saturday, at St. Anselm College in Manchester, and the New Hampshire primary will follow on Tuesday. [Disclosure: the author is also a contributor at IJ Review.]

Carly Fiorina’s Letter to the RNC regarding debate process

To the Chairman and Members of the Republican National Committee,

Our debate process is broken. Networks are making up these debate rules as they go along — not to be able to fit candidates on the stage — but arbitrarily to decide which candidates make for the best TV in their opinion. Now it is time for the RNC to act in the best interest of the Party that it represents.

In 2012, the debate stage featured 8 candidates until the Iowa Caucus and then all declared candidates still in the race were invited from that point forward, including the ABC New Hampshire debate. As of today, I will be the only candidate kept off the debate stage. To review, we beat Governors Christie and Kasich in Iowa this week when voters actually had their say. This campaign has the same number of delegates as Governors Bush and Kasich while Governor Christie has zero. We’re ahead of Dr. Carson in New Hampshire polling. We are 6th in hard dollars raised and have twice the cash on hand as either Governors Christie or Kasich. We are already on the ballot in 32 states, and there is a ground game with paid staff in 12 states. Yet, all of these candidates will be invited to the ABC debate. I will not.

There are only 8 candidates left. It’s time for the RNC to demand that media executives step aside and let voters hear from all of us.

I trust you will act appropriately.

Should Carly be permitted to participate?

Before you vote, view this video of Carly’s participation in the last undercard debate, Peak Carly:

Poll open until Midnight (Pacific Time), the night of February 4, 2016

She wields vocabulary like a thugee wields a razor. Let her on.

She is absolutely right.
Christie and Kasich should not be in the debate.

Nor should Jeb! but it will be hard to keep him out until he gets his ass kicked in Florida.

As for Carly, she should take a hint from Huckabee, Santorum, and Paul and get out while she can do so with some dignity.

I disagree that candidates should leave after losing in Iowa; I know to those of us who have been watching the process, Iowa feels like the end of the game, but for candidates everything up to now has been pre-game. This is the very beginning; a qualified candidate should have budgeted their resources successfully to weather a poor showing in the first play of the game, so to speak.

That said, I do think the Broncos should just get out right now while they can do so with some dignity.

I didn’t say she should drop out because she lost has lost Iowa. I said she should do so because she has doing badly. The only times she made it to the grown up debates she did so just barely, and only by severe manipulation of the rules by TPTB.

As for the Broncos, they should get out before Manning gets a drug test.

Come to think of it, there was so much worry last about Brady and under-inflated footballs. Why is there no worry about Manning and HGH? Even if the footballs were underinflated, it’s not a federal crime.

This may be ‘off topic’ but, in case you missed it, the Bronco defense buried Brady, deflated balls and all. The NFL is doing a full investigation of the Manning HGH accusations.

And Carly should be allowed to debate.

Why do you hate women?

Much as I admire this lady’s mind, she needs to call her campaign to a dignified halt.

I’d LOVE to see her continue to play a role in the future.

Maybe there’s a roll for her somewhere, Ambassador to someplace. Just keep her hands away from any power levers associated with H1B visas.

Dignity. Unlike Jeb! who had to beg for people to clap.

Someone should tell him that that is a big big hint.

She’s right, but not in the way she thinks.

Our debate process IS broken, because it allowed way too many loser also-rans to clog up the stage when it was pathetically obvious they had no chance at winning.

There is zero reason 7+ candidates needed to be in the last debates.

And after Iowa, it needs to be down to 4: Cruz, Trump, Rubio and Carson (the case could MAYBE be made for Paul and Bush since they did actually get a delegate each).

But everybody else has lost. I mean seriously, Fiorina, have some dignity, you had the same amount of votes as HUCKABEE.

By your reasoning, Fiorina should be in. She also got one delegate.

I enjoy her being at the debates. She handles herself amazingly well. I would much rather see the field narrowed down some more but as long as Jeb, Christie, and Kasich are in I see no problem with her staying in. Besides I would vote for her before I would vote for Trump, Rubio, Christie, Jeb, or Kasich.

The process is broken so you must change the rules to let me in.
Sounds like a Democratic argument to me.

The way Fiorina slices and dices Hillary is reason enough to have her on the debate floor so 20 million folks can hear it.

If Jeb! and Kasich, Christie and Carson are IN…..she should be IN, too.

Personally, I believe Gilmore, Christie, Jeb!, Carly, Kasich, and Carson should all drop out – but, if Jeb!, Christie, and Kasich are in the debate, she should be, too.

As of today, I will be the only candidate kept off the debate stage.

“Well, the RNC did nothing to help Carly Fiorina, the only woman on the Republican side. It looks like the Republican War on Women is real, after all.” – the DNC and MSM

Yep, if nothing more than for pragmatic reasons, she should be there. And she’s feisty. And fun to listen to.

I’m with you there, MikeInCA. A great ticket, with two highly effective individuals.

Perhaps since Ms. Fiorina will clearly not be the party’s Presidential nominee (properly not, IMO) she could be given the duty of challenging/grilling the other candidates. She’s shown to be very effective at that.

Then the strange effects from MSM “journalists” can be remove from the process.

Carly Fiorina’s presence in the debate is a no-brainer. But, then, the GOP leadership is not noted for their brains.

Carly, has a point. There are way too many ” Losers,” on that stage. This is a “media show,” and not a real Debate. If the other ” Wanta Be’s,” are there, Carly should be also. There should only be 4, to begin with at the start of the season.

The debates are horrid because of media bias. It is apparent that the media will lie, manipulate and control things so that the public won’t ever get the truth. Why the GOP puts up with having moderators so in the tank for the dems setting up the questions and conditions for the debates is beyond me.

It has been beneficial to the Republican party to point out to undecided voters that while the Democrats, the party of “diversity,” offer them the choice of an old white crook or an old white crackpot, the Republicans offer a Black doctor, a female business executive, two fellows of Hispanic ancestry and a renegade billionaire. Letting the MsM refuse to allow Carly on the stage harms that perception.

By all means include Fiorina.