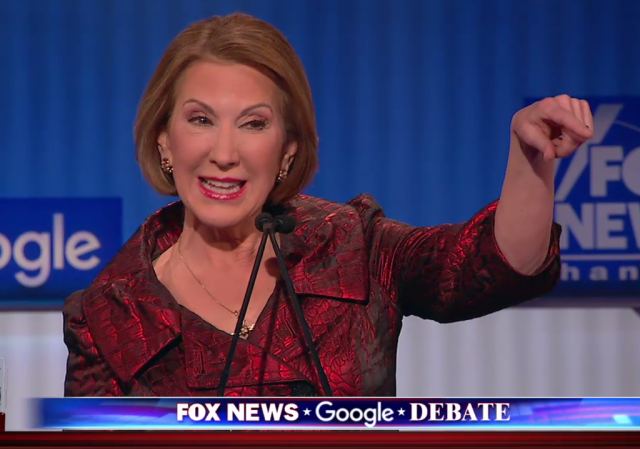 So good that Mother Jones magazine calls it an Unhinged Rant:

Here’s a quick rundown of the things Fiorina accused Clinton of:

Being a wannabe dictator: “Hillary Clinton would do anything to gain and hold onto power, anything.” That’s why she didn’t leave Bill, apparently.

Wrongly refusing to leave her husband: “If my husband did what Bill Clinton did, I would have left him long ago.” Fiorina insisted that line “wasn’t a personal attack.”

Just kind of being terrible in general: “She has not accomplished much of anything in her life.”

In case you have trouble memorizing lists (I do), Carly also released an ad reinforcing many of those points:

Put her back on the big stage, regardless of her polling.

Priceless. She’d mop the floor with any Deemocrat in a debate.

Our youngest daughter used to always watch iCarly when she was little. Every day.

Well I love to watch I♥CarlyFiorina. I could watch her every day.

For the life of me I can’t understand why she isn’t a frontrunner.

LukeHandCool (whose older daughter interviewed the star of iCarly, Miranda Cosgrove, when she rushed Luke’s daughter’s sorority at USC. Luke asked his daughter what this young TV star was like, and Luke’s daughter said she was so surprisingly down-to-earth and normal that it made Luke’s daughter feel a bit embarrassed and in awe that one of Nickelodeon’s top stars was so humble in real life. Either that or she really, really wanted to get into what is perhaps USC’s most popular sorority … among USC frat boys)

There’s a lot of time being spent squabbling over this and that candidate. Fair enough.

But what a joy to imagine each of them in a slot in Somebody’s Administration. Ted as a Supreme Court Justice, Carly as VP, Ben Carson as Surgeon General, The Donald as Press Secretary, Gov Walker, Gov Perry, Gov Christie, Sen Rubio in various roles … the list can be extended indefinitely. Except I don’t think I’d want !Yeb! in the mix…

#JMVCUSA, funny, I was thinking the same thing as I watched. But I think I’d have Trump representing the US in the UN. That would show my contempt for the UN and give them a world of hurt to have to deal with–if he stayed true to his words.

Of course, they all require Congressional approval, but I think you could get it. Either way, the worst Republican Candidate is infinitely better than the best the democrats have to offer.

Is there a best that the progressive fascists have to offer?

This fantasy, of having a big fraction of the Republican field in the cabinet, has a lot of appeal. That is because the Republican Party has worked hard to give us some good and valuable candidates.

Agree. I would like to see Cruz serve a term, or part of a term as AGUS and get some high profile convictions. Then he can step down as AGUS and be a significant upgrade to Ginsburg. If we get 1 to 4 more Kagans or Sotomayors, this country will be lost forever.

I was fully open to Carly until she joined with Trump and Cruz in the money-for-vets stunts. Veterans’ charities should never be dragged into politics, by anyone.

Oh, and 100% of the money Trump raised went to the Trump Foundation. We’ll see how much actually ends up going to veterans’ aid, since so many groups announced they wouldn’t accept money under these circumstances. If Trump’s and his Foundation’s history is any guide, not much will get to vets.

The debate without Trump was serious for a change instead of his clown show, and was the second-highest rated show in Fox News history (#1 is the first debate last fall). A shame to think of the substantive campaign we might have had without the buffoon and his thuggish supporters.

On Teump’s website there is a list of 22 charities into which the money will be deposited. It is worth a look.

Look up the meaning of the word “Will”. It means something that occurs in the future.

Are you going to ask me to define the word “is” next?

Sure, I hear what you say. But let’s compare and contrast. Carly participated in a stunt.
Boehner, McConnel, Ryan all promised to fight back against Dem lawlessness and did squat. Using your logic should I say “I was open to voting for Republicans until the Ryan budget. But now I’m going third party all the way.”
You might go that route. But for me, I would relish seeing Carly in a position of power rolling back Dem excesses.

The GOP already is a third party.