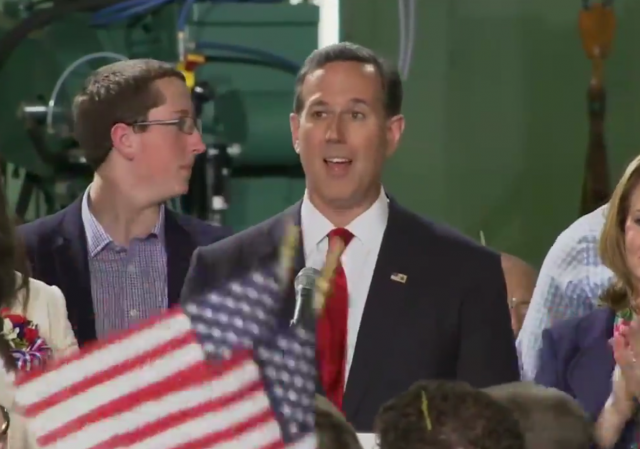 He is expected to make the announcement Wednesday night and will endorse a candidate.

Santorum won the 2012 Iowa caucuses and ended that race with the second-most number of delegates to eventually GOP nominee Mitt Romney. But he was unable to capture any momentum this year, despite extensive barnstorming efforts in Iowa.

Santorum faced a drastically different landscape this year than he did in 2012. A crowded field of 17 Republicans and lackluster early polling kept him off the main debate stage for each of the GOP debates. He also faced competition for the hearts evangelical voters, particularly from Ted Cruz.

His retail politics were also no match for the media-centric, playbook-defying campaign of Donald Trump, the brash billionaire who left little room for candidates to win a moment in the spotlight.

UPDATE (by WAJ): On the Greta show Santorum just endorsed Marco Rubio. Will post the clip when available.

Even flies have a greater mass than some of these candidates. Dropping like feathers?

And flies are less annoying.

BYE BYE Bible thumpers. Hope Jeb! is up next. I guess his “managers” want to suck up as much of that “free” campaign cash while they can.

I don’t care that he’s a bible-thumper – a candidate with some humility (goyim included) would be a big improvement over what we have now, or what the dems have to offer. Santorum’s problem is that he’s a name out of the past, like Jeb!. Time for some fresh faces.

3 to 1 he “endorses” the new uniparty candidate Rubio.

A frothy mixture
No recipe for success
So long, man on dog

I admit to being pleased to see Santorum leave the race, but I’m not pleased at the cat calls from LI and elsewhere following him out the door. Santorum is a good man. You know, as in one of the good guys, not the bad guys?

I wish him and his family well.

He pointlessly stuck around for months after it was crystal clear he was nowhere near the top 8, never mind having a chance to win.

If he’d dropped out 2-3 months ago nobody would have commented. The fact that he stuck around so long wasting money on a vanity run means people are rightly going to slam him for it.

I mean, seriously, he literally never cracked 3% the entire campaign. A pretty large number of people thought he already HAD dropped out.

You have bought into the media picking candidates. The media decided on the debate threshhold. In any sane universe, a man who won 10 primaries in the previous election would have been on the main stage.

But the media hate real America. Screw them. Screw the useful idiots that accept the media criteria. Thank goodness Donald Trump sees through it.

They’re all good men (and women), but there are too many of them, and many without clear differences. Seventeen candidates was just ridiculous. Did the 17th guy really jump into the race thinking he stood a chance? He’s the one the party has been waiting for? Santorum is a good man and would make a fine president, but his chance has passed and he should have known that.

“Dropping like flies”. I think you could use a better metaphor then that — Ok technically it is not a metaphor it is a simile.

How about we have a little contest.
My entry would be “running away like Obama appointees facing a Congressional subpoena” for now. If I think of something better I will

Hopefully, this signals a strategic withdrawal, that will see the candidates join the administration in their respective positions of strength.

@Greta tweeted earlier in the day that Santorum would be on her show tonight for two special announcements.

What makes sense is announcing suspension of his campaign and an endorsement of a fellow candidate… likely to be Trump, but who knows.

I would be really surprised if he endorsed Trump. Given who is left in race I’m not sure who if anyone he might endorse.

Britt says “I would be really surprised if he endorsed Trump.”

Rags might benefit from a review of the following:

“Given who is left in race I’m not sure who if anyone he might endorse.”

I read better than you.

I LOVE that I live in your lil’ goosestepping mind rent free this way…!!!

So that is no response to your obvious lie and diversion to Curle correctly pointing out the utter stupidity and lies in your post above. Not unusual for you Rags. Run and hide is your other defense when caught lying or just posting stupid nonsense.

As to what you love I’m sure you love many things but honesty, maturity, and civility just aren’t among them.

If you would stop following me around like a retarded puppy dog I wouldn’t have occassion to ever think about you.

Well, looks like I’ll be skipping her show (again) tonight. Isn’t there any *consequential* news to cover?

With Huckabee and O’Malley out I’ve lost all hope of getting some good guitar riffs this campaign cycle.

I liked him better when he played Michael Scott in The Office. He’s a much better actor than politician.

The Cruz unlikability factor strikes again. Cruz should have been natural object of Santorum’s endorsement as both strong social conservatives. I guess Santorum either can’t stand Cruz like everyone else who gets to know him or Santorum doesn’t trust him to be an authentic social conservative and thinks Cruz is just a will say anything to get elected phony.

You guess wrong. But you do most everything wrong. It seems to be organic with you.

So you think Santorum endorsed Rubio because he likes Cruz so much.

If I wasn’t voting for Trump I would have to vote for Rubio because there is no difference between Rubio and Cruz on issues and Rubio is by far more electable than Cruz in geberal election. Cruz is loser for sure in general election.

See, here you’re just lying for practice. Ridiculous, but that’s you all over!

Donald Trump has endorsements from a few ex-office holders, as well as from Jerry Falwell’s son, but none from any currently serving Senator, Congressman, or Governor.

Because he’s one of the most despicable people EVER in American politics.

Trump hasn’t spent the last 4 years working with 55 republican senators. Cruz has. Not a single one will endorse him. Trump has been endorsed by Senator Jeff Sessions on both immigration and Trade. Sessions has appeared with Trump at campaign rally in Alabama.

“Trump has been endorsed by Senator Jeff Sessions on both immigration and Trade.”

Really? That should be easy for you to link to. Liar.

Poor guy. Picked up the Romney opposition vote in 2012. Thought he actually had a constituency.

And this poll I bet PRE-DATES the T-rump tantrum. I BET that it would be even worse now.

Why did Sanctorum (my term for him) endorse Rubio? It damn sure wasn’t because he was impressed with Rubio as a Senator.

Santorum, a squared away good citizen, politics aside, doesn’t seem like the type to do it to me, but oftentimes endorsements from dropout candidates are made because the the receiver agreed to pay off the endorser’s campaign debts.