Will focus on his Senate campaign 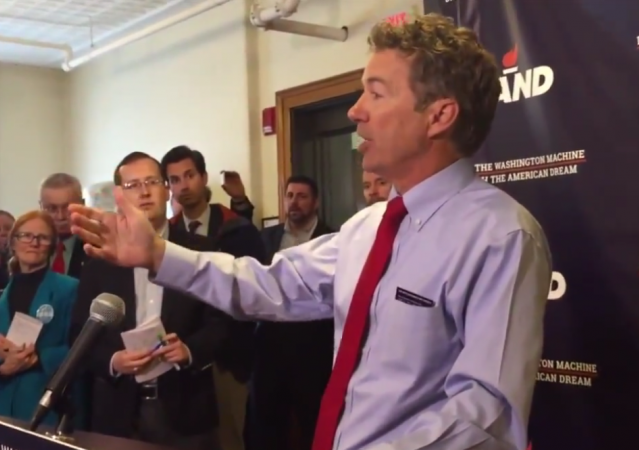 After finishing fifth in the Iowa caucus with less than 5% of the vote, Senator Rand Paul has announced that he is suspending his presidential campaign in order to focus on his Senate campaign in Kentucky.

“It’s been an incredible honor to run a principled campaign for the White House,” Paul said in the statement. “Today, I will end where I began, ready and willing to fight for the cause of Liberty.”

Paul, a Kentucky Republican, is expected to instead place his focus squarely on his Senate reelection bid, where he faces a wealthy Democrat, Lexington Mayor Jim Gray, who has the money to partially finance his campaign.

Paul finished a disappointing fifth place in Monday’s Iowa caucuses, registering just 4.5% of the vote despite placing a heavy emphasis on the state’s college towns to bring out younger voters inspired by his libertarian-minded message. He promised that night to continue his campaign.

But the Paul sources said a morning-after review made clear to Paul that there was not a viable path to winning the Republican nomination and that fund-raising was becoming extremely difficult.

It’s not clear whom Rand’s supporters will now turn to in the 2016 Republican primary, but it will be interesting to see how that plays out.

He really should not have let his father’s enemies advise him.

Every time he reached out to be more inclusive, his base people ran away in droves.

Well, at least he’s realistic. Bush, Christie, etc. are delusional to stay in, leaving you to wonder about their sanity…or maybe not…

If Barry can get one, why not The Donald?

Being nominated for a Nobel Peace Prize is meaningless; it takes almost nothing to be nominated.

Even winning the prize doesn’t mean much any more, but at least it does take some doing to win. Being nominated doesn’t.

Campaign for president, campaign for the senate…….it would be nice if he would focus on the job he was elected to do.

Oh this is halarious!!! Legal Isurrection (the Professor himself, I assume) retweeted that Nobel Peace Prize tweet…

With an outstanding RT caption:

I have a great deal of respect for Rand. Hope he spends many, many years serving KY in the Senate.

Didn’t and don’t want him for President but a good voice for Congress to challenge Political Orthodoxy.

A good man unable to build a national coalition. Agree with DaMav – he’s a good thing for the Senate.

I just saw something that Santorum is out too.

This story has not merely buried the lede but omitted it entirely. The big change that caused this decision is simple: Sen. Paul now has a challenger. Until he had one he didn’t have to worry about reelection, and had time to campaign for the presidency. Now that he’s being challeged at home it makes sense that he has to stay home and fight for his seat.

Rand, Huckabee, Santorum all out.

Gilmore still thinks he has a shot though.

Proud of my former Governor. He’s a trooper.