They seem angrier that a socialist supports Israel. 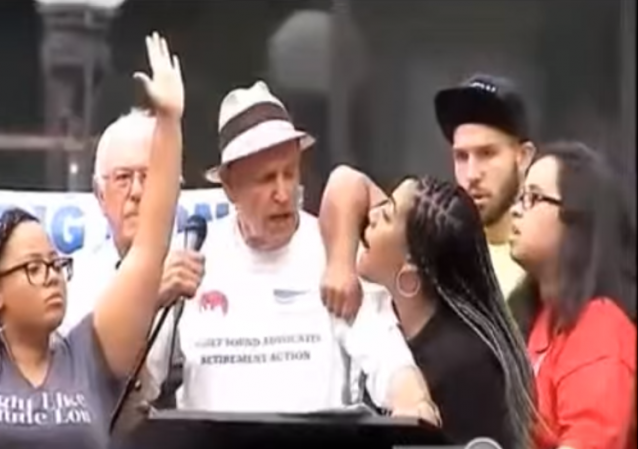 Bernie Sanders is Jewish and worked on a kibbutz in Israel in the 1960s.

Bernie supports Israel’s right to exist, though he’s decidedly more into the “balanced” approach compared to other candidates, and has questionable Middle East advisors.

Bernie doesn’t wear either his Judaism or Zionism on his sleeve, unlike his socialism. To the contrary, when given the perfect opportunity at the last Democratic PBS debate Thursday night, February, 2016. Gwen Ifill asked Bernie if his candidacy would “thwart” history by denying the opportunity for Hillary to become the first female president.

It was a perfect opportunity for Bernie to make the point that he also would be a first — the first Jewish president. But Bernie didn’t go there, instead he danced around the issue and said that it would be historic for “someone of my background and views” to be president:

Why the hesitation? Part of it might be that Bernie just doesn’t embrace his religion and Zionism as much as he embraces his socialism. Or maybe he thinks it’s not enough of a “first” to compete with the potential “first” of a woman president.

Or maybe because Bernie knows that some of the most vocal anti-Israel leftists have a problem with his Zionism, and it’s not a battle he wants to fight right now because it might fracture his progressive coalition against Hillary.

Bernie must know about this potential problem on his far-left flank. From the get-go, Bernie has been targeted by far-left wing and anti-Zionist websites. In early May 2015, the anti-Zionist Mondoweiss website wrote:

Sanders is also getting points for opposing the Iraq War, which Hillary Clinton supported, and he supports the Iran deal. But I’ve seen no one apart from Juan Cole, in this excellent summary of Sanders’s Middle East views, point out his yeoman defense of Israel during its assault on Gaza last summer. In July Sanders formed part of the “unanimous consent” to a resolution to support Israel in its attack, a resolution Salon’s David Palumbo-Liu said at the time “does more than confirm U.S. Senate support for Israel. It pushes that statement beyond any rational or ethical or moral framework imaginable.”

In a famous encounter at a town hall meeting in Vermont near the end of the onslaught– video below–, Sanders got so angry at pro-Palestinian constituents who were obviously deeply upset by an assault that had killed 500 Palestinian children that he told them to “shut up.”

Similarly, recently a write at the anti-Israel Middle East Monitor framed the left-wing objection to Sanders as progressivism being incompatible with Zionism, Is Bernie Sanders a civil rights campaigner or a loyal supporter of Israel?

But it hasn’t only attacks from authors. Remember the woman who, in early August 2015, took over the stage at a Bernie rally in Seattle, then shouted at the top of her lungs just inches from the face of the person introducing Bernie?

It was a defining moment in the campaign, and it signaled the aggressive tactics that Black Lives Matter protesters would take at other events. While Hillary Clinton and some Republican candidates faced hecklers or mild disruption, that initial Bernie event was the most aggressive.

The woman who yelled at Bernie and took over the stage was anti-Israel Block The Boat activist Mara Willaford.

@JasonSamfield @AP Mara Jacqueline Willaford, only with #BlocktheBoat, she was Palestinian and know she's Black, Hmmm? How'd you catch that?

Protest leaders said they will continue to try to disrupt the Zim Chicago unloading while it is in Tacoma.

“This is a deliberate protest, not a symbolic protest,” said Mara Willaford of Seattle. “We will be here until the boat leaves. We don’t know how long that will be, but we’ll be here as long as it takes.”

Willaford said she and other protestors are trying to pressure Israel to end its military action in Gaza. “We want them to end the siege in Gaza and, in particular, allow them to open up and let Gaza use its port.”

Protestors chanted “Occupation is a crime,” and “We are the people. We want justice for all Palestine.”

In this video posted by the Mike Report, Willaford is chanting into the bullhorn as part of Block the Boat protest in Seattle:

In this video, also by the Mike Report, Willaford is at the head of the line of protesters, leading the chant:

Now controversial hate-tweeting Professor Steven Salaita has joined the anti-Bernie campaign with a column in Salon.com stating that he could not vote for Bernie because of Bernie’s support for Israel. (As an aside, Salon has become a home to anti-Israel columnists such as Salaita, Stanford Prof. David Palumbo-Liu, and new Salon staff reporter Benjamin Norton.)

Salaita writes, I won’t vote for Bernie Sanders: His feeble position on Israel is a serious progressive problem:

Bernie Sanders has run a smart and spirited campaign. Even if he eventually loses the Democratic primary, his rise from virtually nowhere to threaten Hillary Clinton from the left offers much-needed optimism in a time of dismal inequality. His invective against Wall Street is accurate and often courageous. He is the rare candidate who doesn’t traffic in patriotic or religious platitudes.

But I won’t be voting for him.

Sanders has long supported Israeli colonization, including the worst elements of its military occupation. I’ve had numerous arguments with friends about the extent and character of that support. Is it fair to call Sanders an adamant Zionist? Is he a Zionist at all? Does it even matter? How bad is he, really, in the spectrum of U.S. politics, where kowtowing to Israel has long been a prerequisite for the presidency?

There is an electoral angle here that Bernie could, but almost certainly won’t pursue. Hillary has begun to point out that she is more pro-Israel than Bernie. Even in the Democratic Party that’s a winning position.

Having websites like Mondoweiss and activists like Salaita against him could be a way of Bernie showing his pro-Israel cred. And it wouldn’t cost him many votes at the ballot box:

Uh oh. Bernie Sanders has lost the support of Steven Salaita and, with it, the voters of crucial Beirut County https://t.co/pnr6pVvSdh

The paid Muslim agitators are hijacking as many of the protest movements as they can. They then try to escalate things hoping for bodies.

Bernie has lived by the sword of lying, PC, Collectivist hate.

Let him die by that same sword (metaphorically speaking…).