Walking While Jewish in a Berlin refugee center

Walking While Jewish in a Berlin refugee center

Swastikas and a map of “Palestine” showing no Israel. 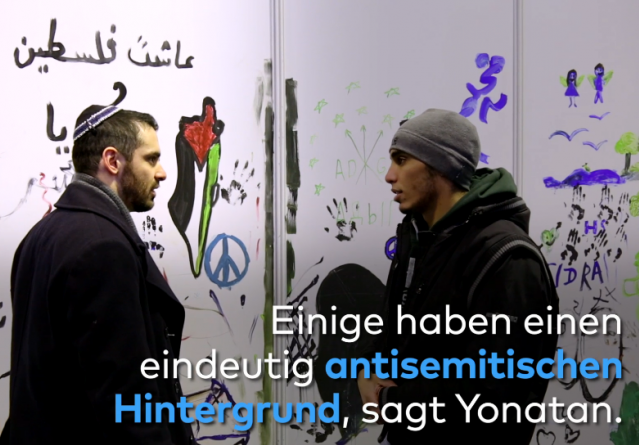 With anti-Semitism rising in Germany, and even Angela Merkel admitting that there was a problem with migrants from certain countries (she would not name them), what would it be like to be Walking While Jewish in a German refugee center?

The German Die Welt newspaper published “an experiment” where an Israeli Orthodox Jew did just that.

A video showing a Jewish man’s experience in a migrant center in Berlin was released yesterday by German newspaper Die Welt.

The man, who has experienced several antisemitic attacks within the last six months in Germany, encountered varying reactions within the center. While some expressed a wish for peace in Europe and empathy with Jews as another minority group, others were more hateful. One woman turned away in disgust on hearing he was Israeli. A boy said that all Jews should leave the Middle-East. The Jewish man also told the Jerusalem Post that he heard a group of men whispering “Jew” on seeing him but, when he confronted them, they assured him that he was mistaken.

There were also several instances of prominent, antisemitic graffiti found on the walls of the center: a swastika, a Star of David with the number 666 written below it, and an image of Israel entirely covered in the Palestinian Authority flag.

Having ignored warnings for months, German Chancellor Angela Merkel said on Saturday that “Antisemitism is more widespread than we imagined. And that is why we must act intensively against it,” adding, “We must focus our efforts particularly among young people from countries where hatred of Israel and Jews is widespread.” In addition to antisemitism emanating from recent arrivals to Germany, there has been a marked increase in incidents in the country.

In one of the long corridors separating hangars that serve as living areas, the visiting Israeli came across anti-Semitic graffiti scrawled across the walls. According to the report, the graffiti included red swastikas, Stars of David accompanied by the satanically-affiliated number 666, and maps of Israel in the colors of the Palestinian flag.

Die Welt cited Shai as linking the graffiti to refugees of Palestinian background.

With his traditional Jewish yarmulke visible, Shai was reportedly met initially by the inhabitants with a mix of refugee children proudly displaying their German language skills and grown men ominously whispering “Jew.”

When he confronted those hissing under their breath, they men assured Shai that he was mistaken and that they had not said anything.

Shai met other refugees who expressed consternation toward the Jew from Tel Aviv. However, he encountered others who responded to him with criticism of the Israeli government, but no ill-will toward the country’s people.

Shai approached a pair of university students from Baghdad, who apparently had never met a Jew before, asking them what they learned about Israel in their homeland.

Yet in a more hostile encounter, Die Welt reported that one young refugee boy had menacingly gestured and told Shai “the Jews must get out of the country.”

That the graffiti on the walls was not only swastikas but also a map of “Palestine” showing no Israel is an another ominous sign for Jews in Europe.

Stupid question but why did Europe let in so many muslims in the first place? I understand their sociopolitical predicament now (and I have limited sympathy for it) but what were they thinking when they were getting to this point?

I’d argue it’s a good question. Like many cultural changes, it’s been a process, via outgrowths of colonialism, economics (e.g. changes in immigration policy after recessions), labor needs, demographics (e.g. population growth rates in Europe/EU without immigration), and others. You can get a fairly comprehensive summary in less than 10 minutes below:

and read the 8 paragraphs in Section 3.0 here:

“3. Factors affecting the population growth of muslims in europe
The occurrence of two world wars within Europe, loss of manpower, the onset of post-war reconstruction period, a shortage of labor, and the population of Muslim immigrants in search of jobs caused the attraction of immigrants from other European countries mainly Muslims.”

Why print this article in English and post the video with no English subtitles?

They should’ve imported Mexicans instead of Muslims.

Sounds like he got a better reception than in many US college campuses !