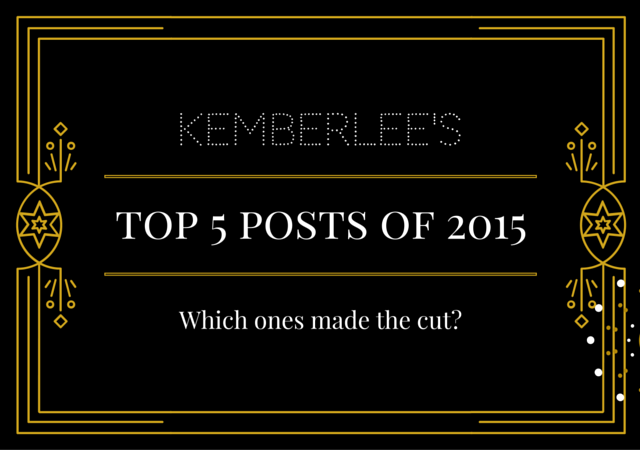 When Professor Jacobson suggested I put together a “Top 5” post, I thought it would be easy peasy. I was wrong.

2015 was a wild year and I wrote a lot of things. Picking a few favorites our of 40-some-odd pages of posts though? That was no easy task. And what posts should be included in the list? Posts I enjoyed writing? Subjects I found compelling? Stories I just liked? Posts y’all liked? Featured images I found humorous? So.many.questions. Questions that became a bit more difficult to answer after a few mimosas.

I settled on a few that I liked for any number of the above-listed reasons. I’m sure I could’ve included a few more, but I reiterate — mimosas. And maybe a bloody mary or three.

Without further ado, My Top 5 Posts of 2015 in no particular order:

1. That time President Obama forgot all about that whole Barbary Corsairs War thing

I love a good, “ORLY” post, especially when American history or media antics are involved. I was legitimately embarrassed for President Obama while writing this one. Annoyed and embarrassed. 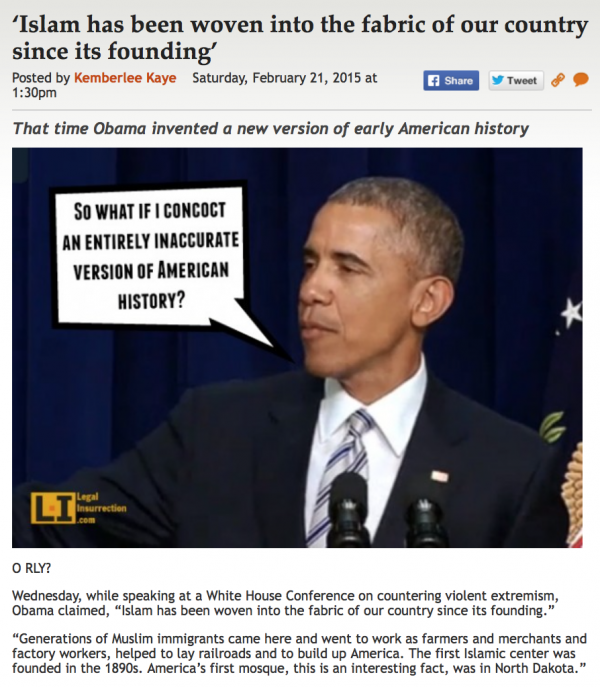 2. Calling out agenda vs. facts

Andrew Breitbart (rest his soul) was quite the influence on me when I was a baby blogger. His advice, persona, and character remain with me and I imagine they always will. Andrew encouraged me to begin blogging. He told me to, “tell my story.” He encouraged me to find and befriend fellow Texan, Brandon Darby, (who is still one of my best pals), and was the reason I ended up working with James O’Keefe. For those reasons and many others I don’t take posts like this one lightly.

One of the things I appreciate most about Legal Insurrection is that regardless of the agendas seeking to sway them, facts will always be presented as such. Even if those facts are inconvenient to the narrative. This was one of those occasions where misinformation coming from the right required correction. There was much wailing and gnashing of teeth, but as Andrew used to say, “truth isn’t mean, it’s just truth.” 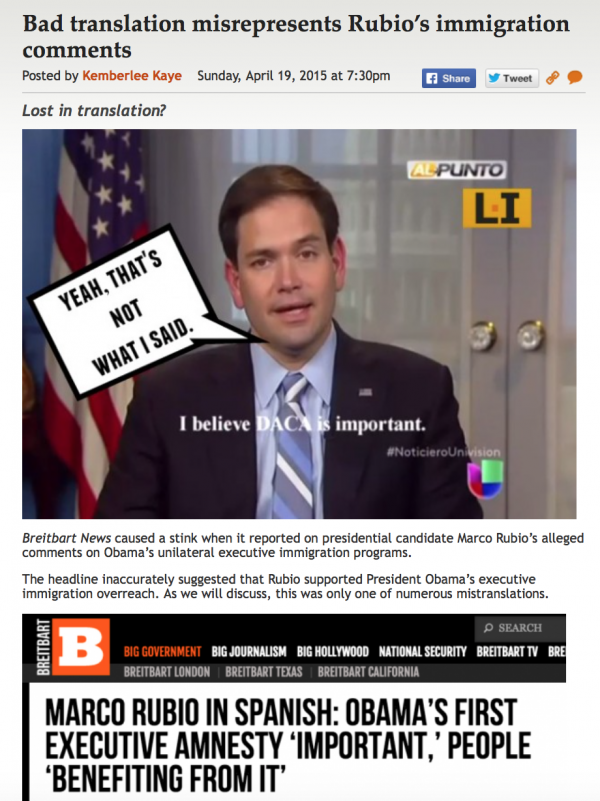 3.That time the government ruined everything, even soap

I came across this nefarious Democratic-driven bill while shopping for goats milk soap. Naturally, I had to blog about it. Perfectly illustrates of why the government is terrible. Also, who knew Big Cosmetic was a lobby to be reckoned with? 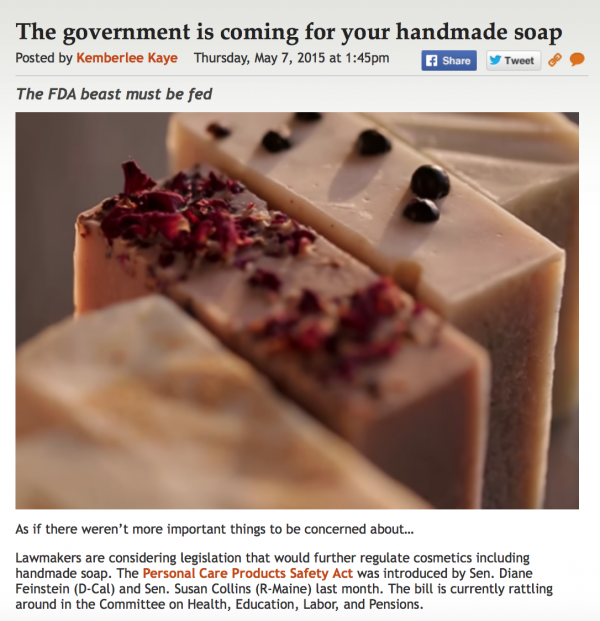 4. One of the many times I rebelled against the overly-politicized life

Got a lot of hate for this one and I’m not the least bit sorry. As I wrote:

Objectively Mrs. Obama’s workout video was just that — an informative workout video. Void of political message or any other evil left-wing plot to undermine the Republic, thousands flocked to mock the First Lady’s quite strenuous workout regimen.

The compulsion to vomit vitriol on anything bearing the “Obama” name is unfortunate. For everything the Obama’s are and are not as leaders of the (once) free world, they remain as human and “like us” as the next family. Life is far too short to view everything through the political lens, especially exercise. 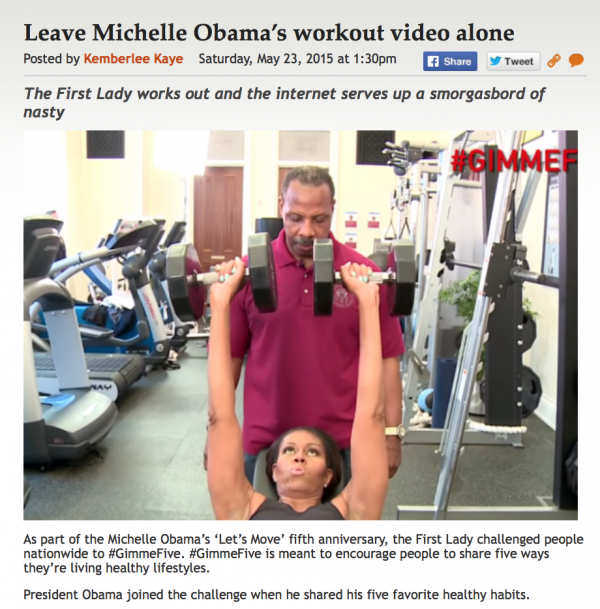 Ah yes, Marie Harf. She was (is?) gaffetastic to the max. Suggesting that giving ISIS jihadis jobs would distract them from their goal of annihilating infidels was one of my favorite Harfings.

But the real tragedy is that she had the nerve to wear glasses quite similar to those I wear while Harfing all over national television. Way to be a pox on the fashionably framed. 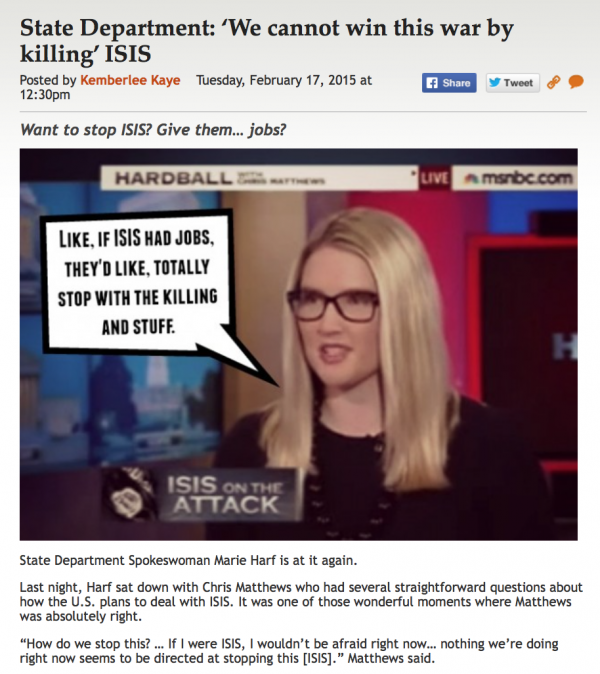 Thanks to each and every one of you for making 2015 one lovely year here at Legal Insurrection. Onward to 2016.

People forget that Obozo went first to a Muslim Madrassa before he went to American schools. He learned the Muslim version of history. Muslims have a massive inferiority complex, and like the Russians in old jokes, claim to have done and/or invented everything. It’s why he makes such a big deal out of the Crusades, but totally ignore the Muslim conquests, which the Crusades were an answer too.

Muslims don’t have an inferiority complex. They think that they are better than everyone else because of Islam. They think that they need to conquer the whole world for Islam because that is what Muhammad commanded. They think that Islam and Sharia law should be established as a tyranny throughout the world. Islam is pretty much identical to Nazism, Communism and Progressive fascism. The only significant difference is they shroud their tyranny with a religion.

Tough choices. If Harf hadn’t been replaced, she would be the top story – and likely have given us several more howlers. Her main purpose in life seems to have been to convince us that Jen Psakis isn’t the dumbest person alive.

The Rubio fiasco was an early indicator that Breitbart.com lacked the dedication to truth of its namesake.

It is worth mentioning that Obama not only rewrote American history to favor muslims, he also did it to world history with his bastardized account of the Crusades, which were always a response to muslim conquest and atrocities.

You’re an Amnesty suckup, Rubio tool, submission piddling lapdog for the GOPe, and a major blemish on an otherwise good blog.
Examples:
Insisting we not talk about Amnesty
Trashing non-Establishment campaigns
Effusively praising Rubio repeatedly
Praising Ryan for standing up for islamic immigration vs Trump

Nothing personal. Have a happy new year.