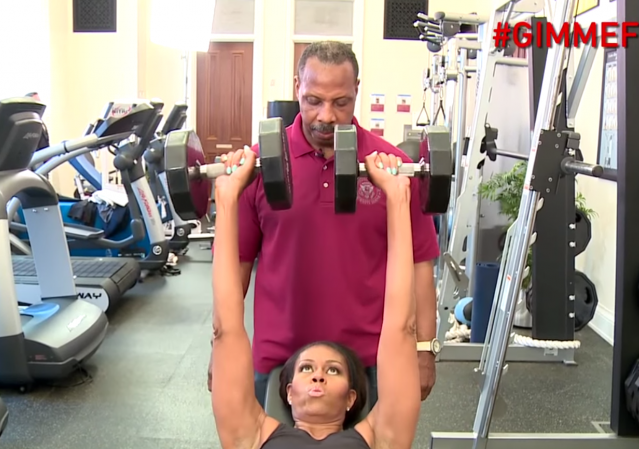 President Obama joined the challenge when he shared his five favorite healthy habits.

And so the First Lady responded to the President’s challenge to “#GimmeFive FLOTUS-style.” With the help of her personal trainer, Cornell McClellan, Mrs. Obama jumps rope, lifts weights, and beats the hell out of a punching bag in the White House gym.

Both videos are fun to watch, informative, and well done — particularly the First Lady’s. Considering more than one third of all American adults are obese, encouraging Americans to live healthier and exemplifying a fit, balanced lifestyle is a worthwhile cause.

#GimmeFive FLOTUS-Style has been bouncing around the internet since it debuted late Tuesday evening. Troubling though is the way the video has been presented by some outlets.

“Watch Michelle take the ‘lady’ out of first lady” wrote one site. “GROSS” lead the headline in another. The comments were no better and often alleged the First Lady maintained a certain gender ambiguity, though not nearly so delicately.

Objectively Mrs. Obama’s workout video was just that — an informative workout video. Void of political message or any other evil left-wing plot to undermine the Republic, thousands flocked to mock the First Lady’s quite strenuous workout regimen.

The compulsion to vomit vitriol on anything bearing the “Obama” name is unfortunate. For everything the Obama’s are and are not as leaders of the (once) free world, they remain as human and “like us” as the next family. Life is far too short to view everything through the political lens, especially exercise.

IF that is water Biden is drinking and not vodka, it’s the first he’s had without whiskey in it for years…decades…!!!

Am I safe to assume that the comment section for this post is being monitored by the NSA and Homeland security under the Patriot Act?

Barack Hussein Obama and Michelle LaVaugn Robinson-Obama “…remain as human and “like us” as the next family.”

What. The. Fark!?
Puh-leaze.
Get outta town with that disingenuous nonsense.

Yes, I agree, that was a nauseating comment, and completely untrue.

When I think of Manchelle and her mammy living in the WH, I think of Linda Clifford. Ladies, put on your disco dancin’ shoes and gentlemen, your shiny Qiana knit shirts. Some of you will remember this one:

Pointing out the obvious about Sasquatch is not vile, it’s the truth.

“The truth has no agenda, nor does it care for the feelings, emotions or position of those mad uncomfortable by it.”

Deserves its own emoticon. /s

You have to love her crack at the end of this campaign video.

Mechele: “This is the first time in my proud life to work out!”

Manchelle is a disgusting person, to be sure. I do agree with her about the obesity issue because it’s become a ‘captain obvious’ problem of great magnitude. Then again, this may be her own first campaign ad.

But that’s a good workout she put in for the video. It will be too strenuous for beginners, but they can aspire to it.

She should direct that the White House grocery budget be cut back from the $1000 dinners she eats and cut her travel budget from the multi-million dollar excursions she and her girls and mother take when the spirit moves her, which is quite frequently, and pare the school lunch program down to edible levels. She could use that money to create a series of beginner-through-ironman videos to distribute freely to schools and anybody who wants one, kind of like obamaphones, EBT and sec. 8. Included in the program should be k-12 P.E. teachers such that every student gets a workout every day. No federal strings or leftist agenda attached. No talking about getting down with the “shtruggle”, as she pronounces it, during the videos. Plain English. No political message.

Then I’ll take her seriously. Until then, President Kennedy she is not, and all I see is her promoting herself because the level of difficulty the video demonstrates is beyond what most fatties can do right now, today.

it’s clear who has the guns in the family…

Guns just want to have fun.

I don’t have any desire to watch her video, nor do I actually care what her workout is.

“The compulsion to vomit vitriol on anything bearing the “Obama” name is unfortunate. For everything the Obama’s are and are not as leaders of the (once) free world, they remain as human and “like us” as the next family. Life is far too short to view everything through the political lens, especially exercise.”

We don’t need to say this, and yet we on the “right” always do.

Mrs. Obama politicizes EVERYTHING. The fact that she might not have “politicized” this one single time doesn’t make her easier to take.

Well, the title of the program, which I guess this video is a part of, is called the “Give Me Five” for promoting five healthy things done in a day. Okay. But “Give me five”, and the high five and the low five all originated in black culture, mainly black music culture, and got picked up again by black sports ‘heroes’ in the 70s. It spread from there.

So, to that extent, it’s a bit political. Lots of white people, especially women, do not “five”. I’ve never seen Asians, American Indians or Hispanics do it.

So, the title of the program, although “cute”, appears to be based in yet another of her pro-black culture appeals.

My sentiments are in agreement with this quote from a comment I found on an article on Yahoo News: “We could all work out if the we could use taxpayers money to build a gym in our homes, hire someone to clean our house and take care of our kids, cook our meals and a thousand other things we have to do. So why should we admire a women who does nothing except pamper herself with our money?”

Thank you, Kemberlee. Your point is well-taken.

Not around here it’s not – just look at the comments to this post, and the evil vitriolic thumbsdowns you got.

*everything* the Obola’s do is political, to include this BS “w*rkout” video…

and it was paid for with our tax dollars, so we have every right in the world to object to it.

slime as nasty as those two earn every bit of vitriol & disdain that comes their way. if they don’t like it, they can leave public life.

After reading all these comments, and after taking some time to objectively reflect, and trying to see the other side on this; once again: ugh.

I don’t hate that commie, racist, criminal, affirmative action hermaphrodite any more than it hates me.

After watching a previous video of barrak obama working out it is clear as can be that Michelle is the man of the house….

I wonder if Mooch did double Dutch as a child.

They took money out of my paycheck, and out of the paycheck of every other working family, to produce and promote this?

I haven’t seen either the video or the “social media backlash,” I guess I’m not as “plugged in” as some of you.

But I question the sanity of anyone who thinks something like this is either a good use of the money the rest of us WORK for… or that the reason no other workout video in human history ever impacted our obesity rates was that they all just starred the wrong people, that Mrs Obama was the one we were waiting for, so THIS one is going to be, like, MAGIC.

(And anyone who dares to disagree is obviously a misogynistic racist and H8er and should just shut up……..)