Hillary attacks Bernie for holding similar views she espoused in 2008 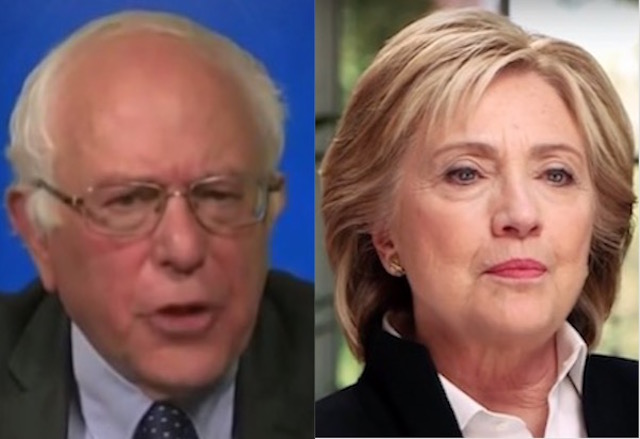 After years of claiming to be pro-Second Amendment, Hillary Clinton has changed her tune and is now attacking Bernie Sanders on his one weakness with progressives / socialists: guns.

Following a week in which the president outlined his planned gun control actions, Hillary Clinton is hitting her rival, Sen. Bernie Sanders, on his record — and Sanders and his campaign are responding in full force, portraying the former Secretary of State as a flip-flopper.

“When it really mattered, Senator Sanders voted with the gun lobby and I voted against the gun lobby,” Clinton told Chris Matthews on “Hardball” tonight.

Clinton was referring to the “Protection of Lawful Commerce in Arms Act,” legislation the Senate passed in 2005 that shielded firearms manufacturers and dealers from liability lawsuits. In 2005, Sanders voted for the legislation, while then-senators Clinton and Obama voted against it.

Clinton also noted that Sanders has voted against the Brady Bill, which mandates background checks for gun purchases, five times, and voted for the “Charleston loophole,” an amendment to the Brady bill that makes it easier to buy a gun without a completed background check.

“This is a significant difference,” Clinton told Matthews, “and it’s important that, you know, maybe it’s time for Senator Sanders to stand up and say I got this one wrong. But he hasn’t. He’s defended his vote time and again.”

Sanders is not handing this one to Clinton as he did with her email scandal; instead, he is pushing back.

Maybe Hillary Clinton should apologize for this? pic.twitter.com/We14Q7Ia5g

“Maybe Secretary Clinton should apologize for attacking the president in 2008 because he was too strong on gun control,” Sanders campaign manager Jeff Weaver said in a statement.

Watch Obama respond to Hillary’s 2008 charges, referring to her as “Annie Oakley”:

Speaking on MSNBC today, Sanders reiterated his support for the measures the President wants to implement.

“I support what the President is doing,” Sanders said. “There are a lot of candidates running in the house and the senate who may be opposed to sensible gun control legislation. I happen not to be one of them.”

Among Hillary’s targets now that she’s pro-gun control is the NRA.

Clinton is not only initiating a debate about gun control but also vowing to fight the National Rifle Association.

“I’m going to speak out against the uncontrollable use of guns in our country because I believe we can do better,” Clinton said Tuesday in Iowa City.

A few days earlier, she said in Hanover, N.H.: “We have to take on the gun lobby. . . . This is a controversial issue. I am well aware of that. But I think it is the height of irresponsibility not to talk about it.”

Interestingly (and horrifyingly), both candidates are framing much of this debate around who is best suited to “protect Obama’s legacy.”

As this feud heats up, Gabbie Giffords has announced her intention to endorse Hillary for president.

The backing of Giffords, who became a leading advocate for gun control after being shot by a would-be assassin in 2011, comes amid stepped-up efforts by the former secretary of state to portray her opponent in the Democratic primary, Vermont Sen. Bernie Sanders, as soft on guns.

“He often says, ‘Well look, I’m from Vermont and oh, it’s different, it’s not like being in New York City,'” Clinton said on CBS’s “Face the Nation” on Sunday, noting that his Vermont colleague Sen. Patrick Leahy had voted differently. “I think that the excuses and efforts by Senator Sanders to avoid responsibility for this vote — which the NRA hailed as the most important in 20 years — points up a clear difference, and it’s a difference that Democratic voters in our primary can take into account.”

It doesn’t really matter what either Hillary or Bernie have said about guns in the past; both have signaled a willingness, even an eagerness, to jump on the gun-grabber bandwagon.  And to stay there if elected.
More Sharing Options

It takes guns to take guns. Oh, the irony. Oh, the hypocrisy.

You notice that Hillary today, on Face the Nation, (where she made the same points about the protection of gun manufacturers bill and the Brady bill) was wearing very visible, very red, lipstick, and what looked like a sport jacket, although it wasn’t, but it could look like she was wearing one, and spoke with a slight tinge of a southern accent?

I thought maybe she must be in South Carolina, but John Dickerson said she was in Chappaqua, New York.

I am not sure for the reasons for all of this, plus she tried to make herself look fifteen years younger. And I think had some more womanly” mannerisms. Just a bit.

Well, Hillary can legitimately argue that there is nothing phony about her SINCE her recent revelation that she was examined at length by the aliens who abducted her in Arkansas, found she was a real woman, and then taught her how to invest in futures and real estate.

Clearly, Hillary is not of the real world as we know it.

Bernie Sanders should be the least of Hillary’s concerns these days. Now that the FBI’s probe of her email debacle has branched off into public corruption the likelihood that Justice will ignore all of it is unlikely. The genie is finally out of the bottle for the family’s criminal enterprises. If she’s still too dense to retire of her own volition now she risks losing what political capital she has left with the an Obama WH to mitigate the damage. Open probes gifted to a Republican administration are not in the Clinton’s best interests.

By executive order, are we safer today?
Did signing this thing take wicked motive away?

Now by passing this law they can’t kill anymore?
Can they only buy weapons that profit a store?

And by forcing this law are things suddenly good?
If their gun doesn’t kill us then nothing else could?

We ban them with signs, is it keeping them out?
Our guards are unarmed, they protect with a shout?

Like children demanding, are we holding our breath?
If guns are abolished they can’t hack us to death?

They’re suddenly helpless and their options are none?
They’re everything evil and we’re blaming their gun?

and voted for the “Charleston loophole,” an amendment to the Brady bill that makes it easier to buy a gun without a completed background check.

Um, what is this “Charleston loophole”? Does it exist, or is it like the so-called “gun show loophole” and “internet loophole”, which exist only in the imaginations of ignorant anti-gunners?

Seems the system screwed up with Dylann Roof when he got his gun. But the gov can’t ever be wrong, so they came up with the Charleston loophole to blame.
I’m guessing Dylann seemed sane as there are many gun shops that do refuse to sell if they have any doubt about the purchaser, sometimes even when the background check clears.

The rule currently allows federally licensed firearms dealers who have initiated a background check to sell the firearm if they have not been notified by the FBI within three business days whether or not the sale of a firearm to a certain individual would violate federal laws.
On Monday, Reuters reported that when Dylann Roof was arrested in February on a drug offense, a county jail clerk listed the wrong arresting agency in the charging document. The clerk eventually updated the report with the correct information — but only internally.

When the FBI conducted a background check for Roof’s pending purchase of the gun thought to be used in the church shooting, they could not find the arrest information in which Roof admitted to drug possession, because it had been transferred from one arresting agency to another without the FBI’s knowledge.

Because of this confusion, the FBI did not complete its background check within three business days. Roof was allowed to purchase the gun. FBI Director James Comey said last week that the agency was “sick” at the mistake.

Turns out the “Charleston loophole” is the 3-day limit that the FBI has to come back with a background check, so they can’t screw someone around forever. That’s not a “loophole” for two reasons:

1. It’s not an oversight in the law; Congress put it there on purpose. It was a key point in persuading Congress to require background checks in the first place. And IMHO it’s what makes those checks constitutional.

2. It can’t be taken advantage of, because a banned person can’t know that his check won’t come back in time.