“I have a lifetime voting record from the NRA of D minus.” 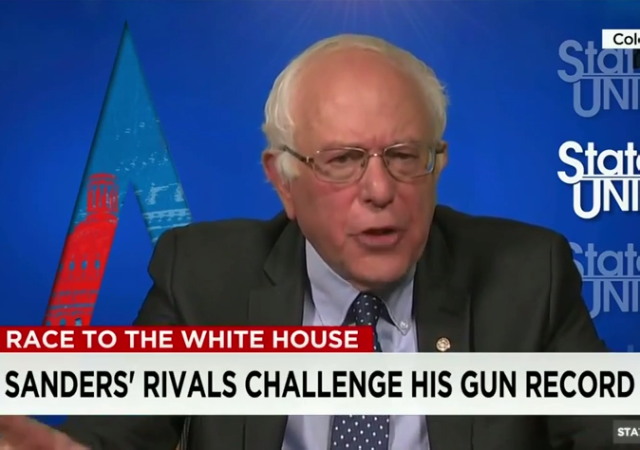 Bernie Sanders is getting hit from his left on gun control. Vermont is a very blue state, but it’s also rural and has plenty of gun owners.

Yesterday on CNN, he assured Jake Tapper and, by extension, progressive Democratic primary voters that he strongly believes in greater gun control:

Bernie Sanders says he favors gun control measures just as strongly as his Democratic presidential rivals, touting his rural-state roots as key to his chances of enacting “real, constructive” legislation.

In an interview with CNN’s Jake Tapper Sunday on “State of the Union,” the Vermont senator touted his career “D-” rating from the National Rifle Association.

Sanders also played up his differences on policy issues with Hillary Clinton and hit national Democrats for a debate calendar he said is too restrictive during the interview.

His gun control comments come in the wake of the shooting deaths of two Virginia journalists who were shot by a former coworker, as well as the execution-style killing of a Texas sheriff’s deputy.

Last week Connecticut Gov. Dannel Malloy, a Democratic surrogate for Hillary Clinton and a gun control advocate in the wake of the Newtown school shooting, highlighted Sanders’ mixed record on gun legislation — including opposing the Brady bill in the early 1990s.

My Legal Insurrection colleague Fuzzy Slippers predicted this was going to be an issue for Sanders months ago.

So did Jonathan Topaz of Politico:

Bernie Sanders is a liberal standard-bearer on nearly every single policy issue, from climate change to taxation to financial regulation. But there’s one notable exception – guns.

With President Barack Obama and Hillary Clinton calling for a gut check on gun violence in America after the mass shooting at a historic black church in Charleston, S.C., the Vermont senator’s awkward history with the issue of gun control now seems poised to resurface.

Arguably, the independent senator from Vermont has taken a pragmatic approach – his state prides itself on a deep hunting and gun culture and has traditionally fiercely defended its lax guns laws.

But while his campaign manager says he is “very moderate” on the issue, others call him “erratic.” To wit, he has voted against the Brady Bill, voted for an assault weapons ban, voted to allow firearms on Amtrak, and voted for universal background checks — upsetting gun-control and gun-rights advocates alike.

I love it that these Collectivists are coming out of the deceptions they’ve used for decades, and showing who they really are.

Battle lines are being drawn more clearly than ever.

Totally agree… I say they’re coming out of the closet… the Lenin Closet.

After years of feigned indignation when accused of being Marxists they are openly supporting a self-avowed Socialist.

After years of bald-faced lies during campaigns (remember jug-ears saying “ummm, nobody wants to take, umm, your umm, guns away from you, umm folks”?) they are now openly fighting with each other over who will be the biggest gun grabber.

They’re openly fighting over who is the biggest supporter of murdering babies in the womb.

They’re openly fighting with each other of who wants to allow the most illegal aliens to firmly attach themselves to the government teat and openly proclaiming this is the vote-buying strategy.

Part of me sees all this and gleefully thinks the Dims are going to get absolutely slaughtered in 2016. Then the pessimist in me thinks holy-shit, what if they win on this platform. Then what?

Damn, I distinctly remember him saying that he was “strongly pro gun rights” just a couple of months ago.

Bernie … you are dead to me.

He’s just another wind vane politician; pointing in the direction he thinks the audience immediately in front of him wants him to go.

I sent this email in identical form to numerous people:

So I’m asking people to tone it down and to express viewpoints without name calling. Whatever has happened has happened, and I’m not interested in determining who started it.

From this point forward, comments will be deleted, with blocking accounts a last option.

Perhaps he should talk more and give the folks back home in Vermont reason to never vote for him again.