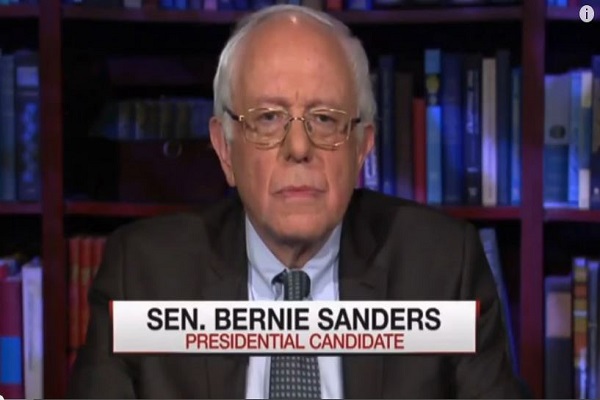 Self-described socialist and Democratic presidential candidate Bernie Sanders has a record of being remarkably supportive of the Second Amendment.

(Remarkable because he’s a favorite among progressives.)

Considering the leftward movement of the Democratic party and their avid support for all sorts of gun control, this could be a potential problem for Sanders.

In the wake of the Charleston shootings, Sanders was asked about gun control, and despite the president’s latest push, he was very cautious in his response.  CNN reports:

Two days after a white man walked into a historically black church in Charleston, South Carolina, and killed nine people, the Vermont senator and presidential candidate took a cautious approach on gun control Friday when speaking with reporters after an event in Las Vegas.

“I think the people of Vermont understand that guns in Vermont are different than guns in Chicago or guns in Los Angeles,” Sanders said, telling the assembled journalists that he thinks “it is wrong” when people are “in some cases suicidal and in some cases homicidal” are “still being able to purchase guns.”

Sanders, saying his home state of Vermont has “zero gun control,” acknowledged that different parts of the country have different outlooks on guns.

When CNN tried to follow up with Sanders about how he would handle guns differently than President Barack Obama, the independent senator rejected the question.

“I will talk about guns at some length,” he said, “but not right now.”

Vermont loves their guns, as do the majority of Americans, and Sanders’ record on gun control, while mixed, has often been quite strong.  Hot Air reports:

If Sanders has a weak spot in his armor in terms of pleasing his liberal base, it’s the gun question. Given his many other socialist positions that might come as a surprise, but Sanders’ own voting record on Second Amendment rights is shockingly moderate, or at least it was until quite recently. In 2009 he voted to allow guns in checked baggage on Amtrak trains. Two years before that he voted to prohibit funding for international organizations and agreements that would restrict US citizens’ gun rights. And in 2005 he voted for a ban on nuisance lawsuits against gun manufacturers. He currently has an “F” rating with the NRA, but in years past it has been higher. (Though never a full A rating.)

His current “F” rating with the NRA is probably due to his support for a variety of gun control attempts, including the gun control legislation that was pushed after Sandy Hook.

The progressives over at Slate are not impressed.  From the “Bernie Sanders, Gun Nut” article (tag line: “He supported the most reprehensible pro-gun legislation in recent memory”):

When Vermont Sen. Bernie Sanders jumped into the 2016 presidential race, he was widely hailed as a far-left socialist who would appeal to the liberal wing of the Democratic Party. A liberal challenge to Hillary Clinton, said Politico. True progressives’ liberal alternative, trumpeted FiveThirtyEight. But before liberal Democrats flock to Sanders, they should remember that the Vermont senator stands firmly to Clinton’s right on one issue of overwhelming importance to the Democratic base: gun control. During his time in Congress, Sanders opposed several moderate gun control bills. He also supported the most odious NRA–backed law in recent memory—one that may block Sandy Hook families from winning a lawsuit against the manufacturer of the gun used to massacre their children.

Watch him on MSNBC (if you simply can’t abide listening to Chris Hayes, click to :17):

The only thing Slate is interested in is minimizing the number of votes Sanders takes away from Clinton. They are bright enough to recognize the Ross Perot* phenomena and the problems that might cause democrats.

*Soon to be renamed the Donald Trump phenomena.

Anchovy, I suggest you and I switch party lines and vote for Sanders in the primaries.

He looks really weird with his hair combed.

I went to the range with my wife yesterday and it was over-packed with gun toting nut jobs! I felt very safe, however.

“I think the people of Vermont understand that guns in Vermont are different than guns in Chicago or guns in Los Angeles,”

I’ve moved my guns coast-to-coast three times, passing through as many as 16 different states. I didn’t notice any change in them as they moved from one State to another! Something else must be responsible for the problems some places have with guns, because the guns appear to actually remain the same, no matter what State they happen to be in.

What a gutless old Stalinist…

We know what he’ll say when he finally gets around to saying it. There’s not a lot of flexibility in Socialist doctrine; he must follow the Party line, there is no other.

Blaming a gun for murder is like blaming a penis for rape. Or a womb for abortion. Well, a womb may become a hostile environment, but it is not an intrinsic quality, and it is the exception, a la firearms.

There’s an ominously familiar ring to “you will have to elect me to find out my stance on guns….”