The Bad News: The lunatic grievance culture is institutionalized. 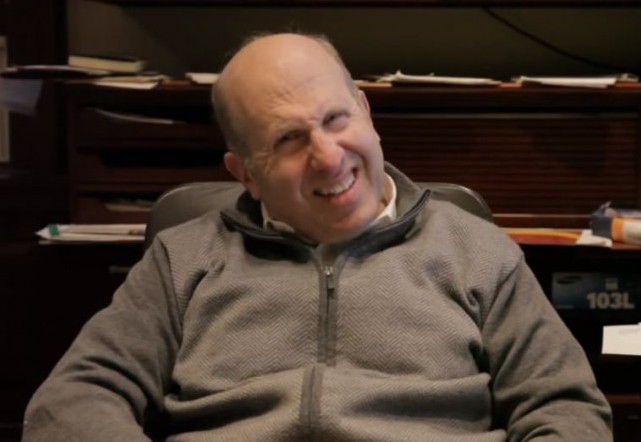 Scrolling through our Oberlin College tag presents a very sorry recent history of the campus.

The Great Oberlin College Racism Hoax of 2013 was not used an opportunity to examine the campus grievance culture, but rather, as an excuse to to advance “even more extreme policies”. A student wrote to me at the time:

I’d like to personally thank you for your coverage of the Oberlin hate hoax. Many students… have been following your site and are glad that somebody is helping to get the word out about the Oberlin administration’s response.

The Daily Caller story just grazes the surface of what really happened. The administration didn’t just allow students to live in fear, they actually used that fear to get students to push for even more extreme policies on campus. Many students formed into “working groups” to propose solutions for “institutional change”, nearly all of which have been approved by the administration and are being enacted. 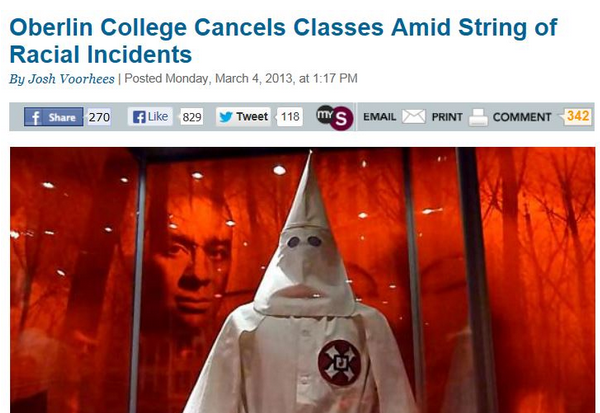 An alumnus also contacted me:

I am an Oberlin College graduate in Chemistry…. I am still very active in science program management and know many people in my field, including faculty at Oberlin.

Your detailed article on the Oberlin racism hoax is very troubling to me. The actions taken by the administration over the past six months seriously damage the reputation of the College in the outside world. More important, however, is the internal damage that is ongoing at the College. The plans for re-education of faculty in the Natural Sciences and the Conservatory are of grave concern. Both the science departments and the Conservatory have national reputations for the quality of the faculty and the education and post-graduation accomplishments of students. The full implementation of the proposed plans would make it extremely difficult for faculty in these areas to continue to provide a meaningful education.

The Alumni Office sent a short email on August 24, copied at the end of this message. [My note: It’s the same statement as described here.] It does not admit to any responsibility on the part of the President and other officials for what happened. This is all that we have received from Oberlin to this point.

Please keep reporting on new information about the situation.

Given the institutionalization of the grievance culture, it came as no surprise that two years later, in April 2015, Oberlin Radical Feminists Freaked Out at Christina Hoff Sommers, demanding safe spaces and warning of triggering: 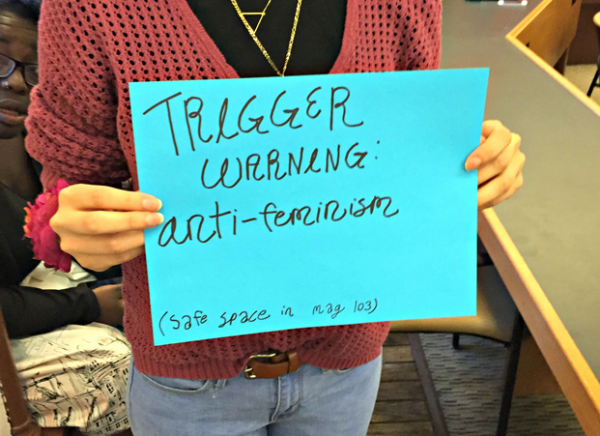 The recent 14-page List of Demands, together with the protests regarding “cultural appropriation” in the dining hall food preparation seemed to take the past conflicts into grievance supernova-land:

A petition protesting both the quality and selection of food options served at Lord-Saunders Dining Hall began circulating on Wednesday, Nov. 18.

Students called for CDS to adhere to more traditional meals, including making fried chicken a permanent feature on the Sunday night menu and providing more vegan and vegetarian options.

“The food quality at Afrikan Heritage House has decreased dramatically,” wrote Kendra Farrakhan, College senior and one of the authors of the petition, in an email to the Review….

The petition also outlines a list of proposed meals, offering authentic food ideas, recommendations on how to properly prepare food and reduce the amount of cream used in dishes because, as stated in the petition, “Black American food doesn’t have much cream in it….

“We students are concerned about our safety,” said Gloria Lewis, College sophomore. “And so beyond that, it’s about having a safe space. So it’s not just the dining hall. It’s everything. It’s the posts on Yik Yak. It’s the micro-aggressions.”

Beyond the concerns of Afrikan Heritage House, Lewis said that she would like to see more oppression training held by faculty and staff on campus.”

Given this past, I was interested to read quotes from a variety of Oberlin alumni and students in The Atlantic, Oberlin Students and Alumni Reflect on Activism at the College. Many of the points made are similar to those made in emails to me during the 2013 racial hoax events.

This comment by a freshman, from which I got the Title of this post, seemed to sum up the situation as we have been observing it over the past three years (emphasis added):

I’m a freshman at Oberlin College. My first semester at Oberlin was interesting to say the least. I’m a liberal, politically active kid from [very liberal city]. I didn’t expect the atmosphere at Oberlin to be much different from the one I’ve been used to for the past 18 years. I was mistaken.

Not everyone at Oberlin is a lunatic. Yet the most radical students are by far the loudest so it seems like Oberlin is way more radical than it actually is….

The reason is that the radical vocal minority is quick to ostracize anyone who disagrees with them….

This is because it became abundantly clear that to critique the [14-page] petition would be racist. Any dissenters are called racists by the vocal minority which completely shuts down conversation…. If you have any specific questions for me, I would be happy to answer them. But again, I wish to remain anonymous for obvious reasons.

I do believe that “not everyone at Oberlin is a lunatic.

The problem is that the radical students, aided and abetted by faculty and administrators, are running the asylum. And the sane are afraid to speak out

The lunatic grievance culture is institutionalized.

That is in the eye of the beholder. There are a number of schools where it is now rational to assume that their graduates are not worth the effort of hiring or having any personal relationship with. Oberlin is not only on the list, it is moving up as best it can.

If one of the characteristics an employer looks for in an applicant is judgments; and a new grad has a limited demonstration of that, would it be logical to think that his selection of a college reflects his ability to judge? I would wonder why anybody with any intelligence would select Oberlin (or similar) where one receives an indoctrination by idiots rather than an education from smart people. “Not everyone at Oberlin is a lunatic” is a standard that will harm all future graduates from the once great college. Businesses cease to exist after they are no longer useful. Colleges need to do likewise. Or return to usefulness.

And where may I find that list? My grandchildren are just in the college application stage of their lives and I would like to let them in on the rankings. I presume that my alma mater, Cornell, is somewhere on there.

There are several things going on here of which you should be aware.

1) The original purpose of institutions of higher learning was to make better people. This was done through a “core curriculum in Western Civilization. The vast majority of colleges and universities have abandoned this purpose. For those of you who have attended such schools, Western Civilization consists of a mixture of the Greek philosophical tradition and the Biblical tradition. In most of the few schools which still have the core curriculum, it has been corrupted.

2) It is possible to obtain a good education in the hard sciences, although even they have become politicized and corrupted by scientism. And your grandchildren will be subjected to the corruption of the humanities, the influence of a peer group consisting mostly of young fools having no adult supervision, and an aggressive secularism.

3) The vast majority of churches have utterly failed to prepare children to be able to withstand the attacks they will face in college. The Barna group estimates that 70% to 75% of college students abandon their faith.

I have a little more time than you do since my grandson is younger. I’m hoping that the market will provide us with viable alternatives for a good technical education at a reasonable price. I believe that the vast majority of colleges and universities which have lost their purpose of making better people will never regain it. Churches will have to step up and provide that.

I am assembling a collection of resources for inoculating children against secularism and scientism. A quick example is http://crossexamined.org/ (which currently seems to be down). Another example is http://www.ligonier.org/. I highly recommend Sproul’s “Defending Your Faith” series.

I am also a Cornell alumnus. I highly suggest reading “Cornell ’69” by Donald Downs for a perfect example of what is currently happening at Yale and elsewhere.

I think that humility could cure a lot of lunacy.