American approval of Obama’s handling of health care and the economy just clocked in at 44%, which represents a three-year high in both categories. The last time Obama did this well in the polls, he had just been elected to his second term; back then, an anemic 44% still represented a significant boost over the President’s first term numbers.

Americans have not been as approving of Obama’s performance on the economy since November 2012, just after the president was re-elected to a second term. The 44% he received then was similar to the 45% right before Election Day. Both scores were major improvements from the sub-40% ratings he’d received during much of his first term — including a record low of 26% in August 2011 after contentious negotiations with Congress to raise the debt limit. Obama’s best marks on the economy — between 55% and 59% — came during his first few months in office. Over the past three years, Obama’s economic approval rating has fluctuated, reaching a low of 33% in 2014. 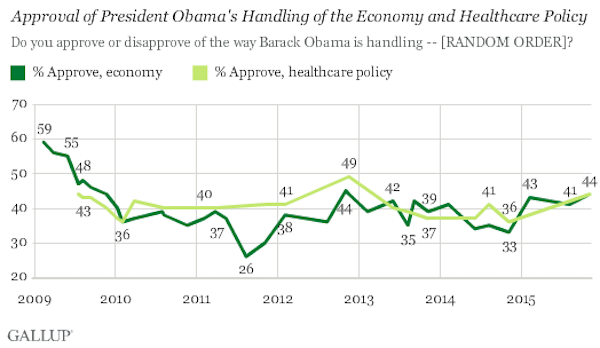 Gallup emphasizes that this poll—which included questions about ISIS and general foreign affairs—was conducted before the Friday night massacre in Paris. Only 37 and 30% of Americans expressed approval of Obama’s handling of foreign affairs and the battle against ISIS, respectively. By and large, the President hasn’t seen a substantial dip this term with regards to sentiment surrounding his foreign policy choices, but approval has dipped since his first term.

Interestingly, although the President is gaining ground with his handling of the health care system in general, most Americans disapprove of the Affordable Care Act. 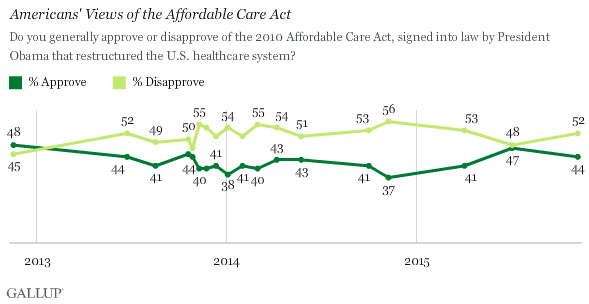 The golden nugget here? Disapproval is universal—whether we’re talking about those who struggle with the private market, or those who rely on Medicaid or other state-funded programs:

The ACA expands healthcare coverage through various mechanisms, including by expanding eligibility for Medicare and Medicaid, at least for those living in states that have chosen to cooperate in the expansion of these government-run programs. An even greater number of Americans have obtained private health insurance of some variety under the law.

But whether Americans have a private insurance plan or are using Medicaid or Medicare exclusively, they are still more likely to disapprove than approve of the law, according to aggregated data from Gallup’s 2014 and 2015 Healthcare polls. A majority of Americans with health coverage disapprove of the ACA, with 56% of Americans with private insurance plans disapproving and 50% of those using Medicaid or Medicare disapproving.

The cherry on top? Those who have no insurance at all strongly disapprove of the way Obamacare has played out—to the tune of a whopping 59%.

Well Paris Friday night and his insane comments today finished off any favor ability he had.

Well Paris Friday night and his insane comments today finished off any favorability he had.

Snapper ,I doubt it, people too stupid to notice, it is sad.

Why even report this? It’s just garbage from Gallup.

It denotes how pozzed our electorate is. As if two terms for Obama isn’t enough to already know that.

True. History will prove President Jarrett — er, Obama — to be more detrimental to the nation than even the first Civil War. Mostly because she — er, he — caused the second, more deadlier civil war, which will likely leave the union permanently split.

One more trend needs to be added. Labor participation rates, now at 62.40% are down from 64.50% before 2011. This means that 37.6% of the working age populace is not working. This percentage is not included in the phony baloney unemployment numbers.

I know at least five people unemployed. Two of them have been unemployed for years. The others were recently let go – in the Obama “Hope and Change, Don’t Give a Damn About You-I’m Important” economy.

There must be percentages laid out somewhere showing an increase of civil unrest among black communities. Chicago news reports black on black crime daily.

All of the “diversity” programs and “blah, blah, blah” in the world is worthless without a working economy, Mr. Mack Daddy Obama.

All any of these approval polls for Styrofoam Columns show is 1. The government check class is happy the check arrives & clears the bank ; &
2. All the rest of the leadership classes suck more than Styrofoam C.
I can’t argue with that even if the man’s a disaster! It ain’t so much the country that’s broken, it’s the entrenched, institutional elite classes from the C. of C. to the Universities, to the politicians & media all inbred in a leadership culture of mutual benefit.
The rest of us are incidental to their whims.

The polling sample must have been limited to his immediate family.

First, Gallop & Nobel Prizes, Don’t mean shi-. All of these Polls are bogus. There is just no truth in Gov. anymore. The Media is hiding the critical News, to trick us into not being ready to defend ourselves. The blacks & Hispanics are all being divided and not aware who they should be afraid of harming them. This Pres. is hated by at least 80 % of the population. There is so much theft in Gov. They are now the best organized GANGS in the country.