Brace Yourselves—the Media Just Made the Argument AGAINST Gun Control

Brace Yourselves—the Media Just Made the Argument AGAINST Gun Control

Can someone perform a welfare check on the DNC? 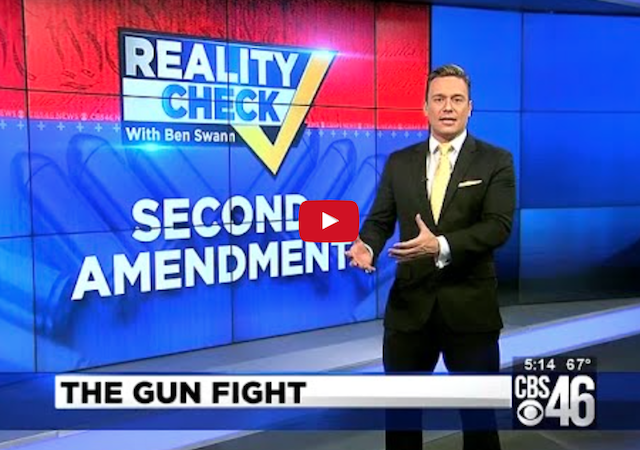 Back in October, I covered a Gallup poll that showed the majority of Americans don’t support a handgun ban. At the time, only 27% of Americans said they would support such a ban. Two studies covered by Legal Insurrection later that month revealed that the Obama Administration’s renewed push for stricter controls and limited carry actually runs contrary to the social science of controlling violence and keeping people safe.

The thing is, you’d never know it with the way the mainstream media covers issues like gun control, urban violence, and the Second Amendment.

The scope and tragedy of deaths due to gun violence aren’t just fodder for “very special episodes” of shows like Dateline—they’re chum in the water for an opportunistic media determined to forward the interests of anti-gun, pro-regulation activists. Case in point: in the wake of the Umpqua Community College shooting in Rosebud, Oregon, the New York Times unleashed an apparent expose on Sheriff John Hanlin, drawing out his past, pro-gun thought crimes and using them to turn the conversation away from mental illness and toward the Brady Campaign’s push for Hanlin’s firing—and a strict, anti-gun agenda.

We saw it coming from a mile away, but that doesn’t make it any less frustrating. We as conservatives have learned not to trust the media when it comes to reporting on guns—which is what makes this next video so refreshing.

Atlanta-area journalist Ben Swann has committed a cardinal sin: he looked directly into the camera and defended the Second Amendment.

The choicest bits, via the transcript:

This may be a very foreign concept, but the first fight over the Second Amendment wasn’t over whether the population should be armed. All the framers agreed with that. The fight was between federalists and anti-federalists over whether we would have a standing army.

The Anti-federalists―among them George Mason, Patrick Henry and Samuel Adams―were militant advocates of the inclusion of a bill of rights in the Constitution because they did not trust the power of the federal government to be restrained.

Don Kates, a scholar of the constitution and Second Amendment, points out that, “During the ratification debate, the Federalists vehemently denied that the federal government would have the power to infringe freedom of expression, religion, and other basic rights—expressly including the right to arms. In this context, Madison secured ratification by his commitment to support and to safeguard the fundamental rights that all agreed should never be infringed.”

In short, the federalists—including men like John Jay, James Madison and George Washington—wanted the Second Amendment because they believed a strong federal government would be able to control a standing army.

And the anti-federalists wanted it because it would mean every able-bodied man in America would be armed in the event that the federal government or America’s own standing army turned on its own people.

I told you it’s a hard truth. And that is what you need to know.

The Second Amendment is not about hunting, or even just defense of your own home. It was written by men who ultimately believed that governments and armies would turn on their own people.

The Second Amendment was written to guarantee that would never happen.

The primal scream you just heard came from the #gunsense activist hashtag.

I’m for hard truths. I’m for telling people what they need to know, even when it’s not politically correct, or comforting, or in step with what our emotions tell us is right.

Excellent and informative, thank you!

“We as conservatives have learned not to trust the media when it comes to reporting on guns—which is what makes this next video so refreshing.”

We as conservatives have learned not to trust the media.

It was written by men who ultimately believed that governments and armies would turn on their own people.

The Second Amendment was written to guarantee that would never happen.

Can’t you just hear the lefties: “But…but..we don’t have to worry about the government today! They are there to watch out for us, and take care of us…not attack us. The government is our friend!”

As bedwetting journalists hammer out their anti gun screeds on their laptop and send to the publisher via the internet, they tell us that the 2nd Amendment was only talking about 18th Century muzzle loaders.

This guy better brace for a letter from the IRS.

Surprising that a member of the MSM would dare to make this report! However, damned glad that he did and that the report pointed out some of the mis-truths mouthed by Socialists and other such tryants!

One more little point is that back in that day, in New England at least, many residents of a town were members of that town’s militia, perhaps exempted after a certain age. Yet, members were expected to provide a weapon, exceptions probably applied. The story behind Paul Revere’s ride and the subsequent British fighting retreat to Boston highlighted how militant, organized, and armed, those rebels were.

Yes, and today’s crooked politicians and judges are scared spitless of something like that happening again.

I never expected to see that on CBS.

I personally love smacking down the “collective right” argument. “The Second Amendment says ‘well-regulated militia’. You can own guns only if you’re a member of a government-regulated militia like the National Guard,” they say.

Then I throw back some proxies:
– “A well-balanced breakfast, being the most important meal of the day, the right to keep and eat bacon, shall not be infringed.” On what planet does that mean I can only eat bacon with breakfast (or worse yet, at a diner that serves only breakfast), and not any other meal made at home or at any other time of day?
– “A well-regulated communications network, being necessary for the free exchange of ideas, the right of the people to keep and use personal electronic devices, shall not be infringed.” How could that be interpreted to mean any electronic device I own can only be used as part of an inter-connected network (i.e. the Internet)? Although the NSA would just love that, how do you infer that from the text?
– “A well-regulated library, being necessary for the smooth dissemination of knowledge and literature, the right of the people to keep and read books, shall not be infringed.” I suppose I can only own and read books if they’re stored at a library of which I’m an active member, then?

It’s true that any argument sounds absurd when taken to an extreme, and no analogy exists that can’t be over-inflated, but it’s hard to take the “collective right” argument seriously when any analogy fails the logic test. (And yes, I have several more of these analogous statements, covering a wide range of subjects.)

“The right to keep and eat bacon, shall not be infringed.”

Should have been included but I guess the Founders couldn’t think of everything.

Basic English- “well regulated” modifies “militia,” not “the right to keep and bear arms.” Any junior high school student (at least in my day) could tell a lefty that.

It’s spelled out clearly in federal law that we also have ‘irregular’ militia and all military-aged men are members of it automatically.

Can he moderate the next debate?

“Even if we were to concede that they are correct, for the sake of argument we’ll tell them, it’s very dangerous to carry handguns, all kinds of terrible things may happen, we would still prevail because right or wrong that judgment has been made in the Constitution, the people have ratified the Second Amendment, and that policy choice has to be respected.”

“Can someone perform a welfare check on the DNC?”

That crowd wants you to WRITE a welfare check!

The Second Amendment must be protected at Freedoms Cost. We all know that any Leader, trying to become dictator, Collects all the Guns. It has worked for Centuries, but not yet in America. The ” -isms ” are always trying.to enslave us.

Regardless of who passes it or dictates it, gun confiscation is the quickest, surest way to spark a violent revolution.