…but they may want stricter gun laws 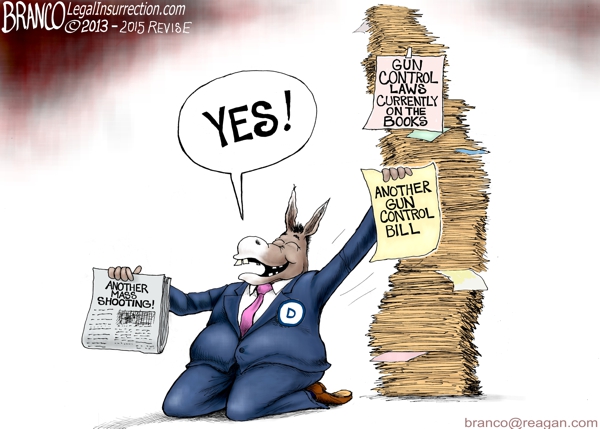 A Gallup poll released today shows that the vast majority of Americans do not believe that handgun ownership should be limited to “authorized” persons like police or other law enforcement officials. 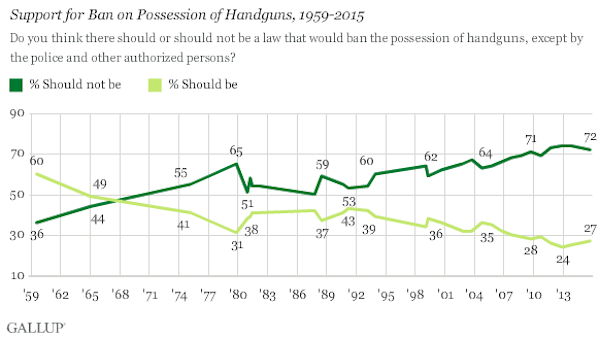 The 27% who support a ban represent a near-record low in the number of Americans who want to place extreme ownership restrictions on handguns. However, Gallup’s poll also showed that a majority of Americans do favor stricter rules about who can have access to and own handguns. 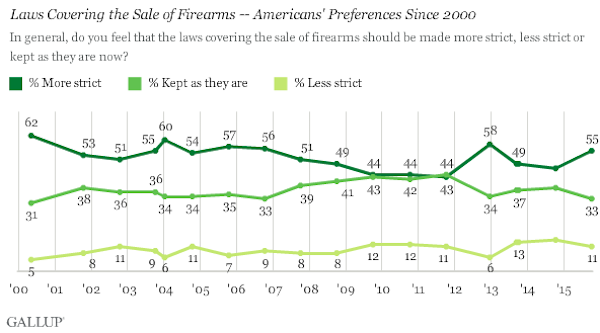 According to Gallup, it is mostly Democrats and Independents fueling this trend. Support for more regulations has increased both in those who do not own a gun, and those who claim gun ownership.

In their analysis, Gallup included a breakdown of how high-profile shootings have historically affected these numbers:

In 2007, the year of the Virginia Tech massacre, the percentage of Americans who favored stricter laws on gun sales dropped to a bare majority (51%) for the first time in several years. Since then, support for stricter laws had stayed under 50%, except in the wake of the Sandy Hook school shootings in Newtown, Connecticut, in December 2012. At that point, 58% of Americans said they were in favor of stricter laws on gun sales. Although support for stricter laws receded after those shootings, in which a young man fatally shot 20 children and six adults, it has yet to return to the 44% level it was at before that tragedy.

The latest increase, from the Gallup Crime poll conducted Oct. 7-11, came in the days after the most recent high-profile mass shooting, at a community college in Oregon. However, that event seems to have mainly affected Americans’ views about laws on gun sales, but not other topics relating to guns.

Their comment on the Oregon shooting is telling. After that event, the cycle beat to death the concept of restricting gun sales—and now pollsters believe that their samples are responding to that particular aspect of the gun debate. This tells me that conservatives and other pro-gun advocates should consider compartmentalizing that support as a way of better explaining why a Constitutional approach to gun ownership is the best approach.

If these numbers represent the beginning of a trend, conservatives have a lot of work to do.

“…a Constitutional approach to gun ownership is the best approach.”

Um, a constitutional approach is not the best approach. It is the only approach. Shall not infringe.

Hey, I support keeping all weapons out of the hands of crazy people.

Just show me empirical proof that there’s a means to know who crazy people ARE that does not produce false positives, first.

Show me that the Collective will not try to throw a broad loop over people with ANY history of using anti-depressants as a criteria. Or ANY combat vet.

Until that happens, you can whistle up a pipe. 9mm at a minimum…

At this rate I’ll never be able to afford a Tavor.

Saw two at Cabela’s in Lacey, WA for $2k each. That’s not excessive.

Most of the crazy people are DemocRATs, Want proof? Just look at the list of people who went on rampages in the last 10 years.

My philosophy is quite simple. It can be condensed into a simple word. “BLOAT”!
Buy Lots Of Ammo Today. It is my opinion that ammo may become the future currency of this country for an undetermined period in our history. Buy it for yourself and in calibers you don’t even own. Your cohorts may need it and you may become the hero of the skirmish.

Rick, sorry about the down tick – I was trying for the “reply” button.

Did you see that California is planning to require background checks to buy ammno?

California politics is dominated by dark souls who think we are all cattle that can be herded like sheep. In fact they could save more lives by requiring background checks on individuals buying alcoholic beverages.

Just imagine the cost that will be born by out of state internet sellers of ammo when they are required to perform checks before completing the orders they receive from lawful consumers in California.

However I can’t feel bad for gun owners who don’t protest and stand up for their rights.

If you want to see the future of firearms usage and the industry as a whole I suggest you look at the automobile industry. Cars and trucks should be simple as they were in the 50’s, 60’s 70’s and 80’s. Before the CAFE standards and all the bings, bongs, and whistles of current autos. Step on the brake before you can start the car. Connect the seat belt to stop the alert and/or your radio audio is suppressed. Take your keys out of the ignition or the noise never stops. My company goes through hell because we force our dealers to disconnect the key alert because our technicians must frequently leave the keys in the vehicle and the doors open when working in the field. Head lights on always. Cars that are programmed or chipped not to exceed 80 MPH. The list goes on.

Translate that to “Safe / Safer Guns”. Why not GPS real time reporting of location to a cloud server. Finger print or ID rings for authorized users. Combinations locks and cameras and micro audio recording chips will be added to aid the prosecution.

I’ll close by saying the wolves circling the sheep herd are not criminals anymore. The predators the sheep dogs need to worry about now are politicians.

In my own gun-phobic, super-deep-blue state, my imaginary poll would indicate (IF I ever took one) that 92% of my state’s residents don’t know the first damn thing about firearms, and that 97% of them nevertheless see fit to spew their incessant gun-control nonsense every chance they get.

More than just a shame…

We’re lucky that all the GOP candidates oppose gun control. Otherwise the NRA might support Bernie Sanders. Look how they caved on Obamacare.

My idea of stricter gun laws: no guns for Muslims. Everyone else must learn to shoot and have a gun in the house.

An armed society is a polite society (except when you see a Muslim with a knife).
Buy more ammo.