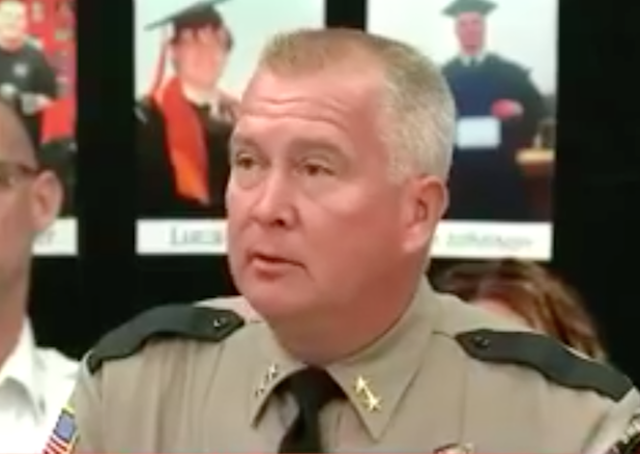 You’ll be glad to know that anti-gun activists have finally found a scapegoat for last week’s mass shooting at Umpqua Community College in Rosebud, Oregon.

They haven’t gone after the shooter(!), or the gun(!!), or the GOP(!!!); instead, they’ve decided to demand the head (and job) of Douglas County Sheriff John Hanlin. Hanlin’s force responded to the situation at Umpqua, took the initial lead in the investigation, and handled the massive media response.

At the close of a recently-finished press conference, Douglas County Sheriff John Hanlin expressed his "most sincere appreciation to those most directly touched by this incident."

From the Brady Campaign:

The Brady Campaign to Prevent Gun Violence is calling for the resignation of Douglas County Sheriff John Hanlin, effective immediately. The Campaign has also called for his replacement as lead investigator of the Umpqua Community College shooting.

“John Hanlin should tender his resignation from the Douglas Country Sheriff’s Office and be immediately replaced as lead investigator on this case,” said Dan Gross, President of the Brady Campaign to Prevent Gun Violence.

“Citizens of Oregon voted for the expansion of Brady background checks in a law signed by Governor Brown this past May. In pledging not to enforce the new law, John Hanlin has clearly demonstrated that his political ideology trumps his responsibility to protect his community. The victims of last week’s shooting and the entire community deserve a thorough investigation that will get to the bottom of this heinous crime – an investigation that must be grounded in facts and evidence, not myth and bias.

“When questioning the realities of the September 11th attacks and the massacre at Sandy Hook Elementary, Sheriff John Hanlin posited a simple question – ‘Who can we trust anymore?’ He has made clear to Oregonians that it surely is not him.”

Where is all this coming from?

Last week, the New York Times published an article focusing on Hanlin’s history of pushing back against federal regulations on firearm ownership. The article also drew attention to a 2013 letter Hanlin drafted to Vice President Joe Biden in the wake of the Sandy Hook Shootings, indicating his unwillingness to enforce regulations he deemed to be unconstitutional.

A photograph of the letter is still live on the Department Facebook page: 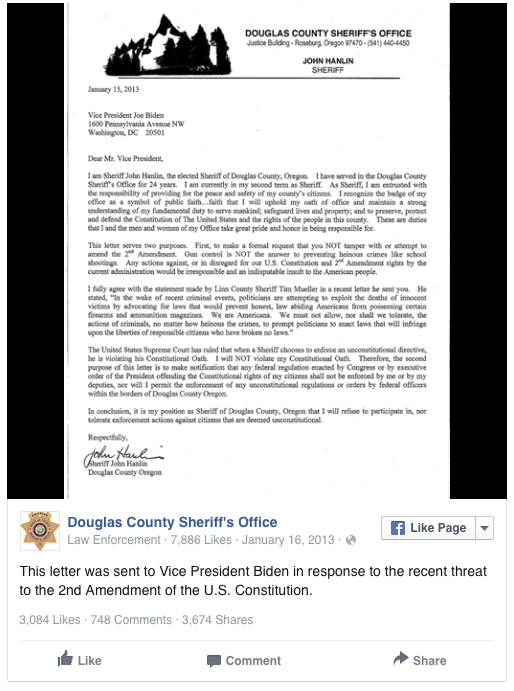 The article also shines light on a 2013 Facebook post from Hanlin’s personal timeline discussing a video touting conspiracy theories about the Sandy Hook shooting and 9/11 attacks.

The Times has a screenshot of the post, which has since been deleted: 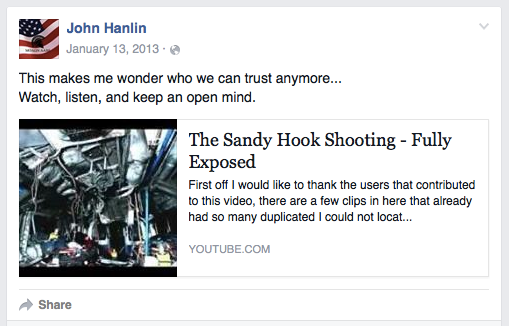 The video that Hanlin posted is still available on YouTube. It comes with a warning of graphic content:

Of note: nowhere in the Brady Campaign’s statement, the Times article, or anywhere else is it suggested that a failure to perform on Hanlin’s part in any way contributed to what happened in Oregon. No failures have been alleged on the part of law enforcement.

No—his crimes are thought crimes, dusted off and trotted out as evidence that he is unfit to serve or lead. We’re free to agree or disagree with Hanlin’s world views, but what the Brady Campaign is doing here is despicable. Instead of having the courage to dig deep at the true nature of the crime, these activists are happy to hoist up an innocent person as an example.

In other words, par for the course.

Just shows how liberalism and socialism are mental disorders.

The Sheriff supports the Constitution so he must be destroyed!

In pledging not to enforce the new law, John Hanlin has clearly demonstrated that his political ideology trumps his responsibility to protect his community.

It’s cute, though, when progressives suddenly decide that the officials of every city and county must obey and enforce the letter of the law, regardless of whose rights they have to trample.

I hereby call for President Obama to resign, effective immediately.

Huh. I don’t get it. What was the point of that?

As usual, something stinks . . . and Mr. Barky was awfully quick to make a public statement serving his political agenda . . .

1) There’s supposedly a ‘manifesto’ somewhere – that the shooter made sure the authorities received via a survivor. Why hasn’t any information been released to the public?

2) The shooter seems to have had an affinity for ISIS and it’s flag?
http://moonbattery.com/?p=63774

3) Obfuscate and go after the sheriff?

I am just going to post these here. They are re-posts, but so relevant.

The truth about gun deaths: numbers and actual solutions

“The average deaths in a shooting rampage when stopped by police is 14.3.

The average deaths in a shooting rampage when stopped by civilians is 2.3″

There do seem to be people who are thinking carefully about the situation. The Brady Campaign and the US President, however, do not seem to be serious about doing something effective.

Bill Whittle…and one of his best, IMNHO. Share it with your friends and family!

Good Lord the progressives completely lack self-awareness, don’t they? They send out the thought police, yet they wonder why others jealously guard their second amendment rights. Utter morons.

Oh. It’s not the sheriff they are really after, but all the locals, who have done their own thinking:

This is a small town with a tradition of hunting, and they may have collectively concluded that they need to pack more heat, including the local clerics.

Somebody heard the wakeup call, and this administration is pulling out all stops to make sure it doesn’t spread. We will see how well that works.

I’ve read, but do not recall exactly where, that the number of guns has substantially increased in this country, while crime has been decreasing. Some people have drawn a correlation between the widespread availability of abortion and a smaller population of criminals.

However, it has also been 14 years since September 11th, 2001, and it is also possible that a large portion of our citizenry has decided to be better prepared for attack, thereby bringing about a reduction in crime, if not terrorist attacks.

Irascible citizens may be the answer to containing both crime and terrorism.

I have a feeling that the Brady Bunch will only successfully raise some money from idiots over this.

They won’t get much traction in that county.

He went about it all wrong. He should have declared his city a sanctuary city from oppressive federal gun regulations. Lefties are on board with that, aren’t they?

Call me when the voters of his county call for his head. Liberals don’t give a shit whose votes they overrule with their constant “he/she’s gotta be fired!” schtick.

The liberals create the Safe Killing zones for the criminals and ignore their own culpability for the deaths. Next, they try to destroy anybody who resisted the liberal policies that demonstrably do lead to deaths or at the very least, the death of our right to defend our families.

I really do think liberalism is a mental illness — Utopia at any cost! Evidence notwithstanding. Only soft feel-good concepts and intentions need apply.

Stand strong, Sheriff. You have done your duty well.

Douglas County is the type of place where, before the sissies of the world took over the educational system, kids would have shown up at school with rifles in their pickup trucks.

It’s far enough from the California border that it hasn’t been infiltrated too much by refugees, and most Portland hipsters won’t even know where it is. The prevailing ethos still revolves around logging, lumber, fishing, ranching, mining, and other forms of real work, with elk and deer hunting and salmon and steelhead fishing in your time off.

Yikes! The Orkel-head in charge is going to visit Roseburg on Friday.

He should save over half the jet fuel and go to Chicago to condole with the victims and families of the wounded and dead in just the last month.

But where’s the demagoguery value in that…???

Background laws can’t work if no one ever gets an accurate diagnoses and treatment.

As is typical in so many of theses mass shootings, it seems family members and neighbors thought the Oregon shooter was suffering from mental illness but no actions were ever taken. As he was an adult, though apparently dependent on his mother for support, there was, in fact, very little that could be done.

Right. Both the federal government and the state of Oregon already have laws prohibiting sales and or possession of firearms to people with mental illness. But the person has to be “adjudicated” as mentally unfit, and there are lots of people roaming around out there who are mentally defective but haven’t been legally “adjudicated” as such or institutionalized.

The link in the article that goes to the U.S. Code is broken. Here is a working link. Just click on the subheading “Unlawful Acts”, under “Firearms” and scroll down to item (d)(4).

What price would a post-birth head, brain, heart, etc. fetch at Planned Parenthood?

It seems like pro-choice/abortionists prefer the really fresh stuff. Perhaps this gang has been infiltrated by the pro-choice/euthanasia activists.

Just in case some people do not know, we Oregonians did not vote on expanded background checks. They were shoved down our throats by our state government with the people in very stringent opposition. SB941 was passed through both Senate and House as an Emergency bill, which means there is no public vote, nor once it passes can it be put up to scrutiny.. The Brady campaign needs to stop it’s lies.

If the Brady bunch stopped their lies, they would have nothing to say. They are bleeding members at so high a rate, a few years ago they were selling their e-mail list to raise money.

Anything that comes from the Brady Bunch Campaign should be immediately dismissed as outright lies.

The Brady Center ought to pay attention to how they’re going to pay the $250,000 judgment for attorneys fees they cost one of their Aurora victim plaintiffs.

It turns out those two plaintiffs were actually paid employees of the Brady campaign. So that puts a slightly different spin on things as well.

Who the hell is the Brady Bunch to demand anything in Rosebud, Oregon? Are they citizens? Do they vote in Rosebud? No? Then STFU!

The first amendment guarantees their right to demand whatever they like.

I wonder if the Brady bunch has a tax exempt status that they could lose over blatant political lobbying?

Yes, both the Brady Center and the Brady Campaign are tax exempt, and donations to the Brady Center (but not to the Campaign) are tax deductible. No, they’re in no danger of losing either of those statuses. Why would they be?

1) this is not lobbying

2) what gave you the idea that non-profits may not lobby? Lobbying is most of what the Brady Campaign does, and there’s nothing inappropriate about that.