Stormy Forecast for US – China Relations

Stormy Forecast for US – China Relations

Are relations between the two countries bound for a “Superstorm”? 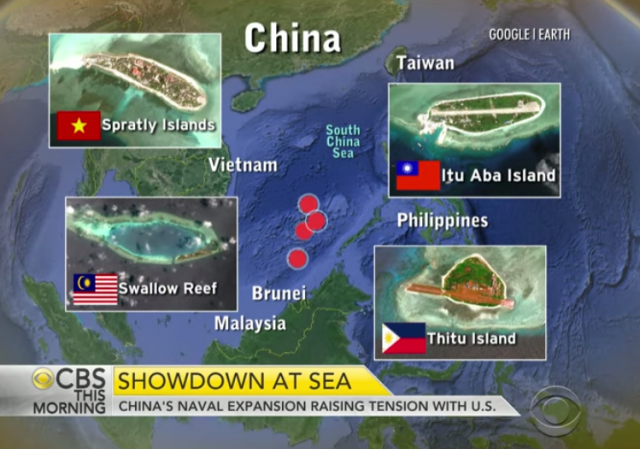 As our East Coast deals with the effects of Hurricane Joaquin and tens of thousands are evacuated in Southern China from the path of typhoon Mujigae, it appears that the relationship between the two nations is headed for equally turbulent weather.

While Obama was meeting with Chinese President Xi Jinping to complain about his nation’s hacking of our cyber systems and carping about Russian escalation in Syria, reports indicate that China was preparing to increase its presence in the Middle East conflict:

Earlier this week, Chinese naval vessels have allegedly traveled through Egypt’s Suez Canal and entered the Mediterranean Sea. According to a senior officer in the Syrian Arab Army, and confirmed by a Russian Senator (in the propaganda outlet Pravda), the naval vessels are headed for Syria’s Port of Tartus, and that “China has joined [Russia’s] military operation in Syria.” The reports indicate that the Chinese vessels will reach Tartus within six weeks. No explanation is given in these reports for the long time frame.

From the point of view of Generational Dynamics, Chinese military cooperation with Russia in the Mideast is strongly counter to the predicted trends. As long-time readers are aware, the prediction is that the US and China would be the principal enemies in the approaching Clash of Civilizations world war, and that the US would be allied with India, Russia and Iran, while China would be allied with Pakistan, Saudi Arabia and other Sunni Muslim countries.

SmartPower™ Alert: President Obama will now assert that this is a sign of Chinese weakness!

Perhaps the most positive consequence of these recent developments is that Obama has developed an appreciation for a robust military. Legal Insurrection has been following China’s increasing interests in the South China Seas and the Indian Ocean, with a new “Great Game” to encircle its rival India and exert even more influence globally.

The Obama Administration appears to be taking a Putin-esque approach to China’s stragtegy:

The United States is preparing to maneuver naval warships and aircraft close to China’s artificial islands in the South China Sea, in what would be the Obama Administration’s toughest response yet to Beijing. Reportedly, the White House is readying plans to send warships within twelve nautical miles of several of the islands—a move that China claims would be an illegal violation of its sovereignty. Citing a U.N. treaty, the United States argues that man-made outposts cannot be construed as legitimate territory.

The Chinese press offers this take on the increasing friction between the two countries: Americans are making China a scapegoat for its economic troubles!

And more blah-blah yet. It seems the biggest export of the United States these days is to blame. Americans are certainly not keeping much of it at home when it comes to figuring out why the US economy has troubles.

….But rather than be honest and admit that seven years of this easy money regime without an underlying recovery has proved them wrong, they continue to insist that all will come right, as their textbooks prescribe, if only they are given yet more time.

And when that will not do any longer they look for a scapegoat and find a convenient one in China.

China has just experienced a stock market crash, and with the potential “global recession” triggered by its faltering system, our nation would be wise to batten down the hatches both militarily and economically. The relations between the two countries seem bound for a “Superstorm”.

For there to be a storm our P***y-in-Chief would need to have a credible objection to recent Chinese provocations.

Nothing in his history suggests he would.

The last time we had anything approaching this level of feckless leadership, Carter gave Iran to the mullahs and decreed Arafat a statesman. Almost 40 years later we are still dealing with the results of that incompetence. I don’t think any of us alive today will live to see the end of the damage done by the current fool.

Obama is pro-choice, which is a progressive form of Islam’s Taqiyya. Why wouldn’t the Chinese seek honest brokers somewhere else?

One of the solutions for local economic turmoil is a Short, Victorious War, normally caused by punching some nation that you know will fold like a cheap suit.

“Stormy Forecast for US – China Relations.”

In all fairness, President Obama did say climate change is the biggest threat we face.

Someone should suggest that the companies with manufacturing plants in China that they would have problems in the near future when China can’t export goods to the USA. That now would be a good time to move half of their production from China to other safe countries.