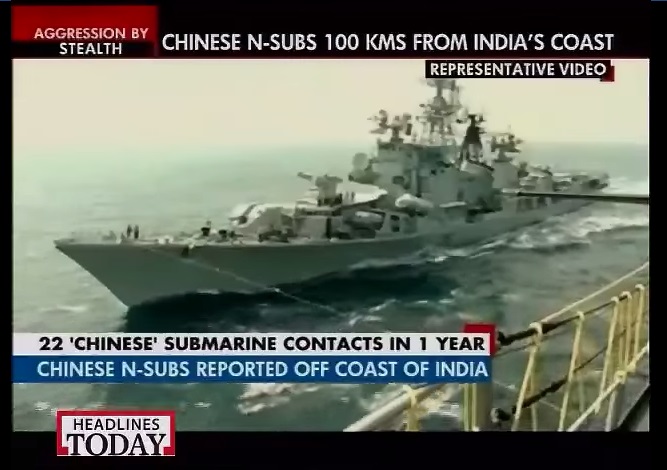 As President Obama is busy waging “quixotic” war on Greenhouse Gases, China is making real geostrategic and territorial gains in Indian Ocean and South China Sea. China is not only reclaiming Islands in its backyard — furnished with airstrips and Naval bases in the South China Sea, but also building a corridor connecting the western Chinese city of Kashgar to the Arabian Sea.

China’s plans are so aggressive and ambitious that it would make even a seasoned foreign policy expert’s head spin — don’t expect that from anyone in the current U.S. administration. While Obama administration spends big on climate change and works to shrink U.S.’s carbon-footprint, the administration is equally committed to shrinking U.S.’s geostrategic footprint in the world.

Sensing U.S’s disengagement from the Asia-Pacific and Indian Ocean, China is pasturing aggressively in the Indian Ocean to encircle its Asian rival, India. China and India share historic rivalries. After invading Tibet, China attacked India in 1962 — successfully pushing back Indian defences and occupying roughly 40,000 km of Indian territory. Since 1960s, China has made further territorial claims in India.

A recent report by policy research institute Asia Maritime Transparency Initiative (AMTI) describes the “construction of an artificial island near the Colombo South Harbor.” China is willing to invest $1.4 billion in the port city project, but faces opposition from President Maithripala Sirisena, the newly elected leader of the small Indian Ocean Island-Nation.

The cornerstone of China’s overall expansionist policy is Pakistan’s deep-sea port of Gwador. The Arabian Sea port of Gwador would not only open a new route for China’s oil and gas imports, but create a full-fledged Chinese naval base overlooking India’s Western Coast.

Pakistan’s location has been a key factor in the geopolitical alliance. On the edge of the Persian Gulf, Pakistan offers a bridging role for China. Pakistan’s ports overlooking the busiest oil shipping lanes have been a key element in China’s implementation of its “string of pearls” strategy linking the South China Sea, South Pacific Ocean and Indian Ocean.

There’s no love lost between Communist China and Islamist Pakistan. In 2011, Pakistan’s ambassador to China, Masood Khan described the bilateral relations as, “higher than the mountains, deeper than the oceans, … dearer than eyesight, sweeter than honey (…) .”

China is aggressively shoring up its coastal defences, and encroaching on neighbouring countries while doing so. According to AMTI, Beijing’s efforts to reclaim islands in maritime sea is part of “China’s massive and controversial program to create a “Great Wall of Sand” across the South China Sea.”

China’s encirclement of India too would be complete if — or once — Beijing succeeds it its plans to acquire the Port of Djibouti in the Horn of Africa.  In case of an open conflict, Beijing then would be able to single-handedly impose a naval blockade on India.

With U.S. under President Obama is unceremoniously abdicating the leadership of the free world, China flexes its military muscles unmolested. China’s neighbours (India, Japan, Philippines, Myanmar etc.) are starting to get the foretaste of things to comes, once China start calling the shots in the world.

[Video] Bloomberg Business discusses why China-Pakistan Naval Deal is a cause for concern for India, broadcasted on April 20, 2015:

Like a no-show one term Senator whose previous life experience consisted of smoking dope and rabble-rousing as a “community organizer?” No?

Oh, how about a bunch of Ivy League lounge lizards who never accomplished anything in the real world? No?

How about a Senator whose entire career consists of traitorous lies about the US and engagements with our enemies? No?

Well, I’d say we’re pretty well screwed then. Good job progs, good job! Six years ago you handed our foreign policy off to a clown car full of incompetent boobs, and your ideological blinders are so thick that you still don’t see it.

I’m afraid it will take a mushroom cloud over a US city before the prog borg wakes up. And then it will be to get on their knees and submit to full-on totalitarianism or communism.

Like the Torries of the Revolutionary-era, today’s progressives yearn to be on their knees in front of a dictator or some other form of autocratic ruler. Liberty and individualism scares them.

There was this hacking.

The Administration decided not to accuse China in public because then China would ask for its proof and they didn’t want to give it.(presumably because this would giving China a roadmap on how to avoid detection. Probably people involved in counter-intelligence convinced them not to do it.)

This same problem exists with Iranian violations of the accord, but in that case, those same type of people were
not consulted, or this was overlooked.

Mistake number 1: Not making the accusation public just because you don’t want to make the proof public or give some evidence to China to “investigate.”

However, Obama was still looking to retaliate.

Here comes mistake number 2: Obama seems to working on the idea that any kind of retaliation has to be done in one fell swoop.

Why not just keep gradually escalating the pressure until China offers some satisfactory response?

Anyway Obama did not like the proposed measures because they seemed too trivial.

Meanwhile he does nothing at all, while asking for some creative ideas.

One creative idea gaining some traction is attempting to breach the Great Firewall of China. The United States doesn’t approve of it anyway, it works against U.S. interests, and the Chinese government would hate that.

Mistake Number 3: Obama is worried about Chinese retaliation, or you could call it escalation.

Here’s where it stands now, with Obama in the throes of indecision:

The Obama administration has determined that it must retaliate against China for the theft of the personal information of more than 20 million Americans from the databases of the Office of Personnel Management, but it is still struggling to decide what it can do without prompting an escalating cyberconflict.

Mistake number 4 about China: Obama is reducing the size of the military because he doesn’t want to back off from the sequestration unless Republicans agree to increase taxes, which is the only way he will fund it. Not other cuts and not greater deficits.

His fight with Congress on the budget is more important than long term U.S. National Security – or more precisely, he’s trying to have it both ways, trying to get the military to agree that more spending isn’t necessary.

That would be the elegant solution – the type of elegant, perfect, solution he always looks for

Mistake number 5: Trying to surrender U.S. control of the Internet, in spite of efforts in Congress to stop it.

Again, Obama wants to have things all ways.

A bit off topic…but I can’t help but think of the Philippine politicians who forced us out of Subic Bay and wonder if China would be less bold with its neighbors if we still had a military presence in the Philippines.

Not only not off topic but it’s a bullseye. Everybody knows doggone well that it’s true.

In light of America’s “Great Cretin,” why wouldn’t the Chinese play out their “Great Game?”

The real puzzle to me is why both the Russians and the Chinese are being so cautious. And, for that matter, the Norks. It’s been totally obvious that the empty suit in the Oval Office is the source of an international power vacuum for seven years now; that’s seven years countries with expansionist dreams have wasted. Perhaps they were waiting to see if he’s really the Surrender Monkey he seems to be.

“The real puzzle to me is why both the Russians and the Chinese are being so cautious.”

Easy answer. They know what overreach will produce at Obama replacement time. So, they will stay low key until after the election, in the hopes it produces “bought and paid for” shrillary, or, if they are real lucky, fauchohontas.