Hurricane Joaquin may have claimed 28 Americans on cargo ship

Hurricane Joaquin may have claimed 28 Americans on cargo ship 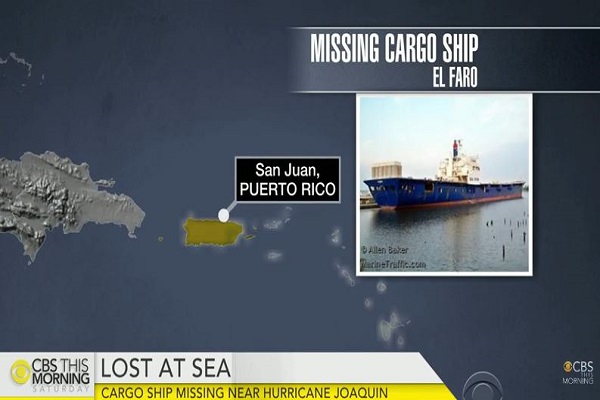 Hurricane Joaquin may have claimed the lives of 28 Americans without ever having hit land.

The US Coast Guard says it has resumed its search for a cargo ship with 33 crew that vanished in Bahamian waters during Hurricane Joaquin.

The 224-metre (735ft) El Faro, with 28 Americans and five Poles on board, was last heard from on Thursday and was reported to be taking on water.

The ship – which was travelling from Florida to Puerto Rico – was also believed to be listing at 15 degrees.

Joaquin brought heavy rains to the Bahamas, damaging a number of houses.

There have been no reports of casualties so far.

The now-weaker Category Four storm – with sustained winds of up to 210km/h (130mph) – is moving away from the island nation in the Atlantic.

At the present time, it appears as if the hurricane’s main impact will be on the Bahamas, though the Carolinas are enjoying a little “tropical moisture”.

Heavy rain lashed Charleston, S.C., and much of the Southeast on Saturday, giving the region little consolation from the fading threat of Hurricane Joaquin as it moved to the northeast away from the East Coast.

Police shut down traffic onto the peninsula, the area between the Ashley and Cooper rivers where the historic downtown area is located. Rising waters stalled cars throughout the low-lying area.

Retail stores along King Street, a main shopping area in the port city, lined sand bags along the sidewalk as protection from the threat of rising water.

As Hurricane Joaquin devastates the Bahamas and feints toward the east coast of the United States, and as American communities hunker down for superstorm potential, the connection to climate change is already clear. What’s more, a new study shows there’s a lot more of this sort of thing to come.

Already, Joaquin is being compared in advance to Superstorm Sandy, which devastated so much of the Atlantic shore, including New York City, only three years ago.

Such frightening anticipation may—or may not—turn out to be justified in this case. Chances are growing that Joaquin will swing north and out to sea, but predictions keep changing and hurricanes don’t always cooperate with prognosticators.

We are already well into the 2015 hurricane season—the Atlantic hurricane season runs from June 1st to November 30th, a season that has thus far met early predictions of being “the least active in decades.”

In the sweetest irony of the week, anti-global warming rallies planned by some East Coast college campuses have been moved indoors . . . to luxury hotels because of the cold, rainy weather.

Puerto Rico, the island nation in the Atlantic? I must have been asleep. When did this happen?