Obama: Putin is in Syria ‘Out of Weakness’

Obama: Putin is in Syria ‘Out of Weakness’ 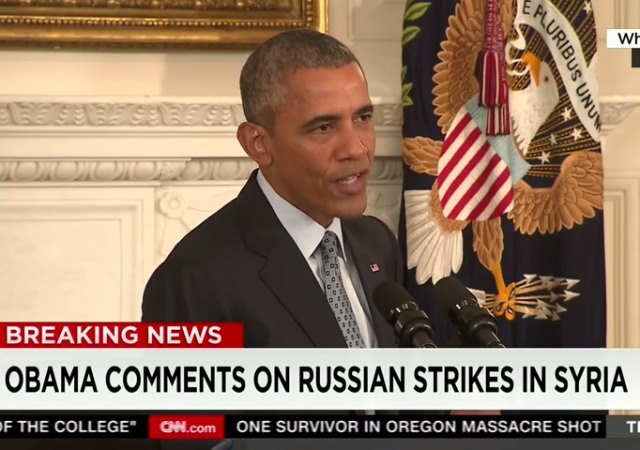 President Obama has a habit of trying to make himself look like the smartest guy in the room when things aren’t going his way and the disaster unfolding in Syria is no exception.

Speaking to the press Friday, Obama claimed that Putin is operating in Syria out of weakness and that this is all some sort of ruse on Russia’s behalf.

Obama: Putin Sent Military Into Syria ‘Out of Weakness’

Obama echoed the White House narrative that Russia was forced to enter Syria because the Assad regime, a long-time Kremlin client state, is in danger of collapse.

“Mr. Putin had to go into Syria not out of strength but out of weakness because his client Mr. Assad was crumbling and it was insufficient for him simply to send them arms and money. Now he’s got to put in his own planes and his own pilots,” Obama said.

In an attempt to rebuke the popular notion that Putin is a mastermind who the White House is scrambling to keep up with, Obama reminded the audience that Russia is part of a three-member coalition while the United States leads 60 nations.

“I didn’t see after he made that speech in United Nations suddenly the 60-nation coalition that we have started lining up behind him. Iran and Assad make up Mr. Putin’s coalition at the moment. The rest of the world makes up ours,” he said.

One could argue that Putin is making a mistake and that Russia will get bogged down in Syria just as they did in Afghanistan many years ago, but Obama still comes out of this looking feckless.

Jonah Goldberg gets to the heart of the issue in his new column at National Review:

If the humiliation of the Obama administration continues at this rate, by this time next week you should expect to see Secretary of State John Kerry on all fours at the United Nations, getting paddled by the Russian foreign minister and shouting, “Thank you, comrade! May I have another?”

On Monday, President Obama and Vladimir Putin had a meeting at the United Nations. All Putin wanted from it was a photo of the two men huddling together. The Russian president needed to show his people that he’s still a major player on the world stage, a big man driving events. Obama, who spent much of the last year trying to isolate the butcher of Ukraine, gave Putin exactly what he wanted. In wall-to-wall coverage, Russian media celebrated the big man’s diplomatic triumph and his geo-strategic genius.

If worst comes to worst, Obama can just draw another red line.

Not that it’ll mean anything.

Airstrikes don’t create jobs! There’s no place in the 21st century for airstrikes!

So how is it when we roam the world, playing policeman and sticking our noses in other peoples’ business, it’s ok, but when Russia or China do the same thing, we’re supposed to think it’s “bad”? I don’t see Russia doing anything in Syria that we haven’t done elsewhere — and it would seem they are far more effective.

Our current regime in Washington is made up of a bunch of children playing an adult game. They meddle and pull back; look tough, then act weakly. No one in the room trusts them or expects them to be rational.

Once upon a time, we stood by our friends and our words with actions that were meaningful. We were a thoughtful nation with diplomats and leaders. We had a consistent foreign policy. Now we rule with polls and soundbites and spin — and actions that come too late or never.

It’s not that picking sides in a civil war and ordering airstrikes is inherently bad.

It’s that Russia and Iran becoming the dominant powers in the Middle East (where for decades it was the U.S. and Saudi Arabia) is bad *for American interests*.

So how is it when we roam the world, playing policeman and sticking our noses in other peoples’ business, it’s ok, but when Russia or China do the same thing, we’re supposed to think it’s “bad”?

Virtual political and military isolation from the squabbles of Europe and Asia was deliberate American foreign policy for the first hundred and seventy years of the country’s existence.

But it didn’t work terribly well; goddamn if Europeans and Asians don’t persist in attacking the US no matter how determined it is to ignore them all.

The first time America really stuck its nose into global political affairs—ones of no direct consequence to the US or its citizens, at least—was Teddy R.’s brokering of a peace treaty between the Empires of Russia and Japan. This was generally considered a Good Thing (except by the Japanese, who believed that Russia ended up with the better end of the deal), and it won Teddy a Nobel Peace Prize—the same one later awarded to Obama, except that Teddy actually worked for it.

The next episode of butting-in was more martial. Germany’s bizarre attempt to tempt Mexico to attack the US rubbed Woodrow Wilson the wrong way, and all it got Germany in the end was another enemy, one nearly as populous as Russia but with the same industrial and economic strength as Britain or Germany. Strategically, a poor move on Germany’s part. But afterwards, the US settled back into its isolationist habits, and Europe busied itself with its usual hobby, a rush into another and even bigger war.

Finally the US was attacked again, though this time by Asia. One of the victims of the attack, the USS Arizona, was left where she fell, as a reminder that the world will bite you if you don’t pay attention. A further caveat—the realization that in the atomic age you might not get a chance to bite back—basically explains subsequent US foreign policy.

In short, when the US goes home, pulls the blinds down, and doesn’t answer the doorbell, the rest of the world acts like a bunch of a*****es. If the US stays engaged, the world acts like a bunch of jerks (including, of course, the US itself—after all, it’s basically just one of the game’s players, fundamentally much like the others). And from the US perspective, that’s an improvement, as jerks are not as likely as a*****es to attack the US just when it’s settled down comfortably.

The countries of the world could take a lesson from this. But of course they won’t, because they’re all a*****es.

Russia, China, Iran, et al are in Syria because of the Obama-created disaster that crosses three continents and the humanitarian disaster caused by pro-immigration advocates.

Why does the left insist Obama is brilliant?

Because he’s clean and articulate and not at all like a Conservative.

Brilliant because he majored in weakness. A major tenet of the democrat party platform.

I hope you weren’t looking in the mirror when you typed that.

The only weak person in the room is Obama.

Yeah the only problem with that Mr. President is that only your fellow effete ivory tower dwelling navel gazers view restraint in use of power to further one’s goals as “weak.”

The White House doesn’t need a court jester, they have Barack.

Barry Sotero is hiding under his bed, in the White House, in weakness.

Putin IS in Syria because of weakness. OURS.