“I never thought I’d be Speaker” 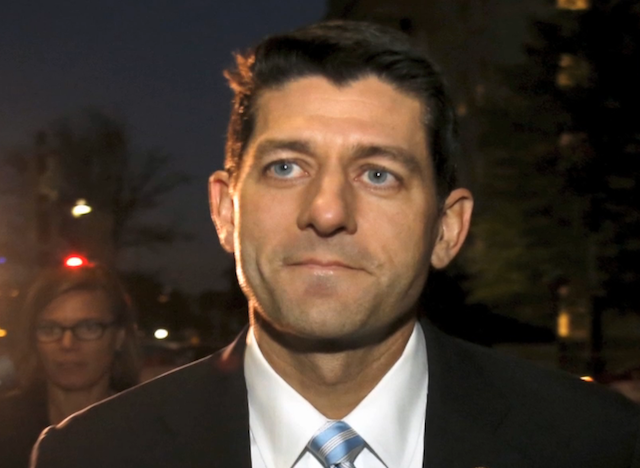 It’s official: Paul Ryan has formally declared his candidacy for Speaker of the House.

“I never thought I’d be speaker,” Ryan said in a statement. “But I pledged to you that if I could be a unifying figure, then I would serve — I would go all in. After talking with so many of you, and hearing your words of encouragement, I believe we are ready to move forward as a one, united team. And I am ready and eager to be our speaker.”

The speakership would be a dramatic career twist for the Wisconsin Republican, who was his party’s vice presidential nominee in 2012 and has repeatedly turned down pleas from colleagues to run for the post. He thoroughly enjoys his policy-heavy role as the chairman of the tax-writing Ways and Means Committee.

BREAKING: Ryan's in: Congressman declares candidacy for Speaker after getting unified backing from GOP.

Earlier today, Ryan secured a major victory against his detractors when Michigan Rep. Justin Amash publicly endorsed Ryan for the Speakership. Amash’s support came along with that of 70% of the House Freedom Caucus, which voted to support Ryan’s bid for the speakership.

Earlier this week, Ryan said that he would consent to a run for the speakership—if the party would unite around him.

Ryan is likely to be elected when the body votes next week.

Featured Image from The Hill

Not sure where I read it, or heard it, but Ryan campaigned against Prop. 187 in California, which was to stop illegal aliens from receiving government benefits.

It won, but as I recall a pernicious federal judge killed it.

So now California is broke, and large swaths look like a 3rd world country. I’m sure he’s anxious to do this to the rest of our country.

I can’t believe they’re trading Boehner for this. This is more of the same, except worse.

So Ryan wants weekends off to play with the kiddies. They’re young. He’s been in Congress like 16 years? So, what was he thinking in running for re-election so many times after they were born?

What kind of self-entitled douche is this guy?

May as well rename the GOP the French Party because all they do is surrender.

I am looking forward to judging him by his actions in office, as opposed to the overblown rhetoric from everybody that seems to have prevailed so far.

Did not mean to upvote you. As I was clicking to upvote Henry Hawkins, the page jumped as another freaking ad loaded.

It’s entirely fair and reasonable to judge him on what he has already done and said, as Ryan’s critics are doing.

Given Ryan’s constant work on open borders, amnesty, bailouts, and other decidedly progressive policies, my greatest fear is that he becomes a more competent Speaker than was Boehner. Might as well hand the gavel back to Pelosi.

Did you not see he agreed with the Freedom Caucus NOT to bring any immigration bill to the floor in this Congress?

Was in the form of a promise? Well, when a politician promises….

This is the compromise candidate huh? Well, maybe he won’t be a complete disaster.

So Americans have adopted the Canadian system of electing leaders, choosing the young guys who work out?

Interesting scenarios coming up, after the 2016 elections, with Ryan becoming Speaker:
1. Voters decide to throw the GOP bums out since they’re as bad as the Dem Socialists. Pelosi as Speaker? Yuck.
2. GOP retains control of the House but vote for a new Speaker, a conservative. So, what does Ryan do? Does he stay as a plain old Congressman?
3. The new GOP president (That Trump/Carson/JEB/Cruz person, hard to say which gets the GOP nod?) faces a Dem controlled Senate and a weakened House, so nuttin gets done.

It would be some much better if Ryan decides not to go for Speaker after all and that the GOP moves to make a Conservative the new Speaker, because “Speaker Ryan” would not be good for the country nor for the GOP. Besides, Ryan just loves to bring in new immigrants, but why?

What a disgrace. Republican Party jumps out of the frying pan, into the fire. Ryan is not only an Amnesty Clown but big on crony capitalism masquerading as free trade and cutting “deals” conceding everything to liberals.

Ryan has the support now of at least 239 of 247 Republicans in the House, including 80% of the Freedom Caucus.

It is clearly YOU who are out of step. Go form a new fringe nut party, and stop trashing ours.

Your approach is to cleanse the Party of dissenters who are upsetting the sheep. And call them names too, if they won’t bow down to the GOPe! Impressive but not favorably so.

How very, very GOPe – blame the voters, ignore the GOPe incumbents who’ve trashed their own party.

there just a bunch of chicken shits concerned only about their re-election efforts.

Weekday mornings I listen to a radio show out of Raleigh, a combination of morning drive yuck-yucks and Limbaugh-like conservatism, that runs from 6 am to 9 am. It is immediately followed by the Glenn Beck radio show. I don’t much care for Beck, the Weepy Would-Be Prophet, but I stuck with it because he had Freedom Caucus member Barry Loudermilk (R-GA) on to explain the FC support for Ryan. Beck basically tore him a new Obama, was all over him in a way most media folk don’t do, lest they lose access to future interviewees. Loudermilk had nothing, zilch, just the standard platitudes and DC-double-speak that explained nothing. They can’t explain it, because the truth likely establishes grand hypocrisies.

I spent the rest of the morning sharpening my pitchfork.

“I spent the rest of the morning sharpening my pitchfork.”

Good, I have a supply of tar* and feathers.

*that would be really good tar from the Tar Heel state…

The “Freedom caucus” has responded to threats of non support in their individual re-election bids IMO. As I said, a bunch of chicken shits not concerned with freedom at all.

Oh, they’re very interested in freedom – their own, not yours or mine.

of course, he’s one of them.

With approval from a supermajority of the Freedom Caucus, that means Ryan has the support of all but maybe eight Republicans in the House, yet the WHINOs are still not satisfied?

They are proving they are the lunatic fringe more every day.

Stop name-calling. He may have the support of his peers but they are there to represent their constituents, which come before their peers.

Voters have every right and duty to bit ch whine and grumble about these clowns partying on our dime.

“They are proving they are the lunatic fringe more every day.”

LOL, nothing like a stealth democrat to call republican’s the “lunatic fringe”. I suppose they are part of Clinton’s vast right wing conspiracy as well.

The “Freedom Caucus” has shown they are not concerned with freedom at all.

Less than a week ago, he promised he wouldn’t run for Speaker without the endorsement of the House Freedom Caucus. He didn’t get it. Now, he’s announced he’s running anyway.

A complete bum. Which describes just about every member of the GOP.

The GOP wants war with its base? It’s got it: the party is dead. Like a ‘money pit house,’ the GOP is not worth fixing. It needs to be abandoned, and left to collapse.

Let’s not permit these GOP bums work with the left to destroy our nation.

During that interview I heard this morning with Loudermilk (R-GA), sent out by the Freedom Causcus to explain their support of Ryan, he said they asked Ryan why it was that the likes of Harry Reid and Luis Gutierrez supported him. Loudermilk says Ryan told them their support is fake, done to damage his attempt to become Speaker via guilt by association. Oh, really?

“In the wide-ranging 53 minute video, which took place in Chicago, both Gutierrez and Ryan outline their shared plan for adopting open borders: that is, a national policy of allowing companies to bring in and hire as many foreign workers as they would like. This “free movement” of people across national boundaries is the centerpiece of the open borders ideology to which Ryan has devoted much of his career.”

Paul Ryan is already lying about his political allies, ultra-liberals like Gutierrez, and he isn’t even the Speaker yet.

To lie to House representatives, even in private, is to lie to the citizens they represent, and Ryan has no qualms about it whatsoever. He’s 100% pure me-first, screw the people GOPe.

But Henry, he also said he wouldn’t bring any immigration bills!

Henry, ya dumbass, I just provided video proof Ryan will lie out of political expediency. Why would you believe his ‘promise’ about bringing amnesty bills?

What Rush Limbaugh said today that National Review reports is that he wrote or said:

1. He would not bring to the floor a “comprehensive immigration” bill while Barack Obama is president – that is, during the remainder of this Congress.

2. He would not bring to floor any bill dealing with immigration that did not have the support of a majority of the Republican caucus.

Boehner had probably decided that already.

He has evebn managed to overcome the 140-character Twitter limit:

My statement after a meeting of the House Freedom Caucus: pic.twitter.com/lxmzBrUcms
6:08 PM – 21 Oct 2015

This goes to a photo that has 4 1/2 lines of text about 56 characters across.