Rasmea a testing ground for aggressive activist tactics that will be rolled out elsewhere. 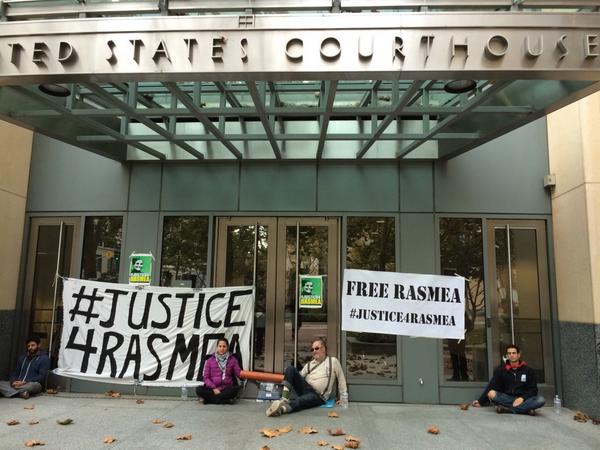 Rasmea Odeh is the supermarket bomber who killed Hebrew University students Edward Joffe and Leon Kanner in 1969, served 10 years in Israeli prison before being released in a prisoner exchange, and then made her way to the U.S. in the mid-1990s.

Rasmea then lied on her visa and naturalization applications, among other ways, by denying that she ever had been charged, convicted or imprisoned. Rasmea was convicted in federal court in Detroit in November 2014 of immigration fraud, sentenced to 18 months in prison, and ordered deported. Rasmea danced in the aisle of the bus back to Chicago after sentencing.

Rasmea is out on bond pending appeal, which will be argued in Cincinnati before the 6th Circuit Court of Appeals on October 14, 2105.

The Mythology of Rasmea’s Innocence

We have covered many times how Rasmea is being treated as a hero by the anti-Israel activist community, The Sickening Deification of Rasmea Odeh. That despite the fact that the evidence of her guilt in the bombing and the immigration charge is overwhelming.

That hero status is based in part on her claim that her Israeli conviction was solely because she falsely confessed after 25 days of sexual torture.  In fact, Rasmea confessed just one day after arrest, there was substantial independent evidence, and even a Red Cross observer said she received a fair trial. Rasmea’s co-conspirator decades later would brag on video about how Rasmea planned the whole thing.

Nonetheless. the confession claim continues to be asserted  by Rasmea’s supporters: 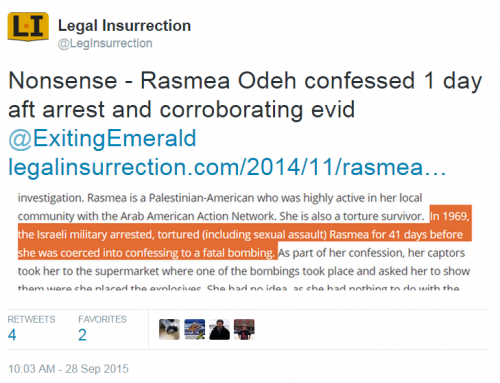 My assessment of the appeal merits is set forth in the following posts:

Lack of merit to the appeal aside, one never knows what an appeals court will do. And Rasmea has hit on a strategy designed to lead the appeals court to focus on things other than the actual merits.

Rasmea devotes much of her briefs to the torture claims even thought they are irrelevant to the single immigration count in the federal case. Whether her Israeli conviction was just or not, it had to be disclosed on her immigration forms under the plain wording of the forms. Relitigating the Israeli conviction would not change the fact that at the time she signed the immigration forms, Rasmea had been convicted and served 10 years in prison — the non-disclosure bell cannot be unrung.

That is a point which, while the prosecution makes it, easily could be lost on the judges, particularly since anti-torture groups submitted an Amicus Brief urging the Court to have a new trial at which such allegations could be litigated. The Appeals Court judges might be swayed by the allegations out of sympathy, even though logically irrelevant to the charge on which Rasmea was convicted.

Additionally, the prosecution has substantial evidence disputing Rasmea’s claim, but I understand why the prosecution didn’t mention that evidence in its brief except in passing. To open up the issue on appeal even though it is legally irrelevant is precisely what Rasmea wants. Nonetheless, with Rasmea’s allegations hanging out there unrebutted, one wonders if it will sway the judges somehow.

Depending on how oral argument proceeds, and the judges seem to be reacting, the prosecution may have to get into these issues. It’s a tactical judgment call, so we’ll see what happens.

But aside from the distraction in the briefs, Rasmea’s supporters are attempting another distraction — protesting outside the courthouse and packing the courtroom during oral argument.

This is a tactic used at the trial court. Rasmea’s supporters were so aggressive that the trial judge had to issue two orders requiring Rasmea protesters to stay away from jurors, and arranging for jurors to be transported by deputies to the court house so as not to have to run the gauntlet of Rasmea supporters.

At the Annual Meeting last weekend of the anti-Israel US Campaign to End the Occupation, Rasmea was given an award: 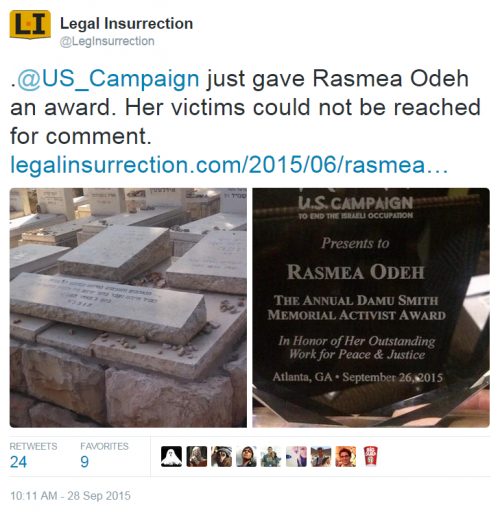 But more than that, a session laid out the strategy of using Rasmea as a test case for activism as to the courts (underlining added):

Join leaders of the U.S. Palestinian Community Network (USPCN)–the main organizers of the Rasmea Defense Committee–as we discuss the challenges and victories from the past two years of organizing in her defense. Discussion will include a legal update on the case, in addition to a sharing of strategies and tactics that helped build the international movement in support of #Justice4Rasmea. These will include political framing of government attacks on community members, building a base of support outside of traditional activist communities, adapting and implementing mechanisms developed by the Rasmea Defense Committee for other campaigns, and more.

The strategy is playing out on the appeal by busing supporters to protest outside the appeals court house and packing the courtroom again: 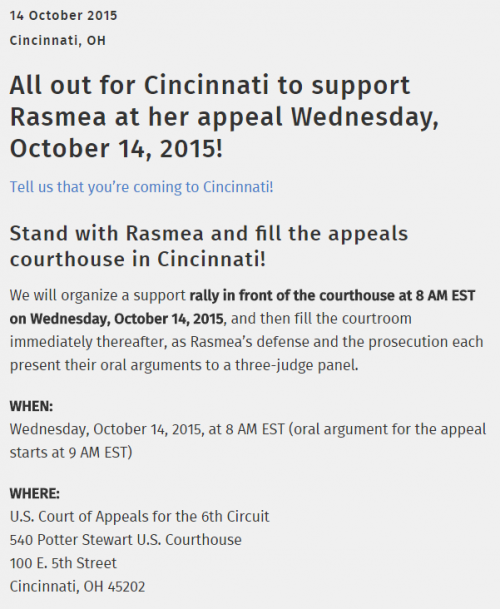 The strategy is intended to influence the judges, as the fundraising appeal raising money for the buses makes clear, quoting Rasmea’s attorneys (emphasis added):

As her defense attorneys have said since the beginning of this ordeal, “You [Rasmea’s supporters] provide public testimony when you rally outside the courthouse and then file in to fill the courtroom. Public testimony of not only the power of Rasmea’s positive influence on her friends and colleagues, and the people she organizes, but public testimony also of the fact that she did not receive a fair trial and that there are people who are going to hold the system—prosecutors and judges—accountable.

In our system you hold judges and prosecutors accountable through the judicial system, not mob rule.

Unfortunately, mob rule increasingly is coming to anti-Israel activism in the U.S., as it has in Europe. The Rasmea case is one of the testing grounds, and a preview of things to come.

1. they know when they’re being messed with, and

2. they are the LEAST prone to be FAVORABLY influenced by idiots on the sidewalk of all human beings.

I don’t know anything about courtroom procedures, but if I were the judge, I’d tell the audience in the courtroom that if I hear one peep out of you, I’ll clear the courtroom and you can watch the proceeding from a TV in the parking lot.

Sadly, if Odeh stretches it out another 16 months, she’ll probably get a pardon from Obama, along with anybody still in Guantanamo and the cop-killer Mumia Abu-Jamal. Obama’s outgoing pardon list is gonna look like a rogues gallery of America haters. It’ll be one last poke in the eye to America, from our Jeremiah Wright loving President.

And the Rasmea Odehs of the World (millions of them) will dance in the streets.

I have no doubt that Obama will abuse the pardon power, as he has abused every other presidential power, but he will not pardon cop-killer Mumia Abu Jamal, because he can’t. Mumia was convicted on state murder charges, and Obama has no power to pardon criminals convicted of state crimes, only federal.

Right. And, on that pardon list, at the top, is likely to be a general pardon for Obama himself, Hillary Clinton, Lerner, and all the other top figures in his administration that have broken federal laws. The pardon power is absolute, there is nothing to stop Obama from pardoning himself and all the other corrupt people he has given power.

If the #Justice4Rasmea crowd wants to live by mob justice, I’m sure that they won’t complain when mob justice comes for Rasmea.

How much further will things be escalated before all hell breaks loose?

As I tell my kids, keep whining and I’ll give you something to whine about.

Federal judges with good behavior life tenures are well insulated from public pressure, as they should be. Human nature being what it is though, one potential reaction to being harassed may be to harden positions. Although they sometimes make mistakes, the quality of federal court of appeals judges is in my experience fairly high and I doubt they will be fooled by misdirection. You never do know though.

I still disagree with your assessment that her torture claims are irrelevant. Her whole defense seems to be based on the idea that her torture gave her such a severe case of PTSD that years later, when she saw the question on the immigration form her subconscious made her misunderstand it in a way that would let her avoid thinking about that terrible time.

Of course it’s all a pack of lies. She was not tortured, she has no PTSD, she understood the question perfectly well and chose to lie. Someone whose conscience had no problem with the prospect of brutally murdering dozens of people would certainly not be disturbed by lying about it years later. But it’s not an illogical pack of lies. Someone who really was tortured as she claims to have been might well react as she claims to have done.