as Rasmea fêted by anti-Israel activists.

Rasmea Odeh is the supermarket bomber who killed Hebrew University students Edward Joffe and Leon Kanner in 1969, served 10 years in Israeli prison before being released in a prisoner exchange, and then made her way to the U.S. in the mid-1990s.

Rasmea then lied on her visa and naturalization applications, among other ways, by denying that she ever had been charged, convicted or imprisoned. Rasmea was convicted in federal court in Detroit in November 2014 of immigration fraud, sentenced to 18 months in prison, and ordered deported. Rasmea danced in the aisle of the bus back to Chicago after sentencing.

Rasmea is out on bond pending appeal.

We have covered many times how Rasmea is being treated as a hero by the anti-Israel activist community, based in part on her claim that her Israeli conviction was solely because she falsely confessed after 25 days of sexual torture. In fact, she confessed just one day after arrest, there was substantial independent evidence, and even a Red Cross observer said she received a fair trial.

Decades later, after they all were out of prison, Rasmea’s key co-conspirator credited Rasmea with being the mastermind of the supermarket bombing. 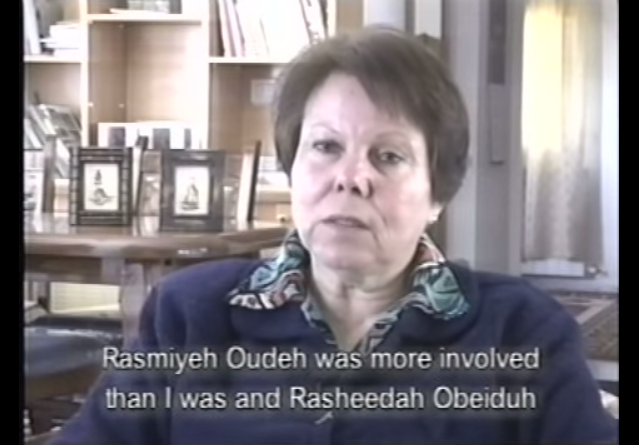 The fêting of Rasmea has picked up steam. She appeared at a fundraiser attended by 500 or so people at the University of Illinois – Chicago, in a joint appearance with Angela Davis: 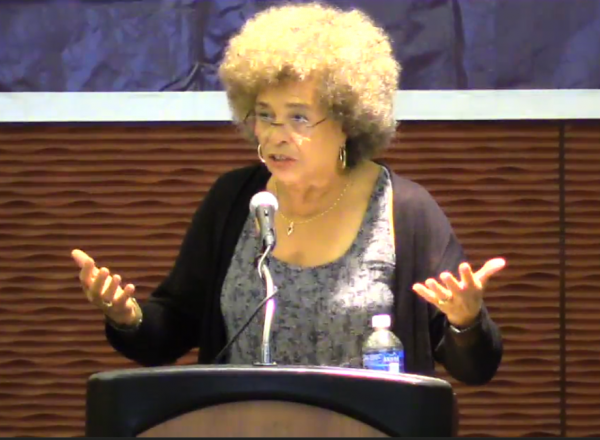 Here is her speech at the fundraiser, where Rasmea pursues the #BlackLivesMatter theme she has adopted to generate support:

But there is a fundamental inconsistency in the appeal that should taint, if not completely eviscerate, Rasmea’s legal arguments. Rasmea’s appeal takes the legally and factually inconsistent positions that Rasmea had an actual, conscious understanding of the word “EVER” that limited the time scope to her time in the United States in the context of other questions on the form; and separately, that PTSD from the alleged torture caused her to block out the Israeli conviction and imprisonment….

So which was it? Rasmea was conscious of the conviction and imprisonment but didn’t think the questions called for disclosure, or she blocked everything out because of PTSD arising from alleged torture more than 25 years earlier? You can’t have it both ways, but Rasmea’s appeal tries to.

This has profound implications for the legal aspects of Rasmea’s appeal. Her own trial testimony negates the claimed need for an expert witness, even assuming there were a legal basis for the expert; Rasmea would have been calling the expert to contradict Rasmea’s own trial testimony. This would render any legal error as to the expert “harmless” and not the basis to overturn the conviction.

Late this afternoon the Government filed its Appeal Brief (full embed at bottom of post).

I don’t predict how a court will rule; I’ve been surprised too many times. But I will say how the court should rule, and in this case, it’s an easy decision to uphold the conviction.

The prosecution brief completely eviscerates the main legal claim on appeal, that the trial court incorrectly applied a general intent standard to the crime, instead of a specific intent standard. In plain English, the trial court held that the government only needed to show that Rasmea knowingly lied, not that she did so for the purpose of obtaining immigration status. The government went through all the pertinent case law, and convincingly argued that the language of the statute in question did not impose a specific intent standard.

This is important, because Rasmea claims she was denied a chance to present her defense because the trial judge would not allow her to call an expert as to PTSD resulting from the alleged torture. Under a general intent statute, such a defense is not allowed.

The government also easily dealt with issues such as whether the Israeli military court records should have been admitted into evidence. Rasmea on appeal argues that a military court is not a real court and therefore did not fall under the legal mutual assistance treaty pursuant to which the records were admitted into evidence. The prosecution pointed out that the treaty is not limited to court records, and covers government agency records (which in Israel would include the IDF). And in any event, Rasmea in her testimony admitted to the conviction and imprisonment.

But most important to me, the prosecutors picked up on the point I made in my blog post, that Rasmea’s entire appeal is premised on being denied the chance to introduce testimony (both expert and her own) as to her PTSD that contradicted her own trial testimony.

The flaw in Odeh’s argument is that as she posits it, the expert testimony would have contradicted, not supported her trial testimony. At trial, Odeh testified that she was fully aware of her criminal history, and that upon analyzing the form, concluded in good faith that it did not request information about events other than in the United States.

Thus, when asked on direct examination why she had answered “No” to the criminal history questions on the naturalization application, Odeh testified that after reading previous questions, such as “Have you ever claimed to be U.S. Citizen in writing or any other way,” and “Have you ever registered to vote in any federal, state, or local election in the United States,” she consciously and rationally concluded that all the questions must refer to the United States. (R. 182: Tr., 2365–66). “When I continue the other questions, my understanding was about United States. So I continue to say, no, no, no.” (Id. at 2366).3 Odeh continued her direct testimony by answering the question, “when you were filling out that form and they asked you were you ever in prison or convicted or arrested, did you ever, did you think at all about what had happened to you in Israel in 1969 and 1970?” Odeh answered, “Never I thought
about Israel. My understanding was about United States, and I believe if, if I knew that about Israel, I will say the truth.” (Id. at 2367).

Thus, if the psychologist had testified, the jury would have been squarely presented with Odeh’s testimony that she consciously and in good faith analyzed and thought about the information and contradictory testimony from her own expert witness. It is a strange argument indeed which asserts that Odeh’s defense was impaired because she not allowed to present an expert who would have contradicted Odeh’s own testimony.

This is what happens when someone forgets which lie to tell. Rasmea took the stand, and her attorney drew out of her the cockamamie claim that she carefully read the questions and didn’t think that they covered her time in Israel. But that is inconsistent with the PTSD theory that she blocked out her Israel memories.

Hopefully the appeals court will see it this way.

In the meantime, Rasmea’s supporters just sink deeper into the muck celebrating Rasmea as some sort of hero. And Rasmea is lapping it up, visiting with a real victim, Kim Bok Dong: 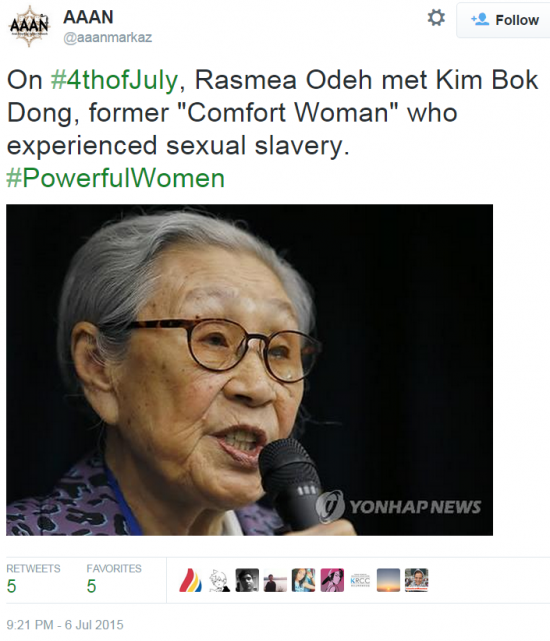 As for Rasmea’s lead cheerleaders, Justice for Rasmea, well I guess they don’t want me to see their cheerleading: 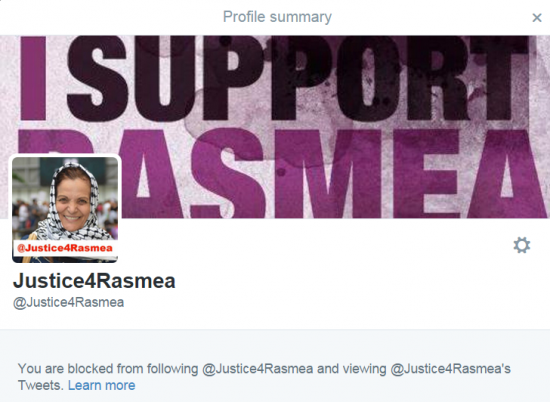 Thanks for the link to the brief. Looks like the appeals court could avoid addressing the issue of error, because it would have been harmless.

How could anyone applying to immigrate/visit the USA think that the questions pertained to just inside the country is beyond me.

She’ll be teaching at a major university. You’ll see.

No wonder they don’t want to “friend” you on FaceTwitter or whatever those new-fangled thingies are called.

You are just SO obsessed with facts, and justice, and a few yootful indiscretions…