Under BDS rules, Matisuyahu’s concert in Oświęcim, Poland, must be banned

Under BDS rules, Matisuyahu’s concert in Oświęcim, Poland, must be banned 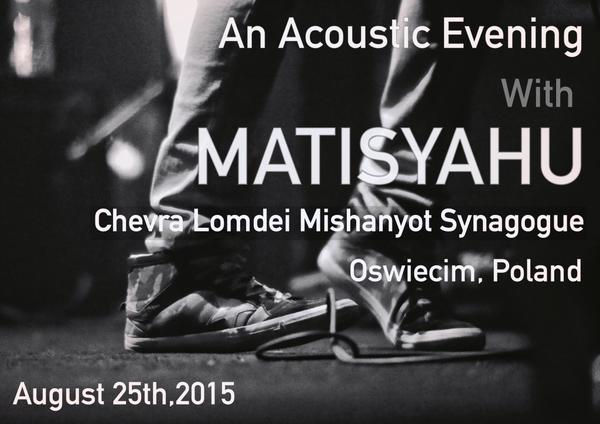 The Boycott, Divestment and Sanctions movement has declared that American Jewish musician Matisyahu must be banned from public concerts because he is too pro-Israel.

In a report at the anti-Zionist Mondoweiss website,  Benjamin Norton (who criticized the ban at his own website before the post was taken down), lays out the position of Omar Barghouti, leader of the BDS movement, that Matisyahu’s support for Israel makes him a bigot who must be banned. Among Matisyahu’s alleged sins was supporting the Israel Defense Forces.

When Matisyahu finally was permitted to appear on stage at the Rototom Sunsplash Reggae festival in Spain, over the objections of BDS, he was faced with Palestinian flags protesting his appearance.

Tonight was not easy but at the end of it all I feel blessed to be given the opportunity. Thank You! pic.twitter.com/B9EJuuEbOT Under the rules of engagement announced by BDS leadership, that concert must be cancelled.

The Chevra Lomdei Mishnayot synagogue is the only surviving Jewish house of prayer in Oświęcim of almost 30 that existed before the war. Built circa 1913, the Nazis devastated its interior and used the building as a munitions warehouse. After World War II, Jewish survivors in Oświęcim once again used it as a synagogue. In the 50s, the last Jews of Oświęcim left, and the synagogue stood empty. In the 1970s, the Communist government nationalized the building and turned into a carpet warehouse.

In 1998, the synagogue became the first Jewish communal property to be returned to a Jewish community in Poland and the recipients of the property, the Bielsko-Biala Jewish Community, donated the synagogue to the Auschwitz Jewish Center Foundation. The AJCF restored the building to its pre-war condition as described by survivors. It was reopened in September 2000.

As the only Jewish house of worship near Auschwitz-Birkenau, the Chevra Lomdei Mishnayot provides visitors with a sanctuary for prayer, reflection, and solace. Although it has neither a rabbi nor a local congregation today, it is under careful protection of the Auschwitz Jewish Center Foundation.

UPDATE: The concert appears to have taken place. Here is a short clip:

“Under the rules of engagement announced by BDS leadership, that concert must be canceled.”

The same town where Auschwitz is, the motives of BDS are unmistakably clear.

There was controversy about this video made by a survivor of Auschwitz and his family. I think it might be appropriate.
https://youtu.be/cFzNBzKTS4I