Reinvites Matisyahu, leaving leading American BDS supporters of ban exposed for what they are 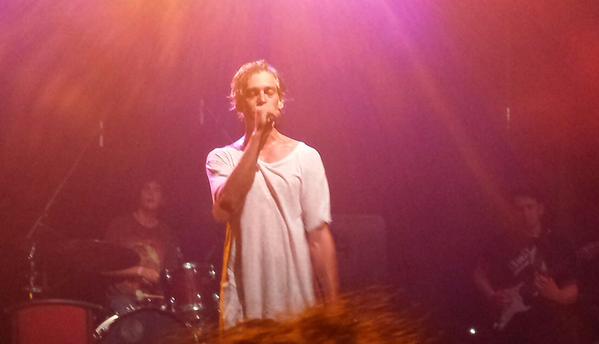 We wrote the other day about how the Boycott, Divestment and Movement pressured the Spanish Rototom Reggae festival to ban American Jewish musician Matisyahu because he refused to sign a pledge supporting a Palestinian state.

Matishayu’s position was that he’s just a musician and shouldn’t have to take a political pledge, particularly since he was singled out because he’s Jewish. No non-Jewish musicians were pressured to sign any pledges.

“The festival organizers contacted me because they were getting pressure from the BDS movement. They wanted me to write a letter, or make a video, stating my positions on Zionism and the Israeli-Palestinian conflict to pacify the BDS people. I support peace and compassion for all people. My music speaks for itself, and I do not insert politics into my music. Music has the power to transcend the intellect, ideas, and politics, and it can unite people in the process. The festival kept insisting that I clarify my personal views; which felt like clear pressure to agree with the BDS political agenda. Honestly it was appalling and offensive, that as the one publicly Jewish-American artist scheduled for the festival they were trying to coerce me into political statements. Were any of the other artists scheduled to perform asked to make political statements in order to perform? No artist deserves to be put in such a situation simply to perform his or her art. Regardless of race, creed, country, cultural background, etc, my goal is to play music for all people. As musicians that is what we seek. – Blessed Love, Matis”

Imagine if a music festival demanded Muslim participants to sign a paper "recognizing the right of Israel to exist" http://t.co/3GOEFgJ4Ir

The ban received widespread condemnation, including from a leading Spanish newspaper, Unacceptable Discrimination:

He is the only musician performing at Rototom, which is funded with public money, who has been demanded to make such a statement, and to make matters worse, he has been asked to do so solely on the grounds that he is Jewish: as said, he is not an Israeli national. When Miller refused to comply, the organizers of Rototom decided to cancel his appearance, scheduled for the final night of the eight-day festival. But the Spanish Constitution explicitly forbids any type of discrimination on the grounds of “birth, race, sex, religion, opinion, or any other personal or social condition or circumstance.”

It is absolutely unacceptable that in the Spain of the 21st century, individuals and organizations can still demand that somebody explain themselves in ideological terms in order to be able to exercise their profession, and takes us back to the dark days when everybody was required to prove their religiosity and purity of blood.

Anti-Semitism and discrimination on the grounds of ideology cannot be tolerated and must be stood up to. Criticism of Israel’s policies and defense of the Palestinians cannot be used as cover for systematic persecution of those who hold different views, or because they are Jewish. Spain’s politicians need to speak out about this scandal that questions this country’s commitment to free speech and thought.

The Spanish government condemned the ban:

“Imposing a public declaration [from Matisyahu] puts into question the principles of non-discrimination on which all plural and diverse societies are based,” Spanish foreign ministry officials said in a statement sent to media outlets on Tuesday afternoon. The Spanish Constitution forbids discrimination on the grounds of “birth, race, sex, religion, opinion, or any other personal or social condition or circumstance.”

The Festival organizers now have apologized and reinvited Matisyahu to perform (Via Google Translate):

A Rototom Sunsplash public institutional declaration regarding the cancellation of Matisyahu
1. Rototom Sunsplash rejects anti-Semitism and any form of discrimination towards the Jewish community; we respect both their culture as religious beliefs and we sincerely apologize for what has occurred, thereby rectifying point 4* in the previous release regarding this controversy.
2. Rototom Sunsplash would like to publicly apologize to Matisyahu for having cancelled his concert and invite him to perform at the festival next Saturday 22 August, as was initially programmed in the lineup.
3. Rototom Sunplash admits that it made a mistake, due to the boycott and the campaign of pressure, coercion and threats employed by the BDS País Valencià because it was perceived that the normal functioning of the festival could be threatened. All of which prevented the organization from reasoning clearly as to how to deal with the situation properly.
4. After 22 years of history, Rototom Sunsplash reaffirms its commitment to a Culture of Peace and respect between cultures, including the freedom of belief as recognized in the Universal Declaration of Human Rights and the Spanish Constitution.
* “Rototom Sunsplash, after having repeatedly sought dialogue given the unavailability of the artist for comment, in order to clearly declare himself regarding the war and in particular the right of the Palestinian people to have their own State, has decided to cancel the performance of Matisyahu scheduled for August 22”

We will have more on this incident, and what it means as to the nature of the BDS movement.

The most important line in this blistering @WSJ editorial on the @Matisyahu affair: http://t.co/Hiw0il50ZT pic.twitter.com/zUyzPfh0oA

For now, it’s worth noting that it has exposed leading American BDS activists like Max Blumenthal, Ali Abunimah and Joe Catron, for what they are:

Sad that El Rototom festival will allow anti-Palestinian inciter of violence @matisyahu to perform after all http://t.co/GF69sucqjg

.@MaxBlumenthal links to a 4+ year old @matisyahu tweet to justify singling him out and banning him from a music festival. @Moriel_RZ

Any person who can read the founding document of the Hamas, and fail to see blasphemy against Allah and Islam, fails a test of decency.

Matisyahu is an “inciter of violence”?

Hey, @AliAbunimah, pics or it didn’t happen! Put up or shut up! #fail

My dear Matisyahu, NOW it is the time to say to them, “Take your dirty festival and shove it!”

With a smile, of course.

Oh no, the show goes on. He goes out there and rocks ’em. He gives the performance of his life and the crowd goes ape in its appreciation and adulation.

THAT shows the BDS folks…

If he doesn’t show and perform, BDS has won and they will declare far and wide that they have won. He should show up and perform well and thank the crowd for showing up and listening to him. That’s a loss for BDS.

Boy the BDS apparatchiks really hate to lose a fight. They come out swinging with anti-Semitic name calling immediately.