Similar to Psalm 137: “Jerusalem, if I forget you, fire not gonna come from me tongue.”

Matisyahu is the American Jewish musician who was banned by the Rototom Sunsplash Reggae Festival under pressure and threats from the Boycott, Divestments and Sanctions (BDS) movement. Leading American BDS activists support the ban.

The ban created a strong reaction from the Spanish press and government, which called the ban blatant and illegal religious discrimination.

The Festival organizers relented, apologized, and reinvited Matisyahu to appear.

Matisyahu’s appearance was greeted with joy by many at the festival, who didn’t like the way BDS politicized Reggae music.

His performance met with rave reviews, particularly his message of Peace (via El Mundo – Google Translate)

But BDS was not interested in peace. It sent out protesters, including many in the crowd waiving Palestinian flags while Matisyahu performed. 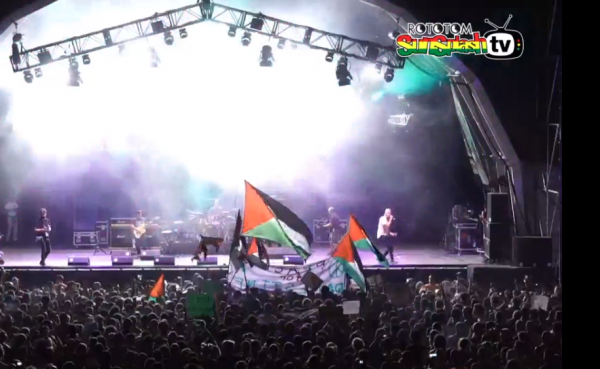 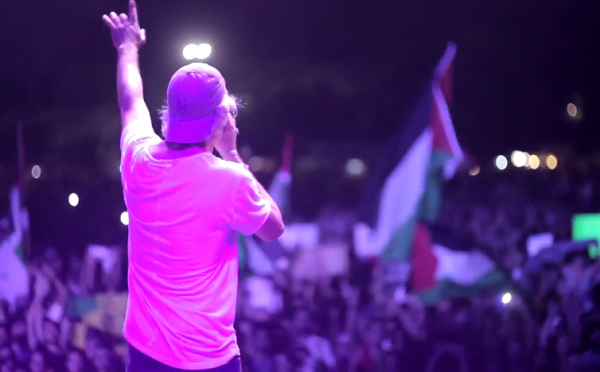 One of Matisyahu’s most famous songs is “Jerusalem.” If you add up all the different versions on YouTube, it has tens of millions of views.

1. By the rivers of Babylon, there we sat, we also wept when we remembered Zion.
2. On willows in its midst we hung our harps
3. For there our captors asked us for words of song and our tormentors [asked of us] mirth, “Sing for us of the song of Zion.”
4. “How shall we sing the song of the Lord on foreign soil?”
5. If I forget you, O Jerusalem, may my right hand forget [its skill]
6. May my tongue cling to my palate, if I do not remember you, if I do not bring up Jerusalem at the beginning of my joy.

This version has the song lyrics, so you can follow:

Given how it is one of his signature songs, “Jerusalem” is a natural part of any Matisyahu performance.

It would have been politically easier for Matisyahu to leave it out of his Rototom Sunsplash performance in the face of the protests unfolding right in front of him.

But he didn’t. He sang for peace, and for “Jerusalem.”

Here is his performance (video via Sussex Friends of Israel):

(added) Singing that song in the face of BDS hostility obviously meant a lot to him:

Tonight was not easy but at the end of it all I feel blessed to be given the opportunity. Thank You! pic.twitter.com/B9EJuuEbOT

As #Matisyahu sings of love and peace, the #BDS hold signs like this. Speaks volumes…@BDSFail @matisyahu pic.twitter.com/77B6qQryrY

THAT was a “gutsy call”…

A class act all the WAY!

You gotta love this Matisyahu! Talk about ramming it down their anti-Semitic throats, not only is he singing reggae, some of the most Judaeophilic music is found in reggae, but he also give a brief history lesson on Jerusalem: not yours, mine!

I’m glad he showed up and performed. It was a huge win for Jewish people and a crushing loss for BDS.

Truth is stranger than fiction. Where did those flags come from? They are from the flag of the Arab Revolt from WWI. Arabs are a nationality. Palestine was only a name given to a location.

Why are the flags of the Ba’ath Party, Jordan, P.A., the Sahrawi Arab Democratic Republic and the Arab Revolt nearly the same, and in some cases the same?

The answer goes back to World War I. Upon British diplomat Sir Mark Sykes’ instigation, but not completely according to his wishes, the Arab Bureau was created. It was Sykes and his fellows in this group who revived ancient Greek and Roman names for Middle Eastern regions. Such terms in common use today include “Syria”, “Palestine”, “Iraq” and “Mesopotamia”. He also designed the Flag of the Arab Revolt, a combination of green, red, black and white. Variations on his design are today the flags of Jordan, Iraq, Syria, Egypt, Sudan, Kuwait, Yemen, the United Arab Emirates and the P.L.O which did not exist as nationalities before the First World War.

The flag was designed by the British diplomat Sir Mark Sykes, in an effort to create a feeling of “Arab-ness” in order to fuel the revolt. Although the Arab Revolt (1916-1918) was only very limited in scope and concerted by the British rather than by Arabs themselves, the flag influenced the national flags of a number of emerging Arab states after World War I. Flags inspired by that of the Arab revolt include those of Egypt, Jordan, Iraq, Kuwait, Sudan, Syria, the United Arab Emirates, Yemen, the Palestinian national movement (also used by the PLO and by the Palestinian Authority), Somaliland, theSahrawi Arab Democratic Republic and Libya.

The horizontal colors stand for the Abbasid (black), Umayyad (white) and Fatimid (green) Caliphates. The red triangle refers to the Hashemite dynasty.

The Hashemites were allies of the British in the conflict against the Ottoman Empire. After the war ended, the Hashemites achieved or were granted rule in the Hejaz region of Arabia, Jordan, formally known as the Hashemite Kingdom of Jordan, briefly in Greater Syria, and Iraq.

Greater Syria was dissolved after only a few months existence, in 1920. The Hashemites were overthrown in the Hejaz in 1925 by the House of Saud, and in Iraq in 1958 by a coup d’etat, but retained power in Jordan.