“The disinvitation of Matisyahu makes no political sense”

Benjamin Norton is a leading author who favors the boycott movement (BDS) against Israel.

Norton writes for the anti-Zionist Mondoweiss website, as well as a slew of other places on the topic of how bad Israel is. While I don’t agree with most of what Norton says, he certainly is prolific and an upcoming opinion-leader in that sphere.

So when I saw Norton pen a column severely criticizing the ban on American Jewish musician Matisyahu at the behest of a Spanish branch of the BDS movement, I was, well, surprised. All the more so because leading American BDS activists like Ali Abunimah and Max Blumenthal were seeking to justify the ban because Matisyahu was too pro-Israel. 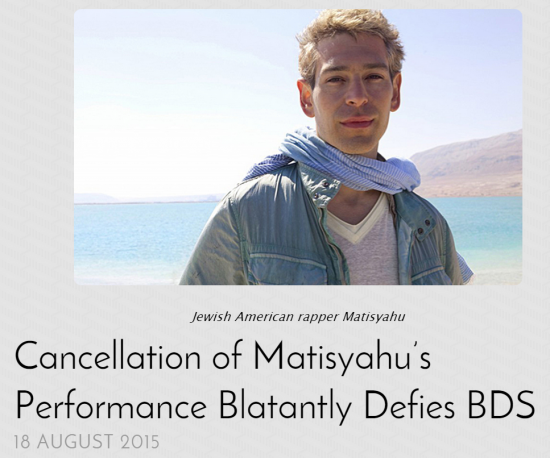 Jewish American rapper Matisyahu was disinvited from a music festival in Spain because he refused to express a position on the Israel-Palestine conflict. Organizers of the Rototom Sunsplash European Reggae Festival say they were pressured by members of the Boycott, Divestment, and Sanctions (BDS) movement—an international movement that seeks to pressure Israel to abide by international law through peaceful economic means.

The cancellation of Matisyahu’s performance, however, blatantly defies the most basic principles of the BDS movement.

The founders of BDS, which was called for by Palestinian intellectuals and activists, made it absolutely clear years ago: BDS targets institutions, not individuals….

The disinvitation of Matisyahu makes no political sense. The artist has made it clear that he is not a hardline Zionist. And, even if he were, it would not matter, as BDS does not target individuals based upon their political views. Once again, BDS targets institutions, not individuals.

In the end, the cancellation of the Matisyahu performance only serves to further perpetuate the conflation of Zionism, Judaism, and Jewishness—a conflation that is ultimately anti-Semitic.

By cutting ties with a prominent Jewish American musician because he refuses to criticize Israel, activists who claim to be members of the BDS movement are not only contradicting the movement’s most fundamental principles; they are furthermore giving ammunition to those who seek to demonize the peaceful, multiracial, and interreligious BDS movement, an anti-racist movement that seeks equality, liberation, and justice for all.

While I disagree with some of the characterizations — for example, in reality BDS does boycott individuals, and it is not a peaceful movement which seeks justice for all — the overall point was pretty much the point that Zionist supporters of Matisyahu are making: Keep politics out of music, and don’t single out Jews for extra political scrutiny. 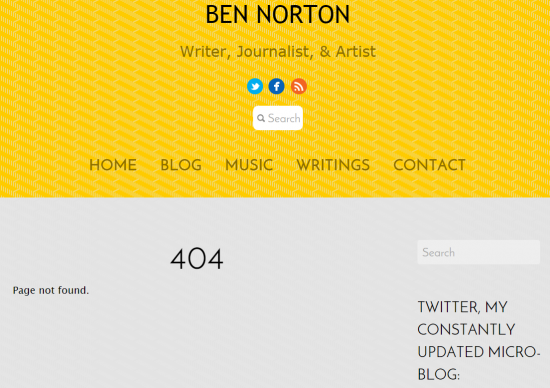 And it stands in contrast to Norton’s subsequent post at Mondoweiss, which uncritically repeats the party-line by the leader of the BDS movement, Omar Barghouti, that cancellation of Matisyahu’s appearance was justified because Matisyahu allegedly is a “bigot” (i.e., he is Zionist and supports Israel): 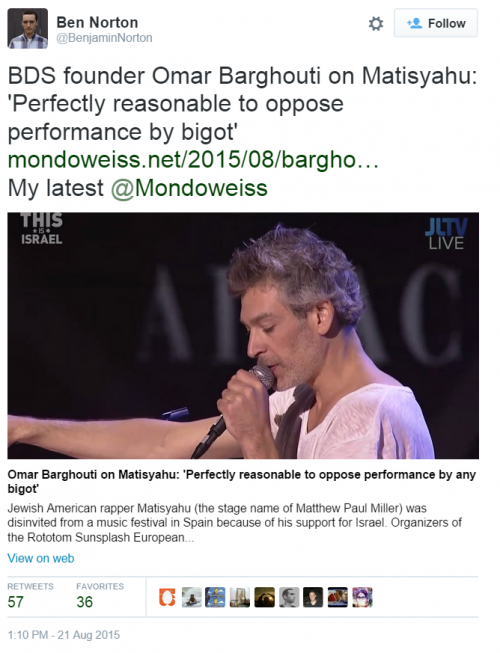 This whole episode turned out bad for BDS which means that it turned out good for the rest of us. Removing Norton’s post reveals dissension within BDS ranks where the more levelheaded are being crowded out by the more radical faction. That will not turn out well for them, either.

So, after saying something even a quarter of a way reasonable, the post goes missing.

A dog always returns to its vomit, I guess…

The true bigot is Omar Barghouti himself, doing his doctorate at Tel Aviv University.

What are the Israelis trying to prove by educating this monster who would deny them the right to live?

Deleting his rational comment after pressure, no doubt, from fellow activists sounds cowardly to me. Sure, it took some courage to post it in the first place. But cowardice won.

This alleged distinction between “institutions” and “individuals” seems to me to be utterly fallacious and illogical, a feckless and dishonest way to retreat from BDS’s inherently idiotic and close-minded positions. Institutions are necessarily made up of individuals, are they not? So, by banning, for example, an Israeli university from some international conference, one is unavoidably punishing the predominantly Jewish professors who work there. The whole line of reasoning is moronic on its face.

Words have no meaning in the BDS world. Muslims are doing everything they can to kill every Jew, wherever that Jew may be found. In this, interestingly enough, the Muslims are not bigots but declare themselves to be the oppressed and wretched of the earth. Jews, should they stand up for the continued existence of Jews, wherever Jews may be found, are bigots for saying Jewish lives matter.
So, in this topsy turvy world of meaningless language, Jews must be ostracized for wanting to live.

Okay. Check. Got it. Carry on.

(I am Ben Norton. I emailed the following statement to the author, asking for it to be posted in the article. He told me to post it as a comment.)

The nonviolent BDS movement targets institutions, not individuals. BDS opposes individual boycotts, yet Matisyahu’s ties to numerous Israeli institutions exempt him from unaffiliated individual status and satisfy the necessary conditions for what the Palestinian Campaign for the Academic and Cultural Boycott of Israel (PACBI) calls “common sense” boycotts (i.e., those “that conscientious citizens around the world may call for in response to what they widely perceive as egregious individual complicity in, responsibility for, or advocacy of violations of international law (such as war crimes or other grave human rights violations), racial violence, or racial slurs”).

A boycott of Matisyahu is justifiable not because of his individual political beliefs, but rather because of his ties to and work for Israeli institutions.

When I first wrote the above statement, I was not aware of the extent to which Matisyahu is tied to the Israeli government. The following constitute just a few examples of such ties:

– Matisyahu’s music has been used in Israeli state propaganda videos.

– He has helped raise money for the Israeli army.

– His lyrics are co-written by a settler in an illegal settlement in occupied territory who works for Honenu, a legal aid organization that, in the words of Israeli publication +972 Magazine “provides legal services to suspected terrorists, violent settlers and gives financial support to their families.”

These are just some examples.

If Matisyahu were not tied to the Israeli government in such ways, I would unequivocally oppose a boycott of him.

I removed the above statement from my website because my views change based upon evidence, and the evidence indicates that Matisyahu, given his work for Israeli institutions, according to BDS guidelines, can be the subject of a “common sense” boycott.

Mr. Norton,
I respect your ability to evolve your opinions in response to new information.
Please tell me something. You decided Matisyahu should be boycotted because of his ties to the Israeli government. You want to boycott the Israeli government because of their control over disputed territory, commonly considered an occupation. I would appreciate some background information about this position of yours:
Please explain why the “ancient homeland of Palestine” looks exactly like the approximate 1/3 of the British Mandate that the British made up in 1920 after giving “Trans-Jordan” to the Hashemite clan (and which was clearly inspired by the ancient Jewish Kingdoms).
Please explain why the Arabs of the region called Palestine were massacring Jews already in the 1920s and 1930, as well as allying themselves with Germany in WWII, long before the start of the “occupation”.
Please explain why terror attacks against then-smaller Israel were carried out from the areas today called the Palestinian territories throughout the 1950s and 1960’s until the war in 1967, when Arab armies declared genocidal intent and amassed on Israel’s “borders” (actually, armistice lines).
Please explain why the Palestine Liberation Organization was founded in 1964, three years before the “occupation” began.
Please explain why the original version of the PLO charter explicitly denied any claim on Gaza and the West Bank, which were under Arab rule at the time, whereas today they claim those exact territories as an ancient homeland (although if you look at the PLO’s and Hamas’ logos, you see a map which includes 100% of Israel).
Please explain why there were no calls for a Palestinian state from 1948-1967.
Please explain why the Arabs, those later called Palestinians, rejected the two-state solution of partition in 1947 and launched a war of genocide against the Jews as soon as Israel was declared?
Please explain why the Palestinians have rejected every offer of compromise toward a state, including Israel’s offer in 2000 which offered the PLO nearly all of their official territorial demands in Gaza and the West Bank.
And there is much, much more than this to say.
I would be happy to know if any of these requests for clarification lead you to any information which might spur you to evolve your opinions further.

Ben Norton removed his comments because he can’t deal with facts about what BDS truly is.

The BDS movement is Jew hate.

BDS lies constantly. An example would be BDS’s Block The Boat movement which constantly lied about delaying ZIM ocean cargo ships. Ben Norton was actively involved in this miserable BDS failure and he refused to deal with the facts I often pointed out to him about the incorrect info he was tweeting. In the mean time, BDS Block The Boat is dead and ZIM shipping is doing better than they have in a long time.

Another glimmer of sanity on the anti-Israel left: Banksy, whose views on just about everything, including Israel, are exactly what you’d expect, has nevertheless drawn a line on how much craziness he’s willing to tolerate.