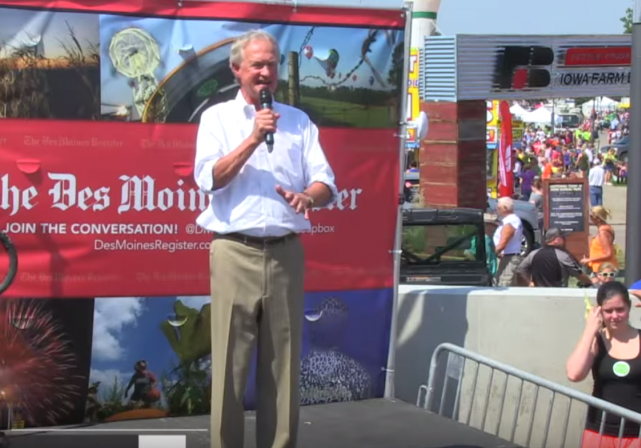 “After the mistake we made with invading Iraq, I felt it was my responsibility, my responsibility to do something about fixing it. Yes, I voted against it but that’s not good enough. We need to fix it. And a couple of days ago, Jeb Bush was saying in 2009, oh it was mission accomplished, Iraq was a secure place, and he’s just drinking some neo-con Kool-aid to think that Iraq was secure,” said Chafee.

2004 called, they want their political buzzword back.

Chafee continued, “and we just cannot have these people come back, come back, come back to make those same kind of mistakes. Their delusional if they think Iraq was secure and the mission was accomplished. We just can’t have those people come back because they’re not telling us the truth, just like they didn’t when they said Saddam Hussein had WMDs. It just wasn’t the truth. We want our good leaders to tell our citizens the truth.”

Chafee hasn’t been shy in reminding voters that while serving in the U.S. Senate, he voted against the Iraq war while Mrs. Clinton voted in favor.

Chafee managed to work in a pretty solid jab at Hillary Clinton:

Yikes. Clinton in crowd. Linc Chafee tells crowd one thing he's most proud of is that he's "never had any scandals." #wingding

WARNING: do not attempt to operate heavy machinery as full speech may cause severe drowsiness:

We want our good leaders to tell our citizens the truth.

There is a treatment for Linc..

Man of the nerds… GO Linc!

Neo-con is dog whistle for Jooooooooz.

Neoconservatism was a Jewish-influenced movement. Per Wikipedia:

“The term “neoconservative” refers to those who made the ideological journey from the anti-Stalinist left to the camp of American conservatism. Neoconservatives frequently advocate the promotion of democracy and promotion of American national interest in international affairs, including by means of military force, and are known for espousing disdain for communism and for political radicalism. Many early neoconservative thinkers were Jewish and published articles in “Commentary,” published by the American Jewish Committee. They spoke out against the New Left, and in that way helped define the movement.”

These were the wiser ones. The majority remained wedded to Marxist/socialist/progressive ideologies, as they do to this day, as evidenced by about 70% voting for Barry in 2012. It has always puzzled me how an intelligent people can vote stupidly in such overwhelming numbers.

With back stabbing Republican’s like Lincoln Chafee who needs Democrats? Thank goodness he has officially switched Parties.