“Even though it’s a long time ago, it’s affecting us today.” 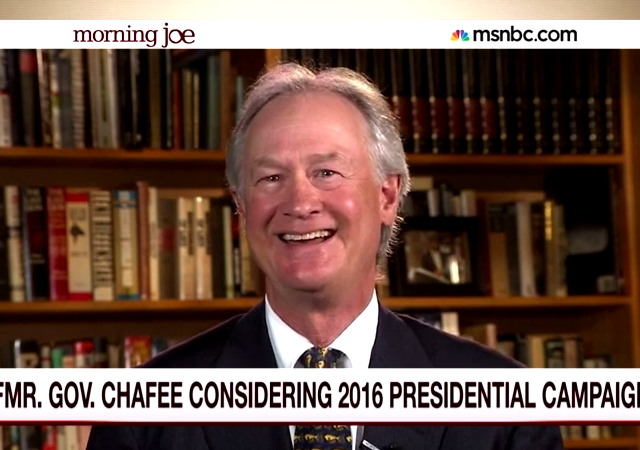 In an appearance on MSNBC’s Morning Joe Friday, he suggested that Hillary’s vote for the war in Iraq makes her a poor choice for president.

Chafee solves one problem for Democrats by providing Hillary with another challenger but reinforces the idea that the Democratic bench is made up of faces from the past.

Yesterday, I called Chafee a candidate of the political past, but it’s worse than I imagined. Chafee wants to go back to the Cold War when it comes to Iran, and back to the “reset button” when it comes to Russia and Putin. On Iran, Chafee said that direct diplomacy and containment “worked with Gorbachev,” as if Gorbachev and Ali Khameini are at all analogous in temperament, ideology, or end goals. In fact, Chafee sounds here like the Barack Obama of 2007-8, who argued that Iran was a “tiny” country that presented no real threat to the US.

Chafee is also hitting Hillary on her ties to Wall Street. Nick Gass of Politico:

Lincoln Chafee: Clinton ‘a little too close to Wall Street’

Lincoln Chafee on Friday continued to slam potential 2016 rival Hillary Clinton, saying she has been “a little too close to Wall Street.”

The former Rhode Island governor and senator reiterated that there will likely be many similarities in domestic policy between himself and Clinton, but said that they might differ on some economic issues.

“On the economy, of course, she has been a little too close to Wall Street, and that’s Sen. [Elizabeth] Warren’s point,” he said. “I have a strong record of voting against the Bush tax cuts, the vote that favored the wealthy.

I don’t know about you, but I’m really looking forward to the Democratic debates.

Hmmm…. Imagine that. A former “Republican,” who rode the coat-tails of his father to elected office, abandons the party to be an “Independent” (because the Deemocrats won’t have him) and then finally decides to show his TRUE colors and campaign as a Democrat.

My guess is that he gets less than 1% of the vote in any primary anywhere.

With all due respect to his late father, who served with distinction (although certainly not the sort of conservative we require these days), Linc’s an idiot. And while he’s a “face from the past” like Hillary and Biden and Jerry Brown, he was never a Democrat.

But if a party is looking for a guy who will stab them in the back and step over their body without getting his shoes messy, Linc’s their boy. It’s about the only thing he’s managed to do without screwing up in his life.

The notion that the Democrats would nominate a former Republican to be their presidential standard-bearer is ludicrous on its face!